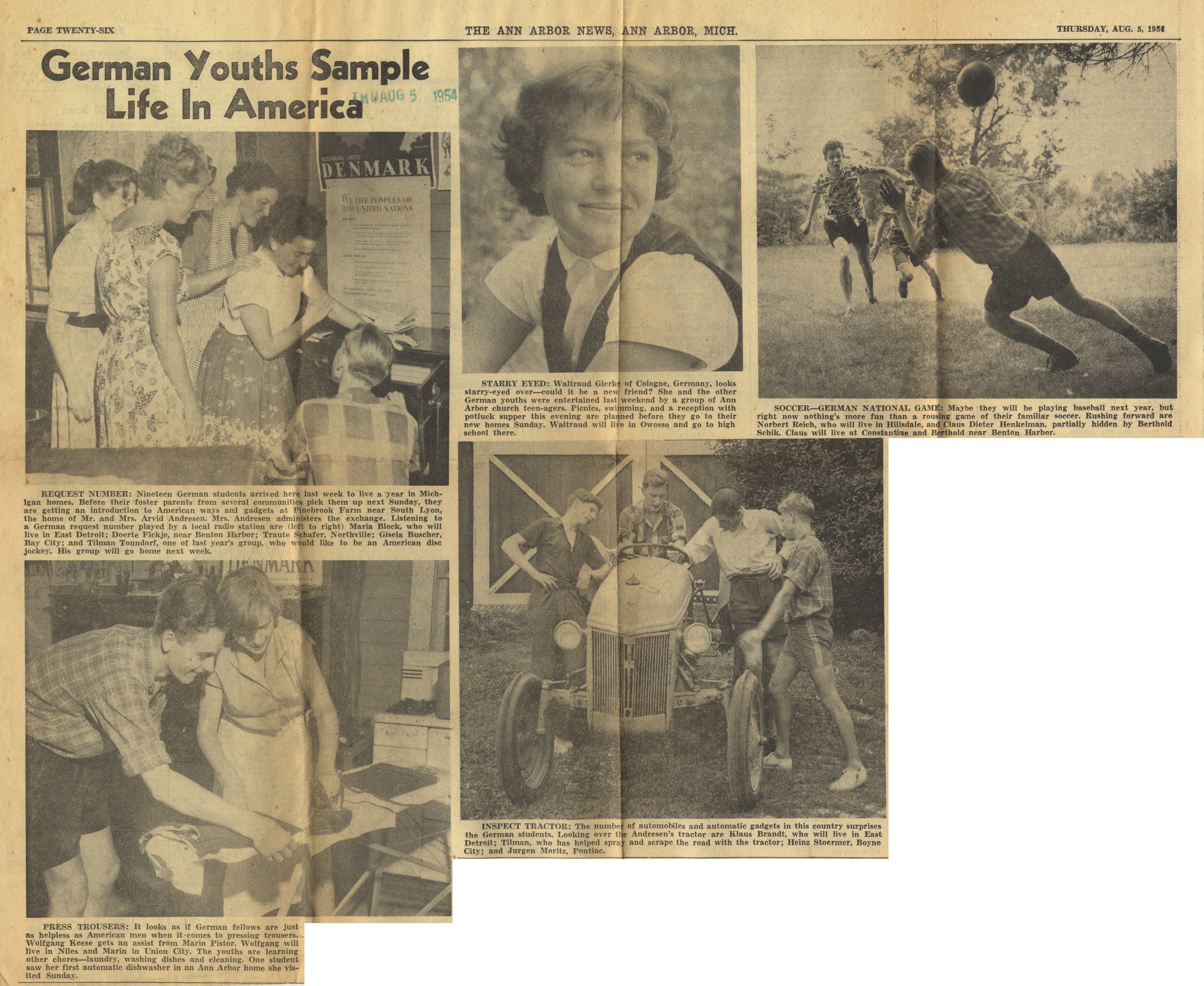 REQUEST NUMBER: Nineteen German students arrived here last week to live a year in Michigan homes. Before their foster parents from several communities pick them up next Sunday, they are getting an introduction to American ways and gadgets at Pinebrook Farm near South Lyon, the home of Mr. and Mrs. Arvid Andresen. Mrs. Andresen administers the exchange. Listening to a German request number played by a local radio station are (left to right) Maria Block, who will live in East Detroit; Doerte Fickje, near Benton Harbor; Traute Schafer, Northville; Gisela Buscher, Bay City; and Tilman Tonndorf, one of last year's group, who would like to be an American disc jockey. His group will go home next week.

PRESS TROUSERS: It look as if German fellows are just as helps as American men when it comes to pressing trousers. Wolfgang Keese gets an assist from Marin Pistor. Wolfgang will live in Niles and Marin in Union City. The youths are learning other chores - laundry, washing dishes and cleaning. One student saw her first automatic dishwasher in an Ann Arbor home she visited Sunday.

STARRY EYED: Waltraud Gierke of Cologne, Germany, looks starry-eyed over - could it be a new friend? She and the other German youths were entertained last weekend by a group of Ann Arbor church teen-agers. Picnics, swimming, and a reception with potluck supper this evening are planned before they go to their new homes Sunday. Waltraud will live in Owosso and to high school there.

SOCCER - GERMAN NATIONAL GAME: Maybe they will be playing baseball next year, but right now nothing's more fun than a rousing game of their familiar soccer. Rushing forward are Norbert Reich, who will live in Hillsdale, and Claus Dieter Henkelman, partially hidden by Berthold Schik. Claus will live at Constantine and Berthold near Benton Harbor.

INSPECT TRACTOR: The number of automobiles and automatic gadgets in this country surprises the German students. Looking over the Andresen's tractor are Klaus Brandt, who will live in East Detroit; Tilman, who has helped spray and scrape the road with the tractor; Heinz Stoermer, Boyne City; and Jurgen Moritz, Pontiac.