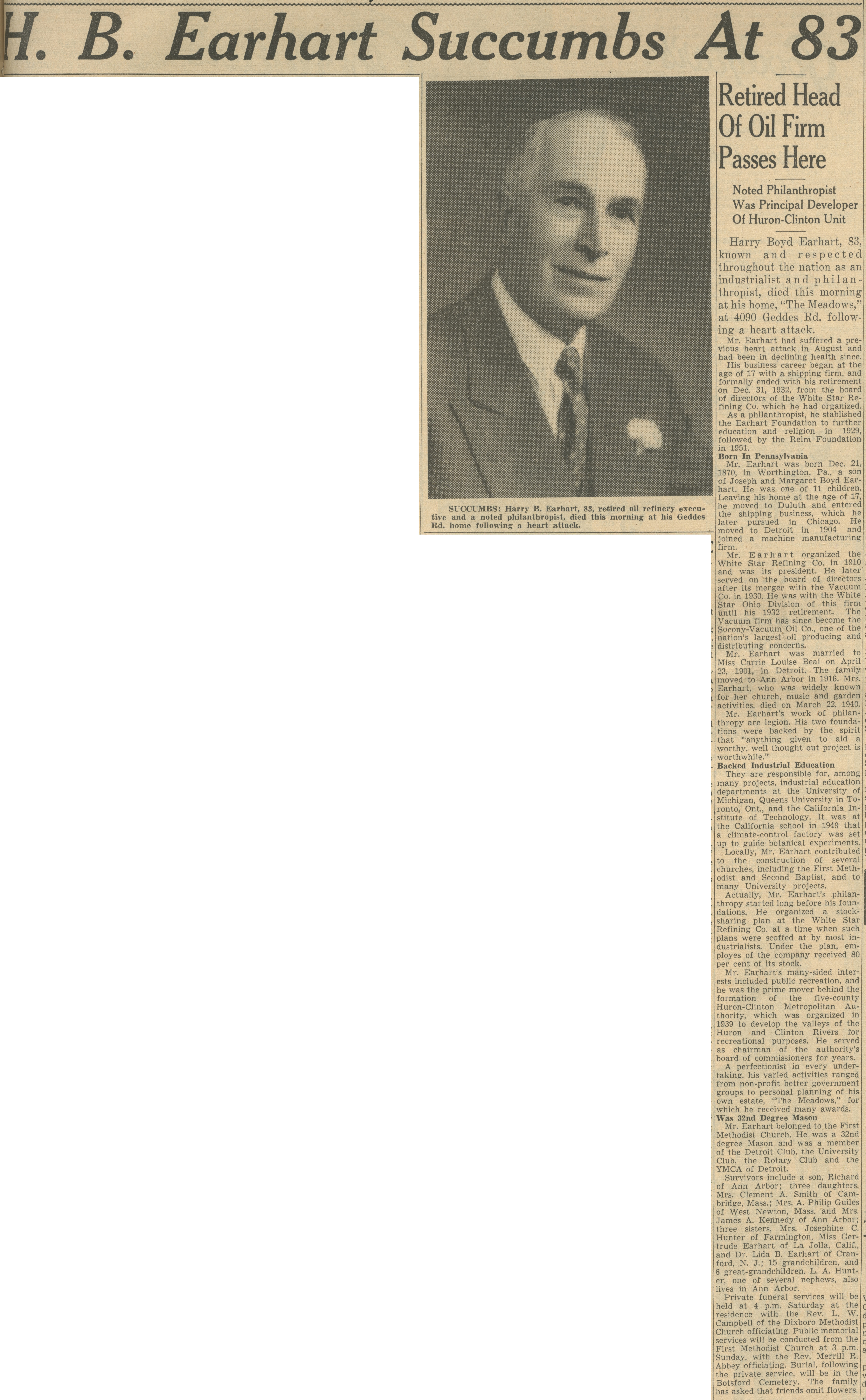 Retired Head Of Oil Firm Passes Here Noted Philanthropist Was Principal Developer of Huron-Clinton Unit Harry Boyd Earhart, 83, known and respected throughout the nation as an industrialist and philanthropist, died this morning at his home, "The Meadows," at 4090 Geddes Rd. following a heart attack. Mr. Earhart had suffered a previous heart attack in August and had been in declining health since. His business career began at the age of 17 with a shipping firm, and formally ended with his retirement on Dec. 31, 1932, from the board of directors of the White Star Refining Co. which he had organized. As a philanthropist, established the Earhart Foundation to further education and religion in 1929, followed by the Relm Foundation in 1951. Born In Pennsylvania Mr. Earhart was born Dec. 21, 1870, in Worthington, Pa., a son of Joseph and Margaret Boyd Earhart. He was one of 11 children. Leaving his home at the age of 17, he moved to Duluth and entered the shipping business, which he later pursued in Chicago. He moved to Detroit in 1904 and joined a machine manufacturing firm. Mr. Earhart organized the White Star Refining Co. in 1910 and was its president. He later served on the board of directors after its merger with the Vacuum Co. in 1930. He was with the White Star Ohio Division of this firm until his 1932 retirement. The Vacuum firm has since become the Socony-Vacuum Oil Co., one of the nation's largest oil producing and distributing concerns. Mr. Earhart was married to Miss Carrie Louise Beal on April 23, 1901, in Detroit. The family moved to Ann Arbor in 1916. Mrs. Earhart, who was widely known for her church, music and garden activities, died on March 22, 1940. Mr. Earhart's work of philanthropy are legion. His two foundations were backed by the spirit that "anything given to aid a worthy, well thought out project is worthwhile." Backed Industrial Education They are responsible for, among many projects, industrial education departments at the University of Michigan, Queens University in Toronto, Ont., and the California Institute of Technology. It was at the California school in 1949 that a climate-control factory was set up to guide botanical experiments. Locally, Mr. Earhart contributed to the construction of several churches, including the First Methodist and Second Baptist, and to many University projects. Actually, Mr. Earhart's philanthropy started long before his foundations. He organized a stock-sharing plan at the White Star Refining Co. at a time when such plans were scoffed at by most industrialists. Under the plan, emplyes of the company received 80 per cent of its stock. Mr. Earhart's many-sided interests included public recreation, and he was the prime mover behind the formation of the five-county Huron-Clinton Metropolitan Authority, which was organized in 1939 to develop the valleys of the Huron and Clinton Rivers for recreational purposes. He served as chairman of the authority's board of commissioners for years. A perfectionist in every undertaking, his varied activities ranged from non-profit better government groups to personal planning of his own estate, "The Meadows," for which he received many awards. Was 32nd Degree Mason Mr. Earhart belonged to the First Methodist Church. He was a 32nd degree Mason and was a member of the Detroit Club, the University Club, the Rotary Club and the YWCA of Detroit. Survivors include a son, Richard of Ann Arbor; three daughters, Mrs. Clement A. Smith of Cambridge, Mass.; Mrs. A. Philip Guiles of West Newton, Mass. and Mrs. James A. Kennedy of Ann Arbor; three sisters, Mrs. Josephine C. Hunter of Farmington, Miss Gertrude Earhart of La Jolla, Calif., and Dr. Lida B. Earhart of Cranford, N. J.; 15 grandchildren, and 6 great-grandchildren. L. A. Hunter, one of several nephews, also lives in Ann Arbor. Private funeral services will be held at 4 p.m. Saturday at the residence with the Rev. L. W. Campbell of the Dixboro Methodist Church officiating. Public memorial services will be conducted from the First Methodist Church at 3 p.m. Sunday, with the Rev. Merrill R. Abbey officiating. Burial, following the private service, will be in the Botsford Cemetery. The family asked that friends omit flowers.