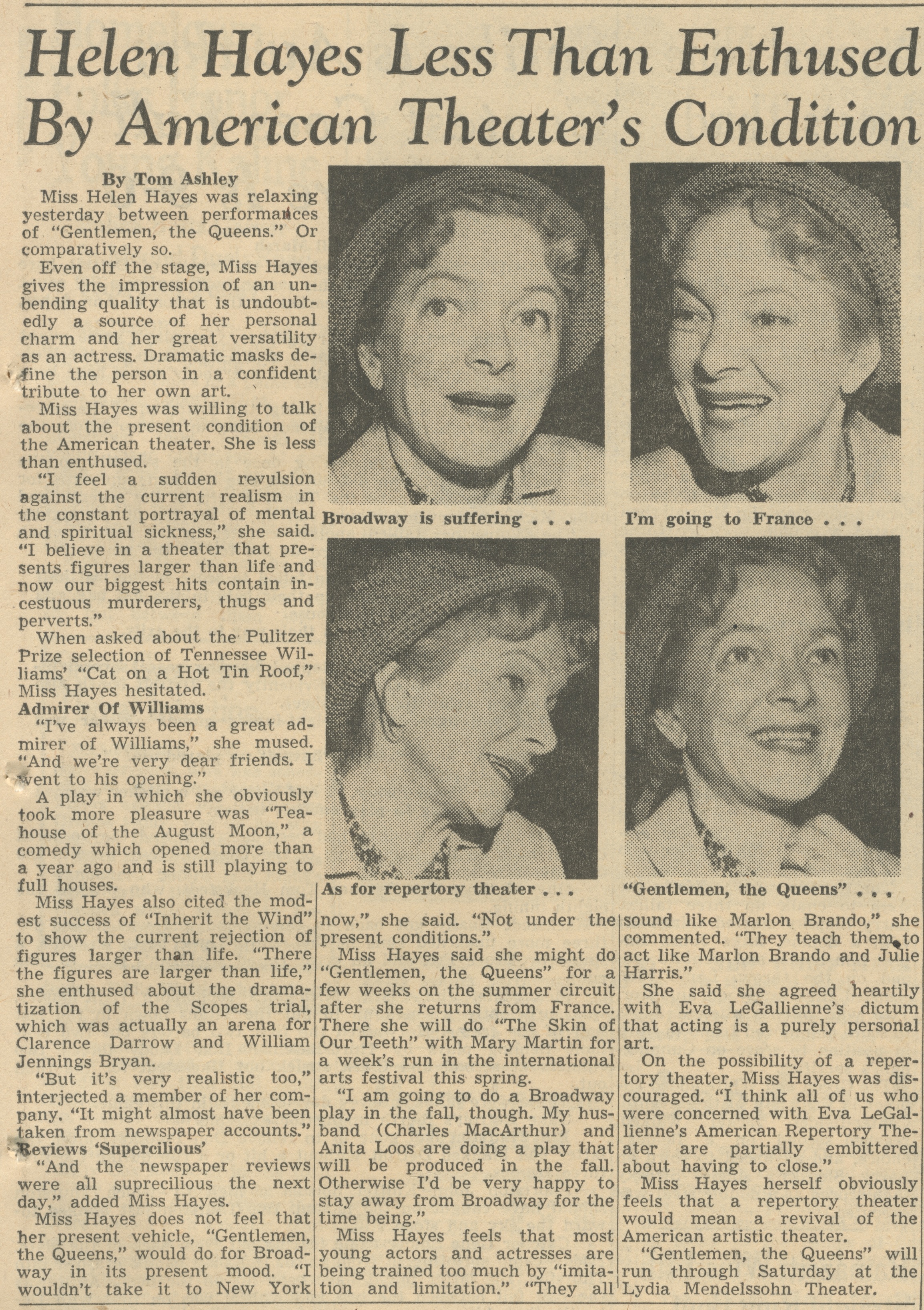 Miss Helen Hayes was relaxing yesterday between performances of “Gentlemen, the Queens.” Or comparatively so.

Even off the stage, Miss Hayes gives the impression of an unbending quality that is undoubtedly a source of her personal charm and her great versatility as an actress. Dramatic masks define the person in a confident tribute to her own art.

Miss Hayes was willing to talk about the present condition of the American theater. She is less than enthused.

“I feel a sudden revulsion against the current realism in the constant portrayal of mental and spiritual sickness,” she said. “I believe in a theater that presents figures larger than life and now our biggest hits contain incestuous murderers, thugs and perverts.”

When asked about the Pulitzer Prize selection of Tennessee Williams’ “Cat on a Hot Tin Roof,” Miss Hayes hesitated.

“I’ve always been a great admirer of Williams,” she mused. “And we’re very dear friends. I went to his opening.”

A play in which she obviously took more pleasure was “Teahouse of the August Moon,” a comedy which opened more than a year ago and is still playing to full houses.

Miss Hayes also cited the modest success of “Inherit the Wind” to show the current rejection of figures larger than life. “There the figures are larger than life,” she enthused about the dramatization of the Scopes trial, which was actually an arena for Clarence Darrow and William Jennings Bryan.

“But it’s very realistic too,” interjected a member of her company. “It might almost have been taken from newspaper accounts.”

“And the newspaper reviews were all supercilious the next day,” added Miss Hayes.

Miss Hayes does not feel that her present vehicle, “Gentlemen, the Queens,” would do for Broadway in its present mood. “I wouldn’t take it to New York now,” she said. “Not under the present conditions.”

Miss Hayes said she might do “Gentlemen, the Queens” for a few weeks on the summer circuit after she returns from France. There she will do “The Skin of Our Teeth” with Mary Martin for a week’s run in the international arts festival this spring.

“I am going to do a Broadway play in the fall, though. My husband (Charles MacArthur) and Anita Loos are doing a play that will be produced in the fall. Otherwise I’d be very happy to stay away from Broadway for the time being.”

Miss Hayes feels that most young actors and actresses are being trained too much by “imitation and limitation.” “They all sound like Marlon Brando,” she commented. “They teach them to act like Marlon Brando and Julie Harris.”

She said she agreed heartily with Eva LeGallienne’s dictum that acting is a purely personal art.

On the possibility of a repertory theater, Miss Hayes was discouraged. “I think all of us who were concerned with Eva LeGallienne’s American Repertory Theater are partially embittered about having to close.”

Miss Hayes herself obviously feels that a repertory theater would mean a revival of the American artistic theater.

“Gentlemen, the Queens” will run through Saturday at the Lydia Mendelssohn Theater.

As for repertory theater . . .