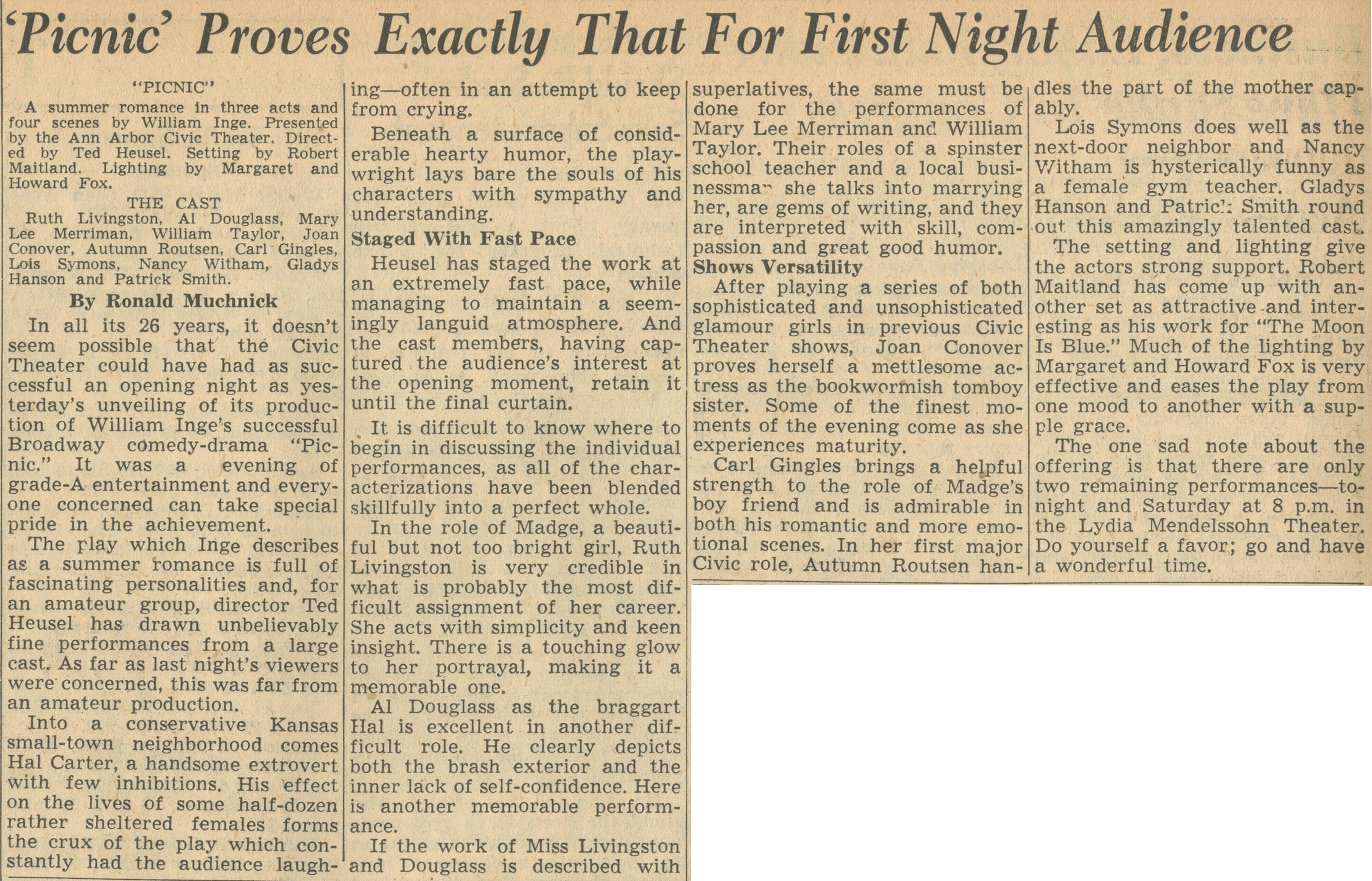 ﻿‘Picnic Proves Exactly That For First Night Audience<br><br>by the Ann Arbor Civic Theater. Directed by Ted Heusel. Setting by Robert Maitland.^ Lighting by Margaret and<br><br>Ruth Livingston, A1 Douglass, Mary Lee Merrlman, William Taylor, Joan Conover, Autumn Routsen, Carr Gingles, Lois Symons, Nancy Witham, Gladys Hanson and Patrick Smith.<br><br>By Ronald Muchnick<br><br>In all its 26 years, it doesn’t seem possible that the Civic Theater could have had as successful an opening night as yesterday's unveiling of its production of William Inge’s successful Broadway comedy-drama “Picnic.” It was a evening of grade-A entertainment and everyone concerned can take special pride in the achievement.<br><br>The play which Inge describes as a summer Romance is full of fascinating personalities and, for an amateur group, director Ted Heusel has drawn unbelievably fine performances from a large cast. As far as last night’s viewers were concerned, this was far from an amateur production.<br><br>Into a conservative Kansas small-town neighborhood comes Hal Carter, a handsome extrovert with few inhibitions. His effect the lives of some half-dozen rather sheltered females forms the crux of the play which constantly had the audience laugh-<br><br>ing—often in an attempt to keep from crying.<br><br>Beneath a surface of considerable hearty humor, the playwright lays bare the souls of his characters with sympathy and understanding.<br><br>Staged With Fast Pace<br><br>Heusel has staged the work at an extremely fast pace, while managing to maintain a seemingly languid atmosphere. And the cast members, having captured the audience’s interest at the opening moment, retain it until the final curtain.<br><br>. It is difficult to know where to begin in discussing the individual performances, as all of the characterizations have been blended skillfully into a perfect whole.<br><br>In the role of Madge, a beautiful but not too bright girl, Ruth Livingston is very credible in what is probably the most difficult assignment of her career. She acts with simplicity and keen insight. There is a touching glow to her portrayal, making it a memorable one.<br><br>A1 Douglass as the braggart Hal is excellent in another difficult role. He clearly depicts both the brash exterior and the inner lack of self-confidence. Here is another memorable perform-<br><br>superlatives, the same must be done for the performances of Mary Lee Merriman and William Taylor. Their roles of a spinster school teacher and a local busi-nessma-- she talks into marrying her, are gems of writing, and they are interpreted with skill, compassion and great good humor. Shows Versatility<br><br>After playing a series of both sophisticated and unsophisticated glamour girls in previous Civic Theater shows, Joan Conover proves herself a mettlesome actress as the bookworfnish tomboy sister. Some of the finest moments of the evening come as she experiences maturity.<br><br>Carl Gingles brings a helpful strength to the role of Madge's boy friend and is admirable in both his romantic and more emotional scenes. In her first major Civic role, Autumn Routsen han-<br><br>dles the part of the mother capably.<br><br>Lois Symons does well as the next-door neighbor and Nancy V/itham is hysterically funny as a female gym teacher. Gladys Hanson and Patric?: Smith round out this amazingly talented cast.<br><br>The setting and lighting give the actors strong support. Robert Maitland has come up with another set as attractive and interesting as his work for “The Moon Is Blue.” Much of the lighting by Margaret and Howard Fox is very effective and eases the play from one mood to another with a supple grace.<br><br>The one sad note about the offering is that there are only two remaining performances—tonight and Saturday at 8 p.m. in the Lydia Mendelssohn Theater. Do yourself a favor; go and have a wonderful time.