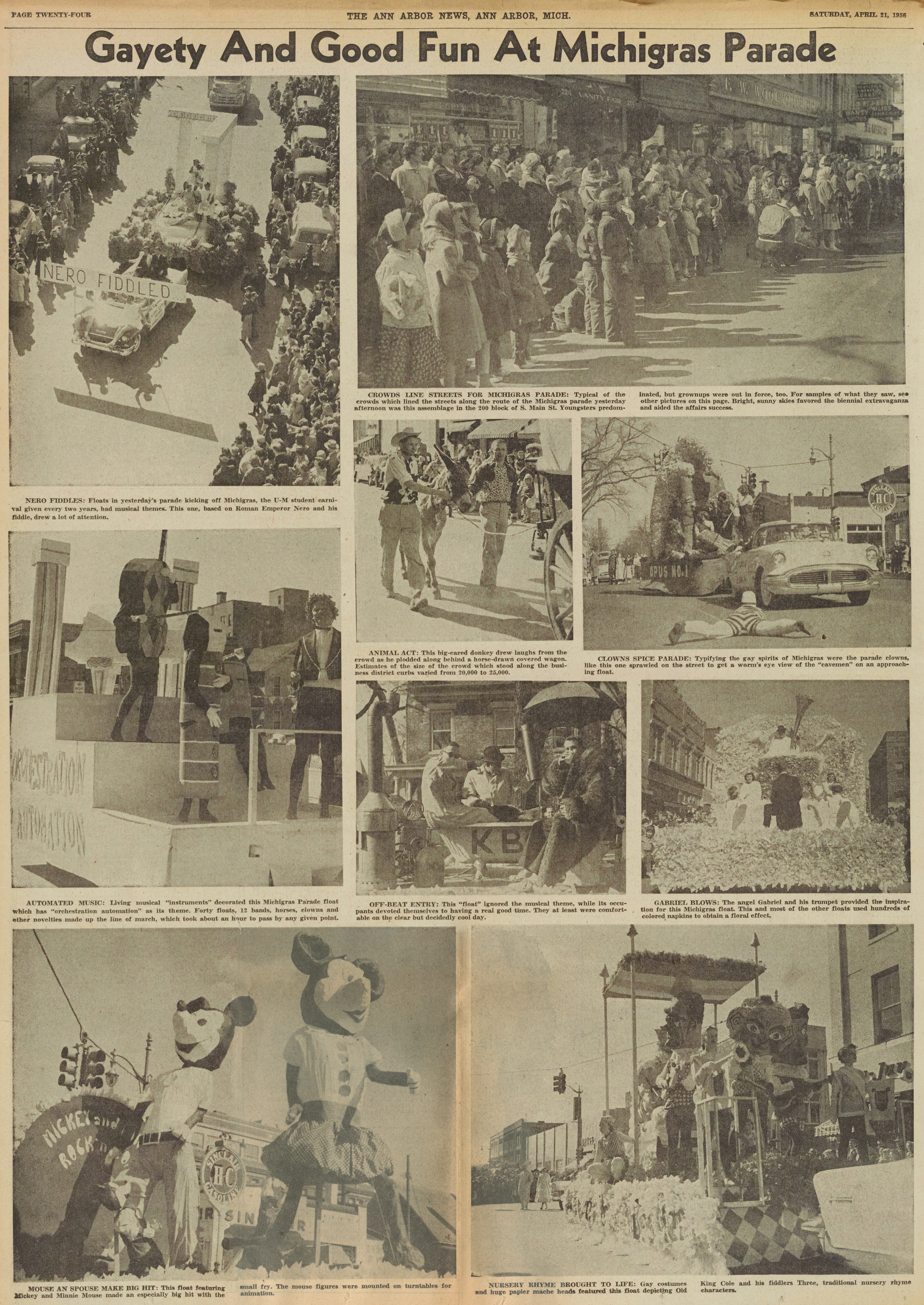 NERO FIDDLES: Floats in yesterday's parade kicking off Michigras, the U-M student carnival given every two years, had musical themes. This one, based on Roman Emperor Nero and his fiddle, drew a lot of attention.

CROWDS LINE STREETS FOR MICHIGRAS PARADE: Typical of the crowds which lined the streets along the route of the Michigras parade yesterday afternoon was this assemblage in the 200 block of S. Main St. Youngsters predominated, but grownups were out in force, too. For samples of what they saw, see other pictures on this page. Bright, sunny skies favored the biennial extravaganza and aided the affairs success.

ANIMAL ACT: This big-eared donkey drew laughs from the crowd as he plodded along behind a horse-drawn covered wagon. Estimates of the size of the crowd which stood along the business district curbs varied from 20,000 to 25,000.

CLOWNS SPICE PARADE: Typifying the gay spirits of Michigras were the parade clowns, like this one sprawled on the street to get a worm's eye view of the "cavemen" on an approaching float.

AUTOMATED MUSIC: Living musical "instruments" decorated this Michigras Parade float which has "orchestration automation" as its theme. Forty floats, 12 bands, horses, clowns and other novelties made up the line of march, which took about an hour to pass by any given point.

OFF-BEAT ENTRY: This "float" ignored the musical theme, while its occupants devoted themselves to having a real good time. They at least were comfortable on the clear but decidedly cool day.

GABRIEL BLOWS: The angel Gabriel and his trumpet provided the inspiration for this Michigras float. This and most of the other floats used hundreds of colored napkins to obtain a floral effect.

MOUSE AN SPOUSE MAKE BIG HIT: This float featuring Mickey and Minnie Mouse made an especially big hit with the small fry. The mouse figures were mounted on turntables for animation.