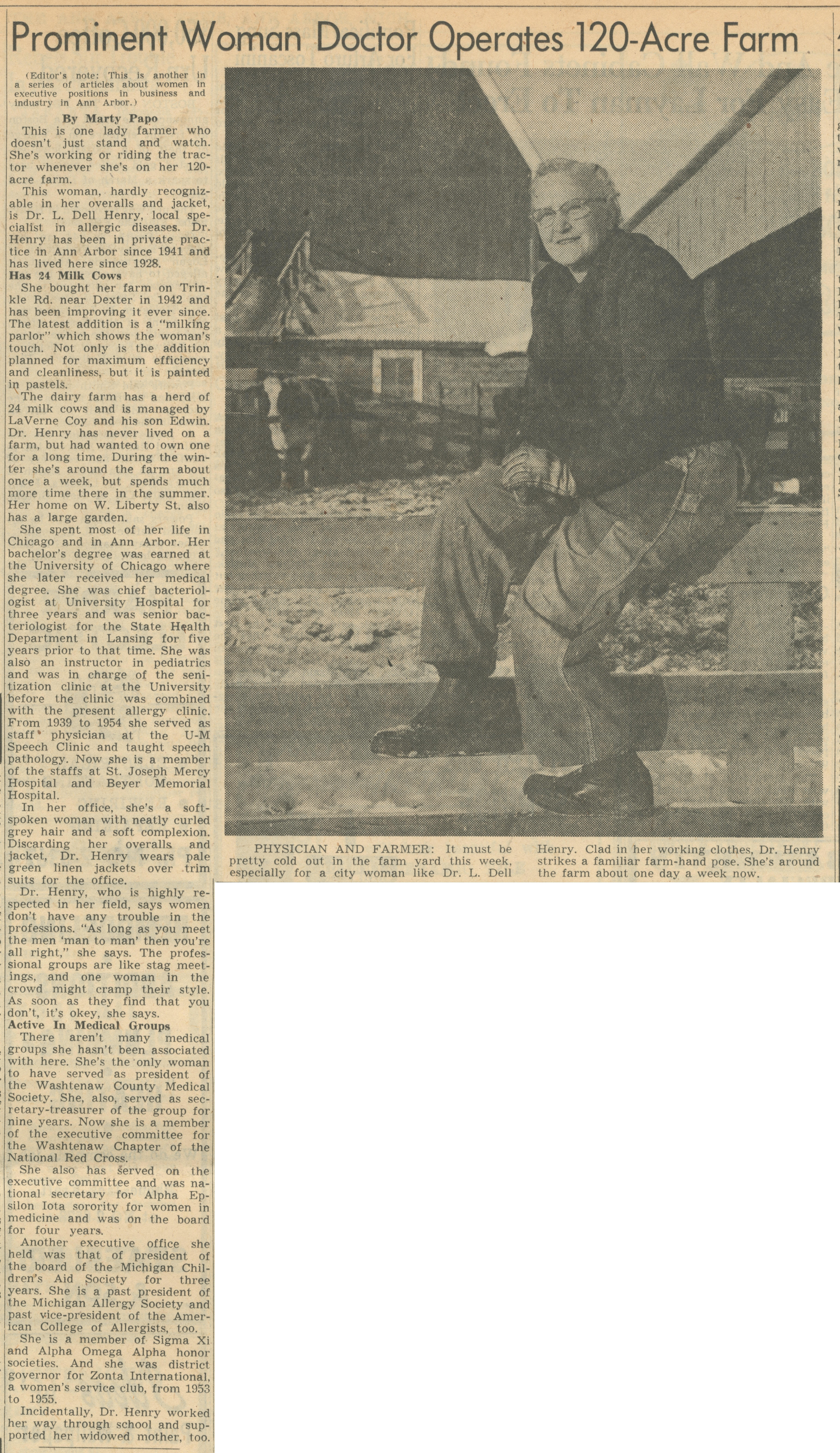 Prominent Woman Doctor Operated 120-Acre Farm
(Editor’s note: This is another in a series of articles about women in executive positions in business and industry in Ann Arbor.)
By Marty Papo

This is one lady farmer who doesn’t just stand and watch. She’s working or riding the tractor whenever she’s on her 120-acre farm.
This woman, hardly recognizable in her overalls and jacket, is Dr. L. Dell Henry, local specialist in allergic diseases. Dr. Henry has been in private practice in Ann Arbor since 1941 and has lived here since 1928.

Has 24 Milk Cows
She bought her farm on Trinkle Rd. near Dexter in 1942 and has been improving it ever since. The latest addition is a “milking parlor” which shows the woman’s touch. Not only is the addition planned for maximum efficiency and cleanliness, but it is painted in pastels.
The dairy farm has a herd of 24 milk cows and is managed by LaVerne Coy and his son Edwin. Dr. Henry has never lived on a farm, but had wanted to own one for a long time. During the winter she’s around the farm about once a week, but spends much more time there in the summer. Her home on W. Liberty St. also has a large garden.
She spent most of her life in Chicago and in Ann Arbor. Her bachelor’s degree was earned at the University of Chicago where she later received her medical degree. She was chief bacteriologist at University Hospital for three years and was senior bacteriologist for the State Health Department in Lansing for five years prior to that time. She was also an instructor in pediatrics and was in charge of the sanitization clinic at the University before the clinic was combined with the present allergy clinic. From 1939 to 1954 she served as staff physician at the U-M Speech Clinic and taught speech pathology. Now she is a member of the staffs at St. Joseph Mercy Hospital.
In her office, she’s a soft-spoken woman with neatly curled grey hair and a soft complexion. Discarding her overalls and jacket, Dr. Henry wears pale green linen jackets over trim suits for the office.
Dr. Henry, who is highly respected in her field, says women don’t have any trouble in the professions. “As long as you meet the men ‘man to man’ then you’re all right,” she says. The professional groups are like stag meetings, and one woman in the crowd might cramp their style. As soon as they find that you don’t it’s “okay”, she says.

Active In Medical Groups
There aren’t many medical groups she hasn’t been associated with here. She’s the only woman to have served as president of the Washtenaw County Medical Society. She, also, served as secretary-treasurer of the group for nine years. Now she is a member of the executive committee for the Washtenaw Chapter of the National Red Cross.
She also has served on the executive committee and was national secretary for Alpha Epsilon Iota sorority for women in medicine and was on the board for four years.
Another executive office she held was that of president of the board of the Michigan Children’s Aid Society for three years. She is a past president of the Michigan Allergy Society and past vice-president of the American College of Allergists, too.
She is a member of Sigma Xi and Alpha Omega Alpha honor societies. And she was district governor for Zonta International, a women’s service club, from 1953 to 1955.
Incidentally, Dr. Henry worked her way through school and supported her widowed mother, too.

(caption for photo) PHYSICIAN AND FARMER: It must be pretty cold out in the “farmyard” this week, especially for a city woman like Dr. L. Dell Henry. Clad in her working clothes, Dr. Henry strikes a familiar farm-hand pose. She’s around the farm about one day a week now.