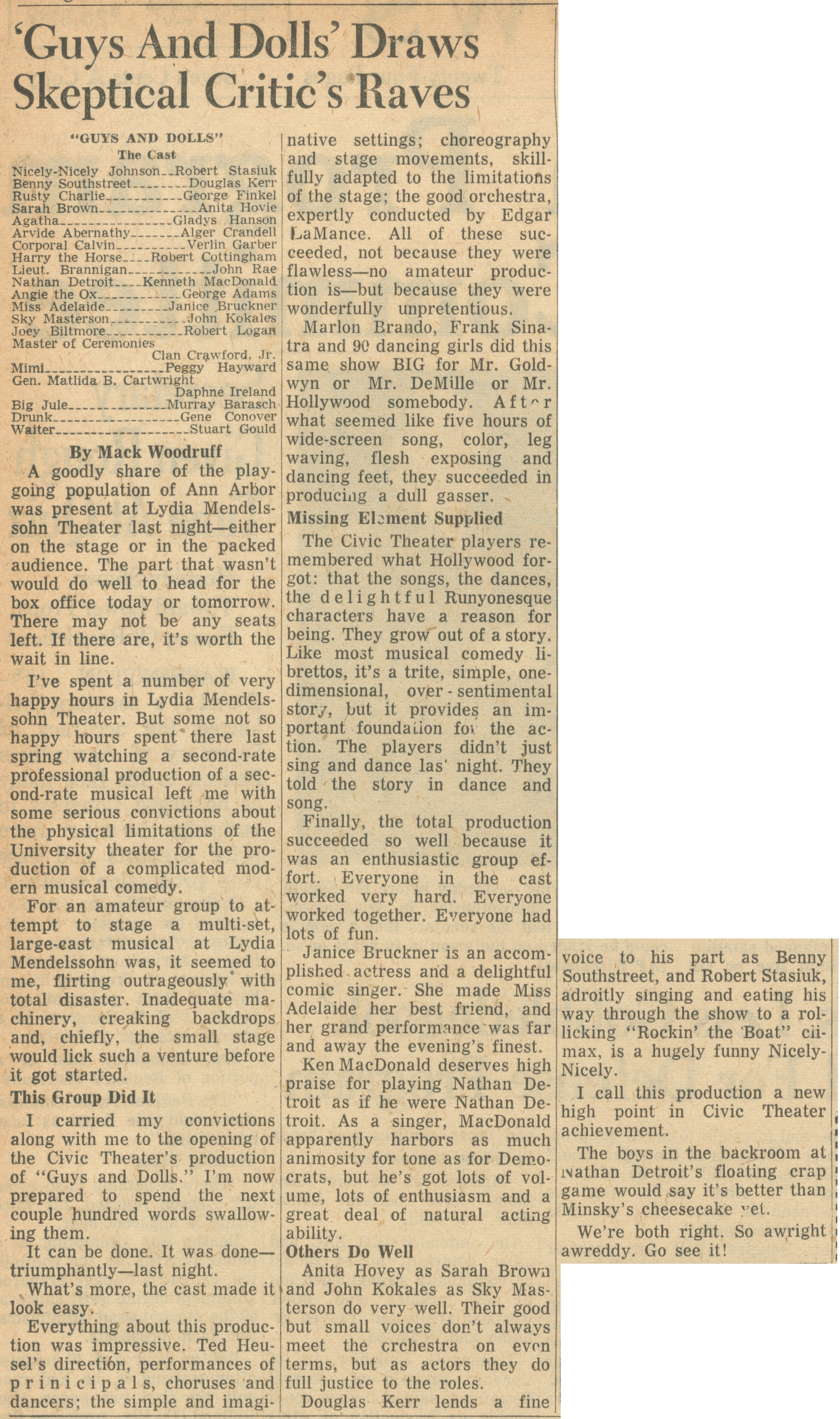 By Mack Woodruff
A goodly share of the playgoing population of Ann Arbor was present at Lydia Mendelssohn Theater last night—either on the stage or in the packed audience. The part that wasn’t would do well to head for the box office today or tomorrow. There may not be any seats left. If there are, it’s worth the wait in line.

For an amateur group to attempt to stage a multi-set, large-cast musical at Lydia Mendelssohn was, it seemed to me, flirting outrageously with total disaster. Inadequate machinery, creaking backdrops and, chiefly, the small stage would lick such a venture before it got started.

This Group Did It
I carried my convictions along with me to the opening of the Civic Theater's production' of “Guys and Dolls.” I’m now prepared to spend the next couple hundred words swallowing them.

It can be done. It was done—triumphantly—last night.

What’s more, the cast made it look easy.

Everything about this production was impressive. Ted Heusel’s direction, performances of principals, choruses and dancers; the simple and imaginative settings; choreography and stage movements, skillfully adapted to the limitations of the stage; the good orchestra, expertly conducted by Edgar LaMance. All of these succeeded, not because they were flawless—no amateur production is—but because they were wonderfully unpretentious.

Marlon Brando, Frank Sinatra and 90 dancing girls did this same show BIG for Mr. Goldwyn or Mr. DeMille or Mr. Hollywood somebody. After what seemed like five hours of wide-screen song, color, leg waving, flesh exposing and dancing feet, they succeeded in producing a dull gasser.

Missing Element Supplied
The Civic Theater players remembered what Hollywood forgot: that the songs, the dances, the delightful Runyonesque characters have a reason for being. They grow out of a story. Like most musical comedy librettos, it’s a trite, simple, one-dimensional, over-sentimental story, but it provides an important foundation for the action. The players didn't just sing and dance last night. They told the story in dance and song.

Finally, the total production succeeded so well because it was an enthusiastic group effort. Everyone in the cast worked very hard. Everyone worked together. Everyone had lots of fun.

Janice Bruckner is an accomplished actress and a delightful comic singer. She made Miss Adelaide her best friend, and her grand performance was far and away the evening’s finest.

Ken MacDonald deserves high praise for playing Nathan Detroit as if he were Nathan Detroit. As a singer, MacDonald apparently harbors as much animosity for tone as for Democrats, but he’s got lots of volume, lots of enthusiasm and a great deal of natural acting ability.

Others Do Well
Anita Hovey as Sarah Brown and John Kokales as Sky Masterson do very well. Their good but small voices don’t always meet the orchestra on even terms, but as actors they do full justice to the roles.

Douglas Kerr lends a fine voice to his part as Benny Southstreet, and Robert Stasiuk, adroitly singing and eating his way through the show to a rollicking “Rockin’ the Boat” climax, is a hugely funny Nicely-Nicely.

I call this production a new high point in Civic Theater achievement.

The boys in the backroom at Nathan Detroit’s floating crap game would say it's better than Minsky’s cheesecake yet.

We’re both right. So awright awreddy. Go see it! |