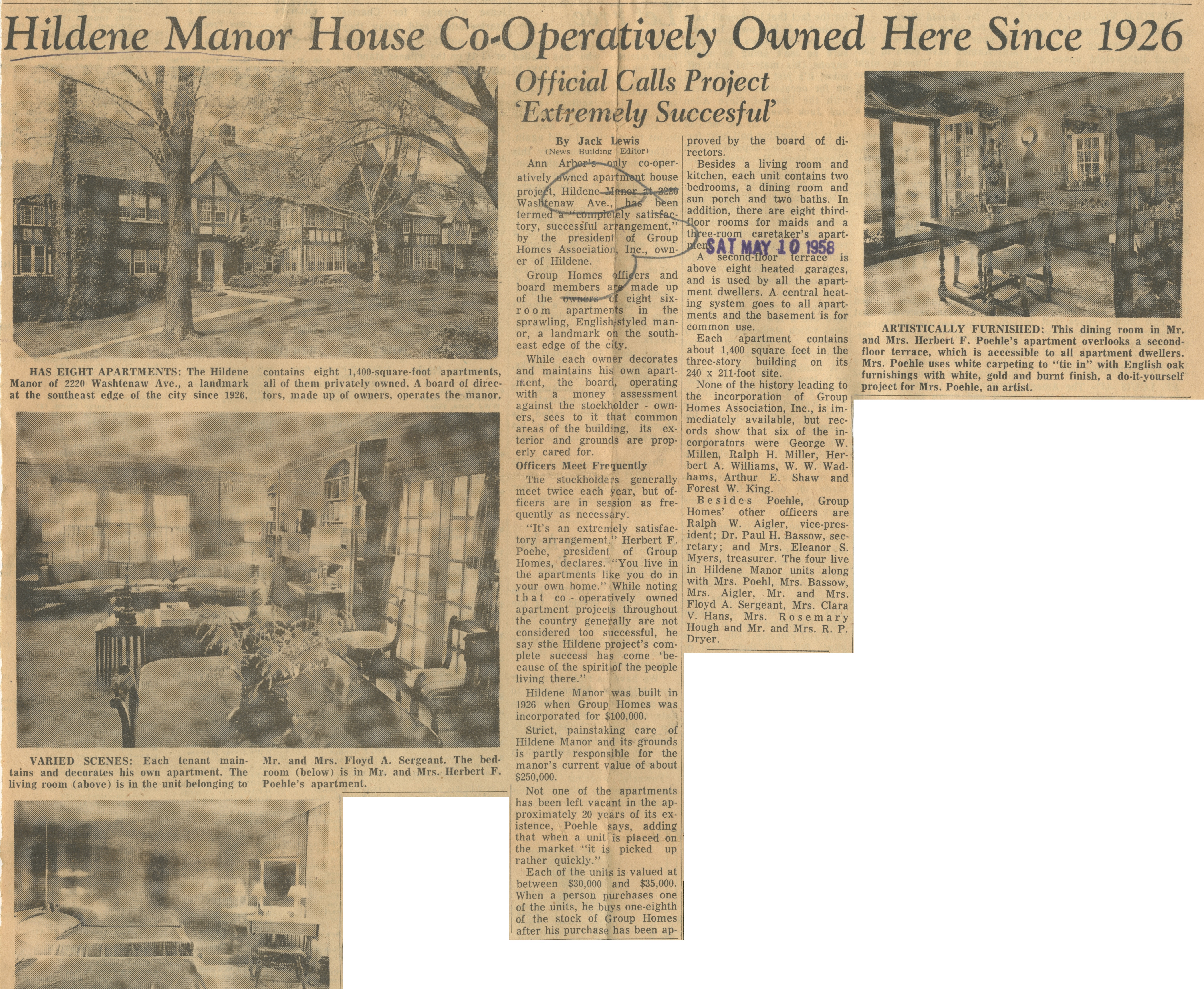 Group Homes officers and board members are made up of the owners of eight six-room apartments in the sprawling English-style manor, a landmark on the southeast edge of the city.

While each owner decorates and maintains his own apartment, the board, operating with a money assessment against the stockholder - owners, sees to it that common areas of the building, its exterior and grounds are properly cared for.

The stockholders generally meet twice each year, but officers are in session as frequently as necessary.

“It’s an extremely satisfactory arrangement.” Herbert F. Poehe, president of Group Homes, declares. “You live in the apartments like you do in your own home.” While noting that co - operatively owned apartment projects throughout the country generally are not considered too successful, he says the Hildene project’s complete success has come ‘because of the spirit (of the people living there.”

Strict, painstaking care of Hildene Manor and its grounds is partly responsible for the manor’s current value of about $250,000.

Not one of the apartments has been left vacant in the approximately 20 years of its existence, Poehle says, adding that when a unit is placed on the market “it is picked up rather quickly."

Each of the units is valued at between $30,000 and $35,000. When a person purchases one of the units, he buys one-eighth of the stock of Group Homes after his purchase has been approved by the board of directors.

Besides a living room and kitchen, each unit contains two bedrooms, a dining room and sun porch and two baths. In addition, there are eight third-floor rooms for maids and a three-room caretaker’s apartment.

A second-floor terrace is above eight heated garages, and is used by all the apartment dwellers. A central heating system goes to all apartments and the basement is for common use.

Each apartment contains about 1,400 square feet in the three-story building on its 240 x 211-foot site.

None of the history leading to the incorporation of Group Homes Association, Inc., is immediately available, but records show that six of the incorporators were George W. Millen, Ralph H. Miller, Herbert A. Williams, W. W. Wadhams, Arthur E. Shaw and Forest W. King.

HAS EIGHT APARTMENTS: The Hildene contains eight 1,400 square foot apartments. Manor of 2220 Washtenaw Ave., a landmark all of them privately owned. A board of direcat the southeast edge of the city since 1926. tors, made up of owners, operates the manor.

VARIED SCENES: Each tenant main- Mr. and Mrs. Floyd A. Sergeant. The bed-tains and decorates his own apartment. The room (below) is in Mr. and Mrs. Herbert F. living room (above) is in the unit belonging to Poehle’s apartment.

ARTISTICALLY FURNISHED: This dining room in Mr. and Mrs. Herbert F. Poehle’s apartment overlooks a second-floor terrace, which is accessible to all apartment dwellers. Mrs. Poehle uses white carpeting to “tie in” with English oak furnishings with white, gold and burnt finish, a do-it-yourself project for Mrs. Poehle, an artist.