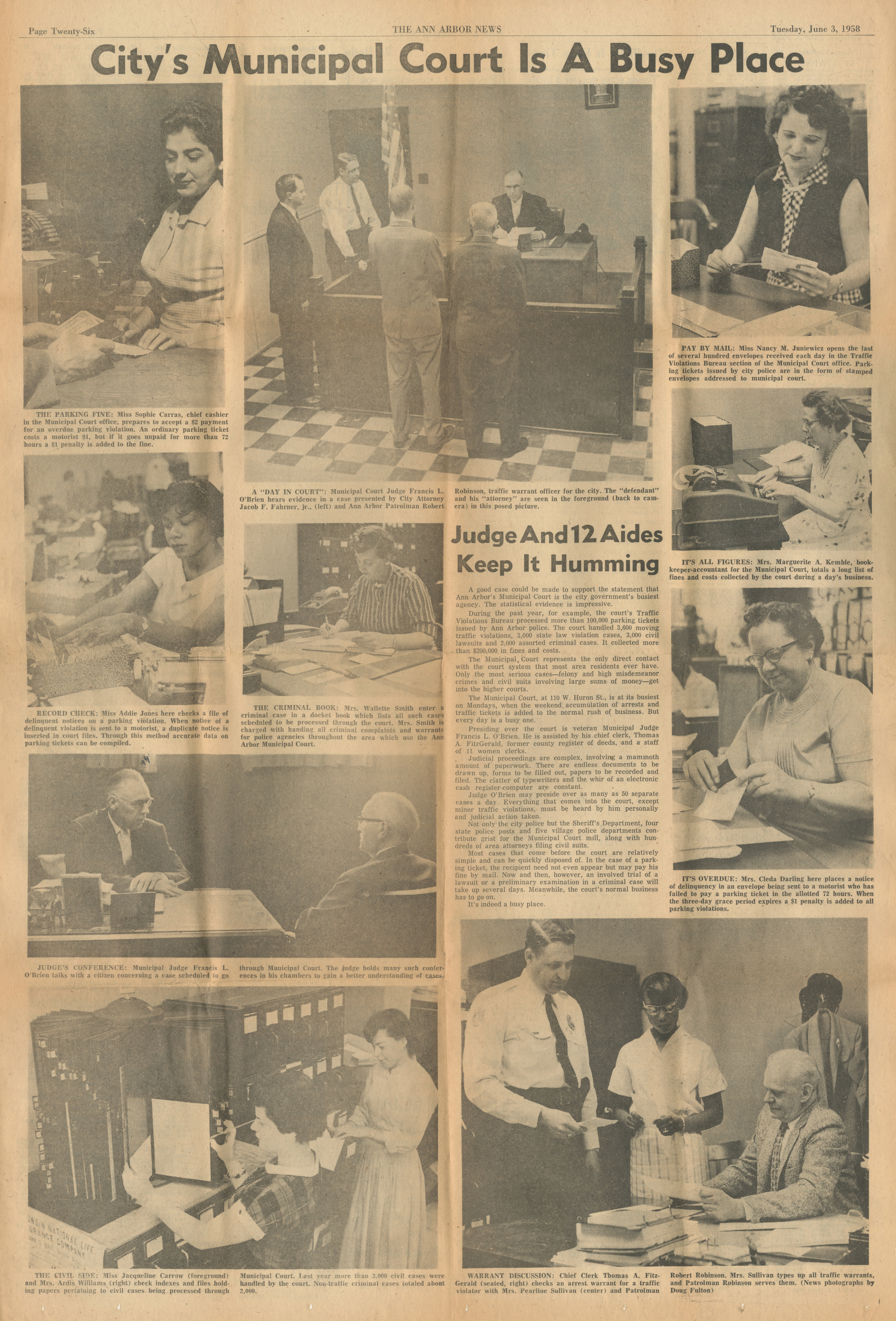 Judge And 12 Aides Keep It Humming

A goof case could be made to support the statement that Ann Arbor's Municipal Court is the city government's busiest agency. The statistical evidence is impressive.

The Municipal Court represents the only direct contact with the court system that most area residents ever have. Only the most serious cases - felony and high misdemeanor crimes and civil suits involving large sums of money - get into the higher courts.

The Municipal Court, at 110 W. Huron St., is at its busiest on Mondays, when the weekend accumulation of arrests and traffic tickets is added to the normal rush of business. But every day is a busy one.

Presiding over the court is veteran Municipal Judge Francis L. O'Brien. He is assisted by his chief clerk, Thomas A. FitzGerald, former county register of deeds, and a staff of 11 women clerks.

Judicial proceedings are complex, involving a mammoth amount of paperwork. There are endless documents to be drawn up, forms to be filled out, papers to be recorded and filed. The clatter of typewriters and the whir of an electronic cash register-computer are constant.

Judge O'Brien may preside over as many as 50 separate cases a day. Everything that comes into the court, except minor traffic violations, must be heard by him personally and judicial action taken.

Not only the city police but the Sheriff's Department, four state police posts and five village police departments contribute gist for the Municipal Court mill, along with hundreds of area attorneys filing civil lawsuits.

Most cases that come before the court are relatively simple and can be quickly disposed of. In the case of a parking ticket, the recipient need not even appear but may pay his fine by mail. Now and then, however, an involved trial of a lawsuit of a preliminary examination in a criminal case will take up several days. Meanwhile, the court's normal business has to go on.

It's indeed a busy place.

THE PARKING FINE: Miss Sophie Carras, chief cashier in the Municipal Court office, prepares to accept a $2 payment for an overdue parking violation. An ordinary parking ticket costs a motorist $1, but if it goes unpaid for more than 72 hours a $1 penalty is added to the fine.

RECORD CHECK: Miss Addie Jones here checks a file of delinquent notices on a parking violation. When notice of a delinquent violation is sent to a motorist, a duplicate notice inserted in court files. Through this method accurate data parking tickets can be compiled.

THE CRIMINAL BOOK: Mrs. Wallette Smith enter a criminal case in a docket book which lists all such cases scheduled to be processed through the court. Mrs. Smith is charged with handing all criminal complaints and warrants for police agencies throughout the area which use the Ann Arbor Municipal Court.

JUDGE'S CONFERENCE: Municipal Judge Francis L. O'Brien talks with a citizen concerning a case scheduled to go through Municipal Court. The judge holds many such conferences in his chambers to gain a better understanding of cases.

IT'S OVERDUE: Mrs. Cleda Darling here places a notice of delinquency in an envelope being sent to a motorist who has failed to pay a parking ticket in the allotted 72 hours. When the three-day grace period expires a $1 penalty is added to all parking violations.

IT'S ALL FIGURES: Mrs. Marguerite A. Kemble, book-keeper-accountant for the Municipal Court, totals a long list of fines and costs collected by the court during a day's business.

PAY BY MAIL: Miss Nancy M. Juniewicz opens the last of several hundred envelopes received each day in the Traffic Violations Bureau section of the Municipal Court office. Parking tickets issued by city police are in the form of stamped envelopes addressed to municipal court.

A "DAY IN COURT": Municipal Court Judge Francis L. O'Brien hears evidence in a case presented by City Attorney Jacob F. Fahrner, jr., (left) and Ann Arbor Patrolman Robert Robinson, traffic warrant officer for the city. The "defendant" and his "attorney: are seen in the foreground (back to camera) in this posed picture.