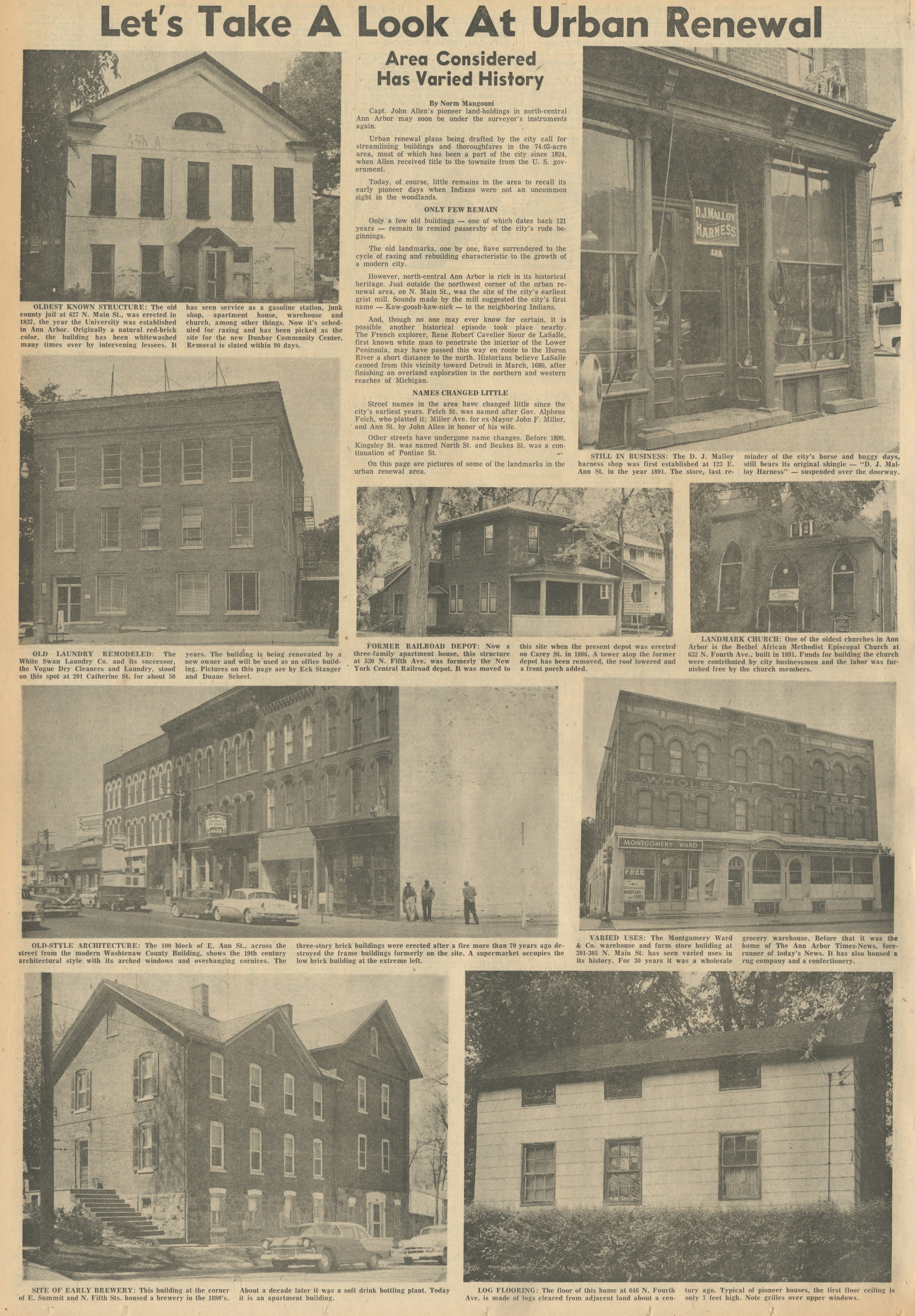 Capt. John Allen's pioneer land-holdings in north-central Ann Arbor may soon be under the surveyor's instruments again. Urban renewal plans being drafted by the city call for streamlining buildings and thoroughfares in the 74.03-acre area, most of which has been a part of the city since 1824, when Allen received title to the townsite from the U.S. government. Today, of course, little remains in the area to recall its early pioneer days when Indains were not an uncommon sight in the woodlands. ONLY A FEW REMAIN Only a few old buildings - one of which dates back 121 years - remain to remind passersby of the city's rude beginnings. The old landmarks, one by one, have surrendered to the cycle of razing and rebuilding characteristic to the growth of a modern city. However north-central Ann Arbor is rich in its historical heritage. Just outside the northwest corner of the urban renewal area, on N. Main St., was the site of the city's earliest grist mill. Sounds made by the mill suggested the city's first name - Kaw-goosh-kaw-nick - to the neighboring Indians. And, though no one may ever know for certain, it is possible another historical episode took place nearby. The French explorer, Rene Robert Cavelier Sieur de LaSalle, first known white man to penetrate the interior of the Lower Peninsula, may have passed this way en route to the Huron River a short distance to the north. historians believe LaSalle canoed from this vicinity toward Detroit in March, 1680, after finishing an overland exploration in the northern and western reaches of Michigan. NAMES CHANGED LITTLE Street names in the area have changed little since the city's earliest years. Felch St. was named after Gov. Alpheus Felch, who platted it; Miller Ave. for ex-Mayor John F. Miller, and Ann St. by John Allen in honor of his wife. Other streets have undergone name changes. Before 1890, Kingsley St. was named North St. and Beakes St. was a continuation of Pontiac St. On this page are pictures of some of the landmarks in the urban renewal area. Photo captions: OLDEST KNOWN STRUCTURE: The old county jail at 627 N. Main St., was erected in 1837, the year the University was established in Ann Arbor. Originally a natural red-brick color, the building has been whitewashed many times over by intervening lessees. It has seen service as a gasoline station, junk shop, apartment house, warehouse and church, among other things. Now it's scheduled for razing and has been picked as the site for the new Dunbar Community Center. Removal is slated within 90 days. OLD LAUNDRY REMODELED: The White Swan Laundry Co. and its successor, the Vogue Dry Cleaners and Laundry, stood on this spot at 201 Catherine St. for about 50 years. The building is being renovated by a new owner and will be used as an office building. Pictures on this page are by Eck Stanger and Duane Scheel. OLD-STYLE ARCHITECTURE: The 100 block of E. Ann At., across the street from the modern Washtenaw County Building, shows the 19th century architectural style with its arched windows and overhanging cornices. The three-story brick buildings were erected after a fire more than 70 years ago destroyed the frame buldings formerly on the site. A supermarket occupies the low brick building at the extreme left. SITE OF EARLY BREWERY: This building at the corner of E. Summit and N. Fifth Sts. housed a brewery in the 1880's. About a decade later is was a soft drink bottling plant. Today it is an apartment building. LOG FLOORING: The floor of this home at 646 N. Fourth Ave. is made of logs cleared form adjacent land about a century ago. Typical of pioneer houses, the first floor ceiling is only 7 feet high. Note grilles over upper windows. VARIED USES: The Montgomery Ward & Co. warehouse and farm store building at 301-305 N. Main St. has seen varied uses in its history. For 30 years it was a wholesale grocery warehouse. Before that it was the home of The Ann Arbor Times-News, forerunner of today's News. It has also housed a rug company and a confectionery. FORMER RAILROAD DEPOT: Now a three-family apartment house, this structure at 530 N. Fifth Ave. was formerly the New York Central Railroad depot. It was moved to this site when the present depot was erected on Carey St. in 1886. A tower atop the former depot has been removed, the roof lowered and a front porch added. LANDMARK CHURCH: One of the oldest churches in Ann Arbor is the Bethel African Methodist Episcopal Church at 632 N. Fourth Ave., built in 1891. Funds for building the church were contributed by city businessmen and the labor was furnished free by the church members. STILL IN BUSINESS: The D. J. Malloy harness shop was first established at 123 E. Ann St. in the year 1891. The store, last reminder of the city's horse and buggy days, still bears its original shingle - "D. J. Malloy Harness" - suspended over the doorway.