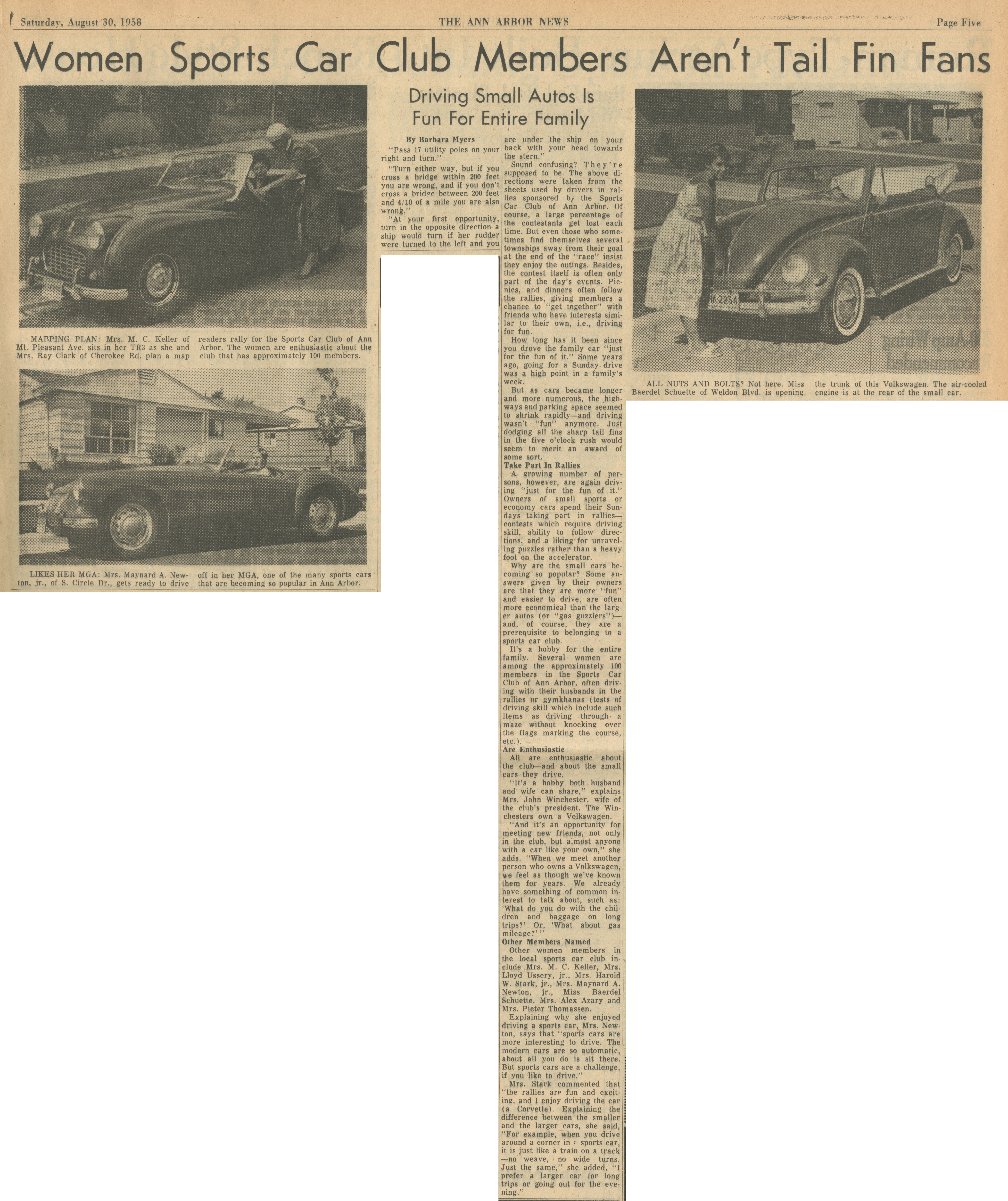 Driving Small Autos Is Fun For Entire Family
"Pass 17 utility poles on your right and turn."
"Turn either way, but if you cross a bridge within 200 feet you are wrong, and if you don't cross a bridge between 200 feet and 4/10 of a mile you are also wrong."
"At your first opportunity, turn in the opposite direction a ship would turn if her rudder were turned to the left and you are under the ship on your back with your head towards the stern."
Sound confusing? They're supposed to be. The above directions were taken from the sheets used by drivers in rallies sponsored by the Sports Car Club of Ann Arbor. Of course, a large percentage of the contestants get lost each time. But even those who sometimes find themselves several townships away from their goal at the end of the "race" insist they enjoy the outings. Besides, the contest itself is often only part of the day's events. Picnics, and dinners often follow the rallies, giving members a chance to "get together" with friends who have interests similar to their own, i.e., driving for fun.
How long has it been since you drove the family car "just for the fun of it." Some years ago, going for a Sunday drive was a high point in a family's week.
But as cars became longer and more numerous, the highways and parking space seemed to shrink rapidly - and driving wasn't "fun" anymore. Just dodging all the sharp tail fins in the five o'clock rush would seem to merit an award of some sort.
Take Part In Rallies
A growing number of persons, however, are again driving "just for the fun of it." Owners of small sports or economy cars spend their Sundays taking part in rallies - contests which require driving skill, ability to follow directions, and a liking for unraveling puzzles rather than a heavy foot on the accelerator.
Why are the small cars becoming so popular? Some answers given by their owners are that they are more "fun" and easier to drive, are often more economical than the larger autos (or "gas guzzlers") - and, of course, they are a prerequisite to belonging to a sports car club.
It's a hobby for the entire family. Several women are among the approximately 100 members in the Sports Car Club of Ann Arbor, often driving with their husbands in the rallies or gymkhanas (tests of driving skill which include such items as driving through a maze without knocking over the flags marking the course, etc.).
Are Enthusiastic
All are enthusiastic about the club - and about the small cars they drive.
"It's a hobby both husband and wife can share," explains Mrs. John Winchester, wife of the club's president. The Winchesters own a Volkswagen.
"And it's an opportunity for meeting new friends, not only in the club, but almost anyone with a car like your own," she adds. "When we meet another person who owns a Volkswagen, we feel as though we've known them for years. We already have something of common interest to talk about, such as: 'What do you do with the children and baggage on long trips?' Or, 'What about gas mileage?' "
Other Members Named
Other women members in the local sports car club include Mrs. M. C. Keller, Mrs. Lloyd Ussery, jr., Mrs. Harold W. Stark, jr., Mrs. Maynard A. Newton, jr., Miss Baerdel Schuette, Mrs. Alex Azary and Mrs. Pieter Thomassen.
Explaining why she enjoyed driving a sports car, Mrs. Newton, says that "sports cars are more interesting to drive. The modern cars are so automatic, about all you do is sit there. But sports cars are a challenge, if you like to drive."
Mrs. Stark commented that "the rallies are fun and exciting, and I enjoy driving the car (a Corvette). Explaining the difference between the smaller and larger cars, she said, "For example, when you drive around a corner in a sports car, it is just like a train on a track - no weave, no wide turns. Just the same," she added. "I prefer a larger car for long trips or going out for the evening."