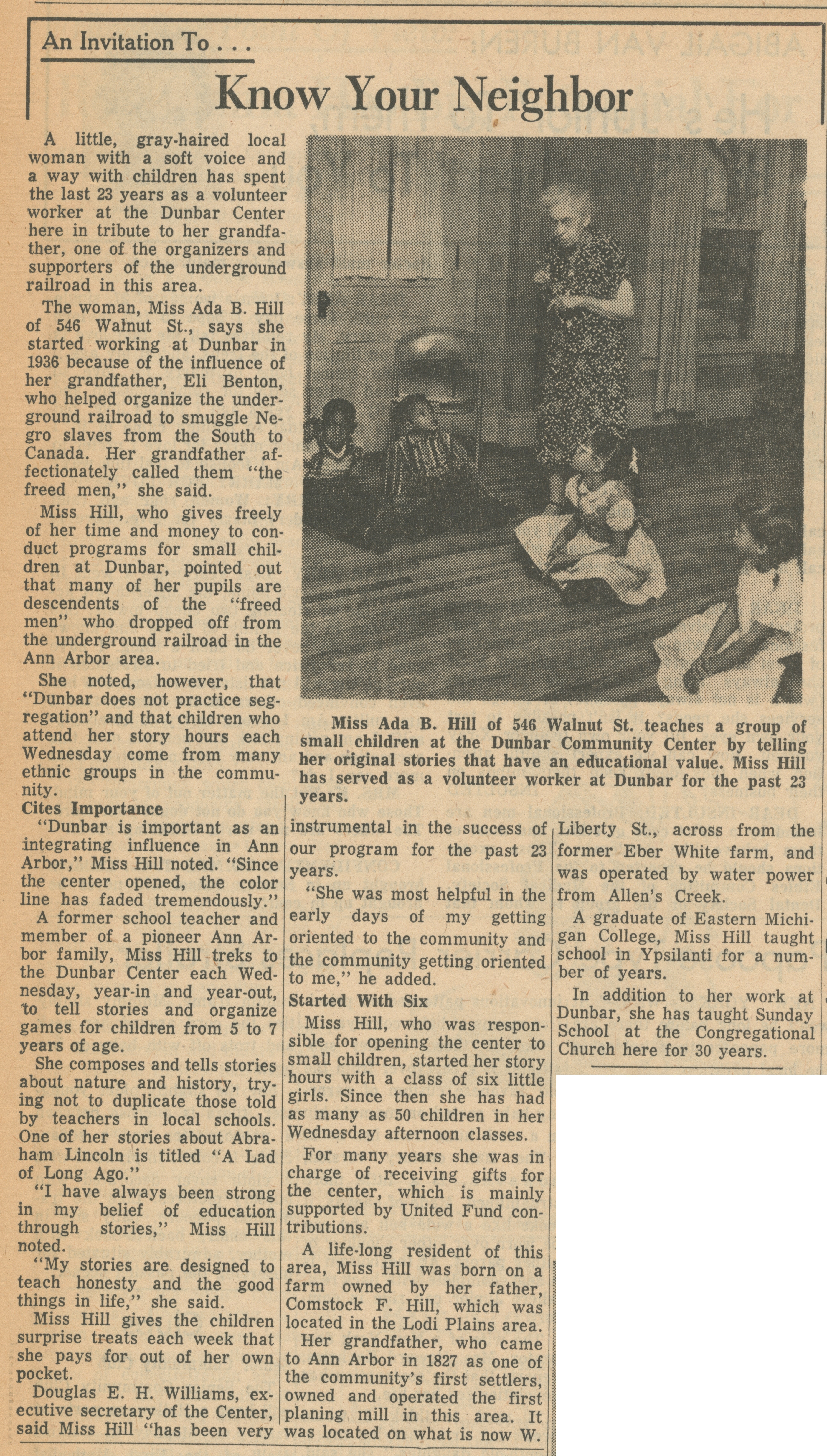 AN INVITATION TO… KNOW YOUR NEIGHBOR A little gray-haired local woman with a soft voice and a way with children has spent the last 23 years as a volunteer worker at the Dunbar Center here in tribute to her grandfather, one of the organizers and supporters of the underground railroad in this area. The woman, Miss Ada B. Hill of 546 Walnut St., says she started working at Dunbar in 1936 because of the influence of her grandfather, Eli Benton, who helped organize the underground railroad to smuggle Negro slaves from the South to Canada. Her grandfather affectionately called them “the freed men,” she said. Miss Hill, who gives freely of her time and money to conduct programs for small children at Dunbar, pointed out that many of her pupils are descendants of the “freed men” who dropped off from the underground railroad in the Ann Arbor area. She noted, however, that “Dunbar does not practice segregation” and that children who attend her story hours each Wednesday come from many ethnic groups in the community. Cites Importance “Dunbar is important as an integrating influence in Ann Arbor,” Miss Hill noted. “Since the center opened, the color line has faded tremendously.” A former school teacher and member of a pioneer Ann Arbor family, Miss Hill treks to the Dunbar Center each Wednesday, year-in and year-out, to tell stories and organize games for children from 5 to 7 years of age. She composes and tells stories about nature and history, trying not to duplicate those told by teachers in local schools. One of her stories about Abraham Lincoln is titled “A Lad of Long Ago.” “I have always been strong in my belief of education through stories,” Miss Hill noted. “My stories are designed to teach honesty and the good things in life,” she said. Miss Hill gives the children surprise treats each week that she pays for out of her own pocket. Douglas E. H. Williams, executive secretary of the Center, said Miss Hill “has been very instrumental in the success of our program for the past 23 years. “She was most helpful in the early days of my getting oriented to the community and the community getting oriented to me,” he added. Started With Six Miss Hill, who was responsible for opening the center to small children, started her story hours with a class of six little girls. Since then she has had as many as 50 children in her Wednesday afternoon classes. For many years she was in charge of receiving gifts for the center, which is mainly supported by United Fund contributions. A life-long resident of this area, Miss Hill was born on a farm owned by her father, Comstock F. Hill, which was located in the Lodi Plains area. Her grandfather, who came to Ann Arbor in 1827 as one of the community’s first settlers, owned and operated the first planing mill in this area. It was located on what is now W. Liberty St., across from the former Eber White farm, and was operated by water power from Allen’s Creek. A graduate of Eastern Michigan College, Miss Hill taught school in Ypsilanti for a number of years. In addition to her work at Dunbar, she has taught Sunday School at the Congregational Church here for 30 years. IMAGE TEXT: Miss Ada B. Hill of 546 Walnut St. teaches a group of small children at the Dunbar Community Center by telling her original stories that have an educational value. Miss Hill has served as a volunteer worker at Dunbar for the past 23 years.