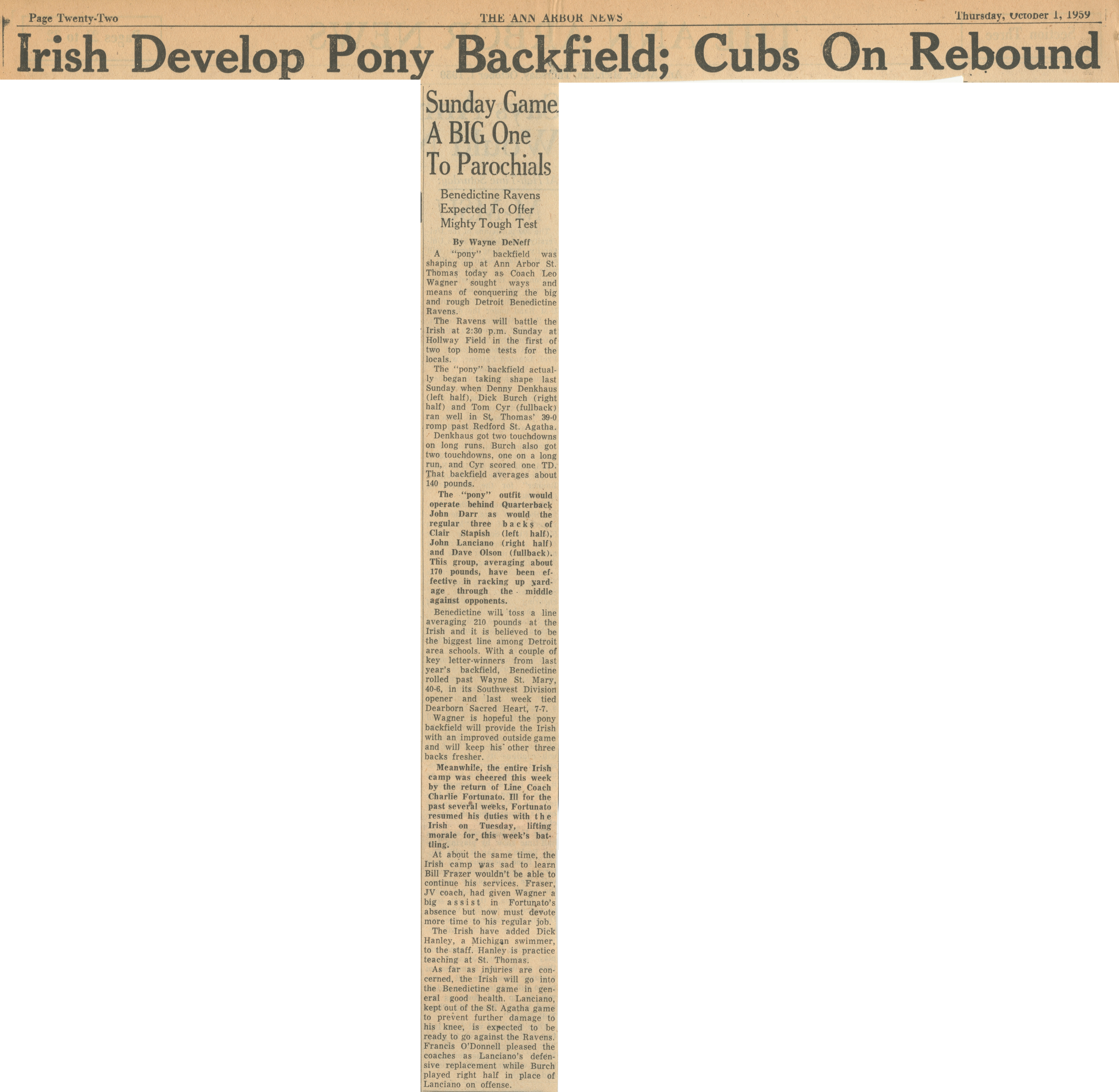 Sunday Game A BIG One To Parochials

A “pony” backfield was shaping up at Ann Arbor St. Thomas today as Coach Leo Wagner sought ways and means of conquering the big and rough Detroit Benedictine Ravens.

The Ravens will battle the Irish at 2:30 p.m. Sunday at Hollway Field in the first of two top home tests for the locals.

The "pony" outfit would operate behind Quarterback John Darr as would the regular three backs of Clair Stapish (left half), John Lanciano (right half) and Dave Olson (fullback). This group, averaging about 170 pounds, have been effective in racking up yardage through the middle against opponents.

Benedictine will toss a line averaging 210 pounds at the Irish and it is believed to be the biggest line among Detroit area schools. With a couple of key letter-winners from last year’s backfield, Benedictine rolled past Wayne St. Mary, 40-6, in its Southwest Division opener and last week tied Dearborn Sacred Heart, 7-7.

Wagner is hopeful the pony backfield will provide the Irish with an improved outside game and will keep his other three backs fresher.

Meanwhile, the entire Irish camp was cheered this week by the return of Line Coach Charlie Fortunato. Ill for the past several weeks, Fortunato resumed his duties with the Irish on Tuesday, lifting morale for this week’s battling.

At about the same time, the Irish camp was sad to learn Bill Frazer wouldn’t be able to continue his services. Fraser, JV coach, had given Wagner a big assist in Fortunato’s absence but now must devote more time to his regular job.

The Irish have added Dick Hanley, a Michigan swimmer, to the staff. Hanley is practice teaching at St. Thomas.

As far as injuries are concerned, the Irish will go into the Benedictine game in general good health. Lanciano, kept out of the St. Agatha game to prevent further damage to his knee, is expected to be ready to go against the Ravens. Francis O’Donnell pleased the coaches as Lanciano’s defensive replacement while Burch played right half in place of Lanciano on offense.