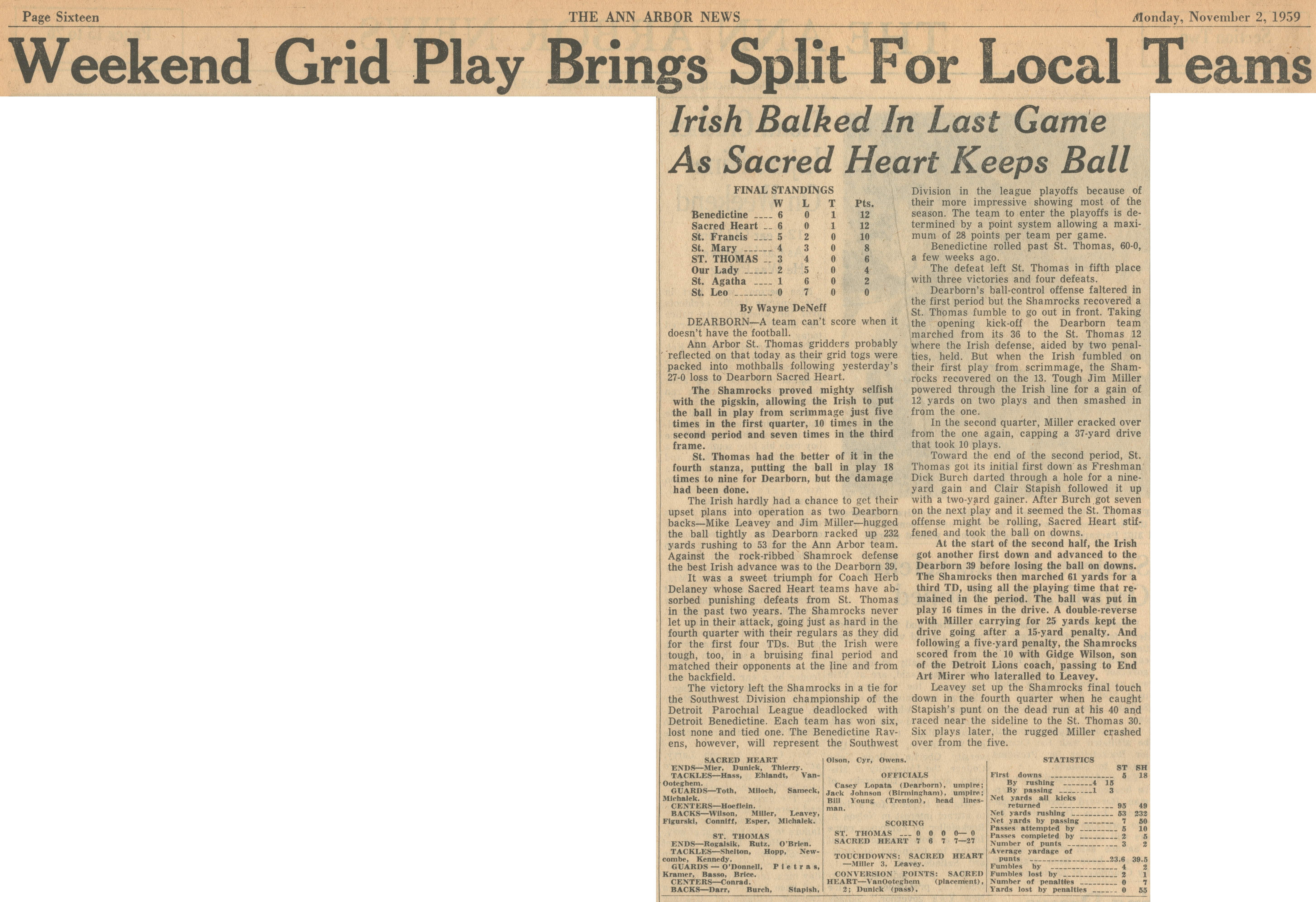 DEARBORN—A team can't score when it doesn’t have the football.

The Shamrocks proved mighty selfish with the pigskin, allowing the Irish to put the ball in play from scrimmage just five times in the first quarter, 10 times in the second period and seven times in the third frame.

St. Thomas had the better of it in the fourth stanza, putting the ball in play 18 times to nine for Dearborn, but the damage had been done.

The Irish hardly had a chance to get their upset plans into operation as two Dearborn backs—Mike Leavey and Jim Miller—hugged the ball tightly as Dearborn racked up 232 yards rushing to 53 for the Ann Arbor team. Against the rock-ribbed Shamrock defense the best Irish advance was to the Dearborn 39.

It was a sweet triumph for Coach Herb Delaney whose Sacred Heart teams have absorbed punishing defeats from St. Thomas in the past two years. The Shamrocks never let up in their attack, going just as hard in the fourth quarter with their regulars as they did for the first four TDs. But the Irish were tough, too, in a bruising final period and matched their opponents at the line and from the backfield.

The victory left the Shamrocks in a tie for the Southwest Division championship of the Detroit Parochial League deadlocked with Detroit Benedictine. Each team has won six, lost none and tied one. The Benedictine Ravens, however, will represent the Southwest Division in the league playoffs because of their more impressive showing most of the season. The team to enter the playoffs is determined by a point system allowing a maximum of 28 points per team per game.

Benedictine rolled past St. Thomas, 60-0, a few weeks ago.

Dearborn’s ball-control offense faltered in the first period but the Shamrocks recovered a St. Thomas fumble to go out in front. Taking the opening kick-off the Dearborn team marched from its 36 to the St. Thomas 12 where the Irish defense, aided by two penalties, held. But when the Irish fumbled on their first play from scrimmage, the Shamrocks recovered on the 13. Tough Jim Miller powered through the Irish line for a gain of 12 yards on two plays and then smashed in from the one.

In the second quarter, Miller cracked over from the one again, capping a 37-yard drive that took 10 plays.

Toward the end of the second period, St. Thomas got its initial first down as Freshman Dick Burch darted through a hole for a nine-yard gain and Clair Stapish followed it up with a two-yard gainer. After Burch got seven on the next play and it seemed the St. Thomas offense might be rolling, Sacred Heart stiffened and took the ball on downs.

At the start of the second half, the Irish got another first down and advanced to the Dearborn 39 before losing the ball on downs. The Shamrocks then marched 61 yards for a third TD, using all the playing time that remained in the period. The ball was put in play 16 times in the drive. A double-reverse with Miller carrying for 25 yards kept the drive going after a 15-yard penalty. And following a five-yard penalty, the Shamrocks scored from the 10 with Gidge Wilson, son of the Detroit Lions coach, passing to End Art Mirer who lateralled to Leavey.

Leavey set up the Shamrocks final touch down in the fourth quarter when he caught Stapish’s punt on the dead run at his 40 and raced near the sideline to the St. Thomas 30. Six plays later, the rugged Miller crashed over from the five.