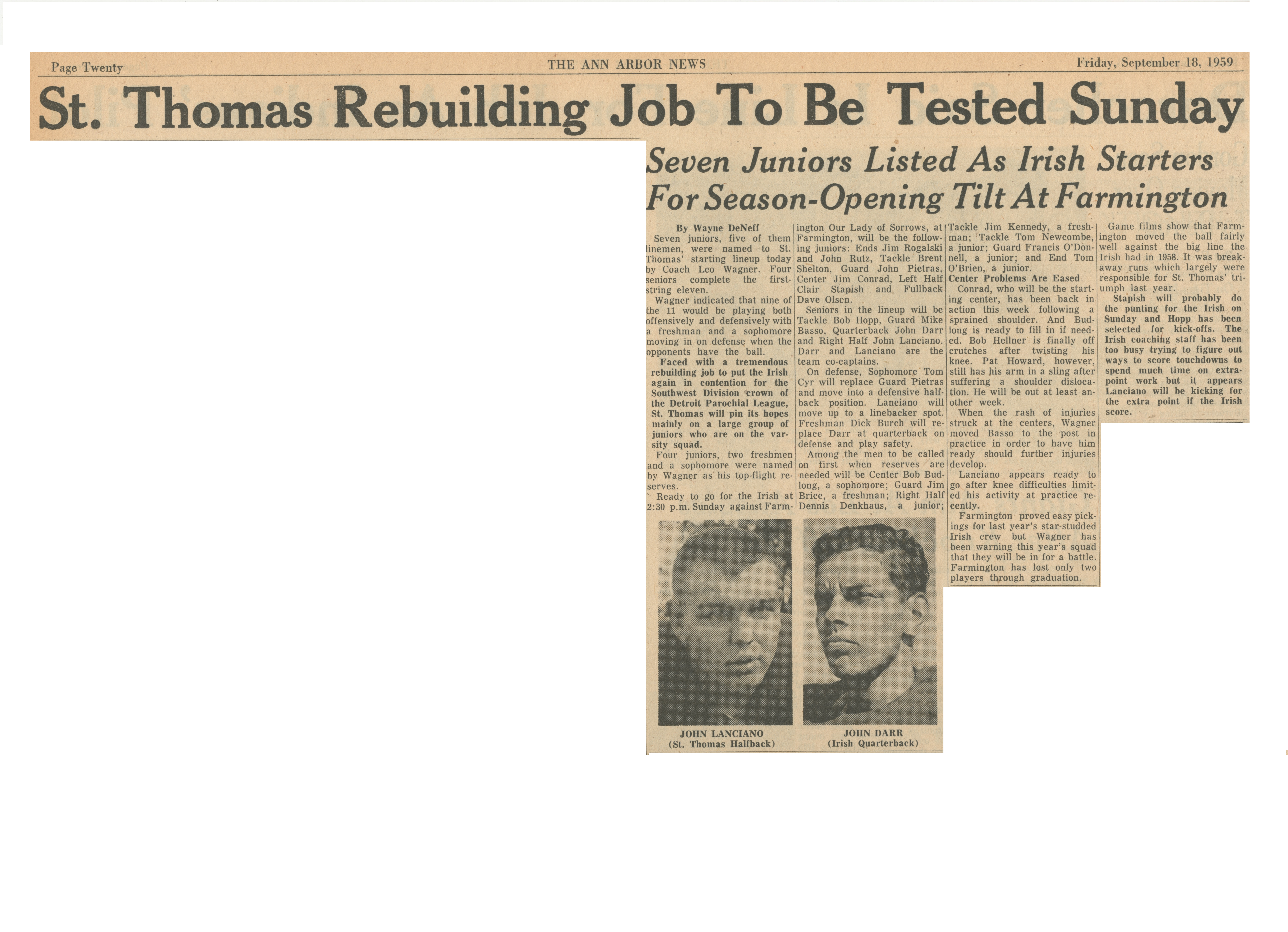 Wagner indicated that nine the 11 would be playing both offensively and defensively with a freshman and a sophomore moving in on defense when the opponents have the ball.

Faced with a tremendous rebuilding job to put the Irish again in contention for the Southwest Division crown of the Detroit Parochial League, St. Thomas will pin its hopes mainly on a large group of juniors who are on the varsity squad.

Four juniors, two freshmen and a sophomore were named by Wagner as his top-flight reserves.

Ready to go for the Irish at 2:30 p.m. Sunday against Farmington Our Lady of Sorrows, at Farmington, will be the following juniors: Ends Jim Rogalski and John Rutz, Tackle Brent Shelton, Guard John Pietras, Center Jim Conrad, Left Half Clair Stapish and Fullback Dave Olson.

Seniors in the lineup will be Tackle Bob Hopp, Guard Mike Basso, Quarterback John Darr and Right Half John Lanciano. Darr and Lanciano are the team co-captains.

On defense, Sophomore Tom Cyr will replace Guard Pietras and move into a defensive halfback position. Lanciano will move up to a linebacker spot. Freshman Dick Burch will replace Darr at quarterback on defense and play safety.

Among the men to be called on first when reserves needed will be Center Bob Budlong, a sophomore; Guard Jim Brice, a freshman; Right Half Dennis Denkhaus, a junior; Tackle Jim Kennedy, a freshman; Tackle Tom Newcombe, junior; Guard Francis O’Donell, a junior; and End Tom O’Brien, a junior.

Conrad, who will be the starting center, has been back in action this week following a sprained shoulder. And Budlong is ready to fill in if needed. Bob Hellner is finally off crutches after twisting his knee. Pat Howard, however, still has his arm in a sling after suffering a shoulder dislocation. He will be out at least another week.

When the rash of injuries struck at the centers, Wagner moved Basso to the post in practice in order to have him ready should further injuries develop.

Farmington proved easy pickings for last year’s star-studded Irish crew but Wagner has been warning this year’s squad that they will be in for a battle. Farmington has lost only two players through graduation.

Game films show that Farmington moved the ball fairly well against the big line the Irish had in 1958. It was breakaway runs which largely were responsible for St. Thomas’ triumph last year.

Stapish will probably do the punting for the Irish on Sunday and Hopp has been selected for kick-offs. The Irish coaching staff has been too busy trying to figure out ways to score touchdowns to spend much time on extra-point work but it appears Lanciano will be kicking for the extra point if the Irish score.