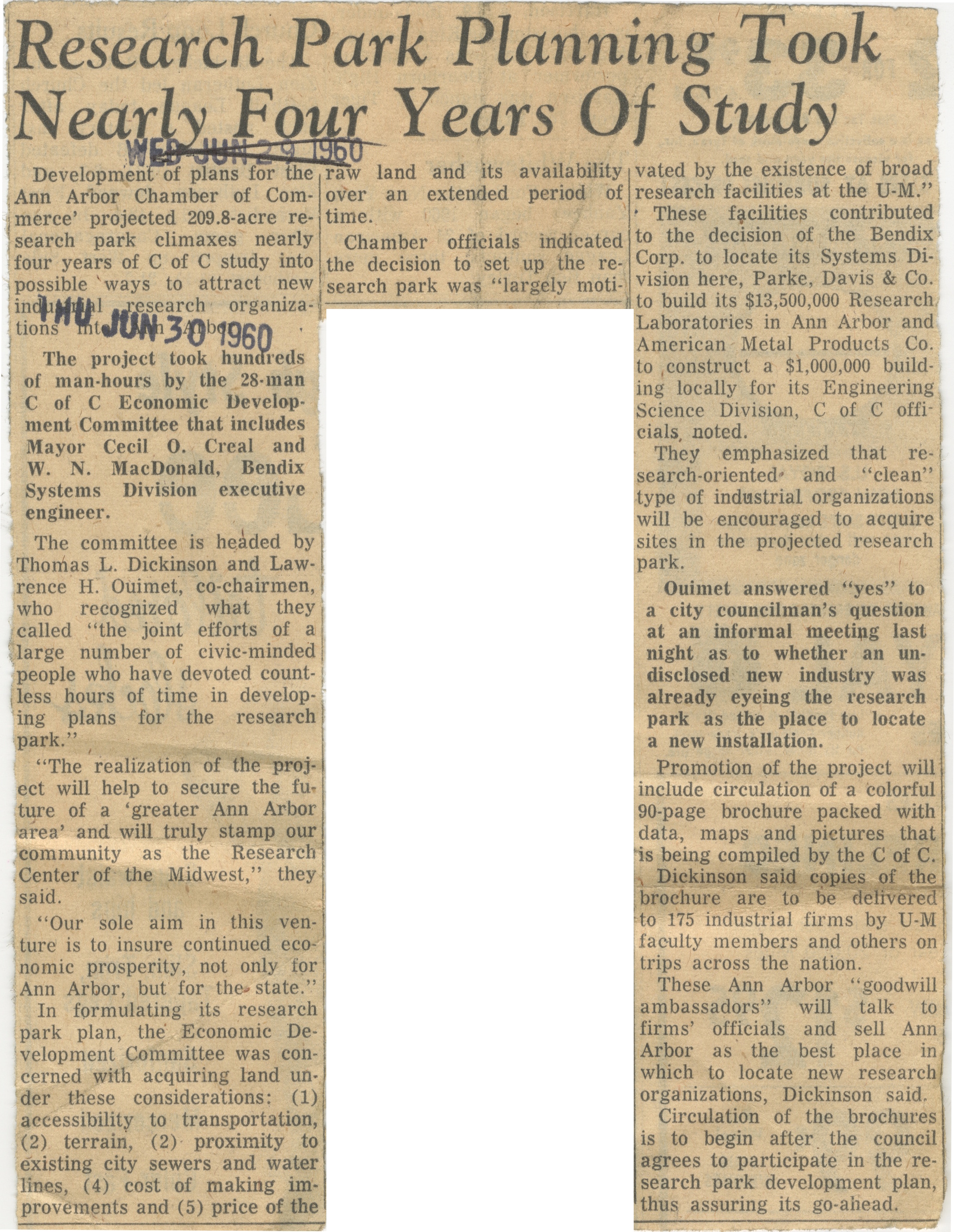 The committee is headed by Thomas L. Dickinson and Lawrence H. Ouimet, co-chairmen, who recognized what they called “the joint efforts of a large number of civic-minded people who have devoted countless hours of time in developing plans for the research park."

"The realization of the project will help to secure the future of a 'greater Ann Arbor area' and will truly stamp our community as the Research Center of the Midwest," they said.

"Our sole aim in this venture is to insure continued economic prosperity, not only for Ann Arbor, but for the state."

In formulating its research park plan, the Economic Development Committee was concerned with acquiring land under these considerations: (1) accessibility to transportation, (2) terrain, (3) proximity to existing city sewers and water lines, (4) cost of making improvements and (5) price of the raw land and its availability over an extended period of time.

Chamber officials indicated the decision to set up the research park was “largely motivated by the existence of broad research facilities at the U-M.”

These facilities contributed to the decision of the Bendix Corp. to locate its Systems Division here, Parke, Davis & Co. to build its $13,500,000 Research Laboratories in Ann Arbor and American Metal Products Co. to construct a $1,000,000 building locally for its Engineering Science Division, C of C officials, noted.

They emphasized that research-oriented and “clean” type of industrial organizations will be encouraged to acquire sites in the projected research park.

Ouimet answered “yes” a city councilman’s question at an informal meeting last night as to whether an undisclosed new industry was already eyeing the research park as the place to locate a new installation.

Promotion of the project will include circulation of a colorful 90-page brochure packed with data, maps and pictures that is being compiled by the C of C.

Dickinson said copies of the brochure are to be delivered to 175 industrial firms by U-M faculty members and others on trips across the nation.

These Ann Arbor “goodwill ambassadors” will talk to firms’ officials and sell Ann Arbor as the best place in which to locate new research organizations, Dickinson said.

Circulation of the brochures is to begin after the council agrees to participate in the research park development plan, thus assuring its go-ahead.