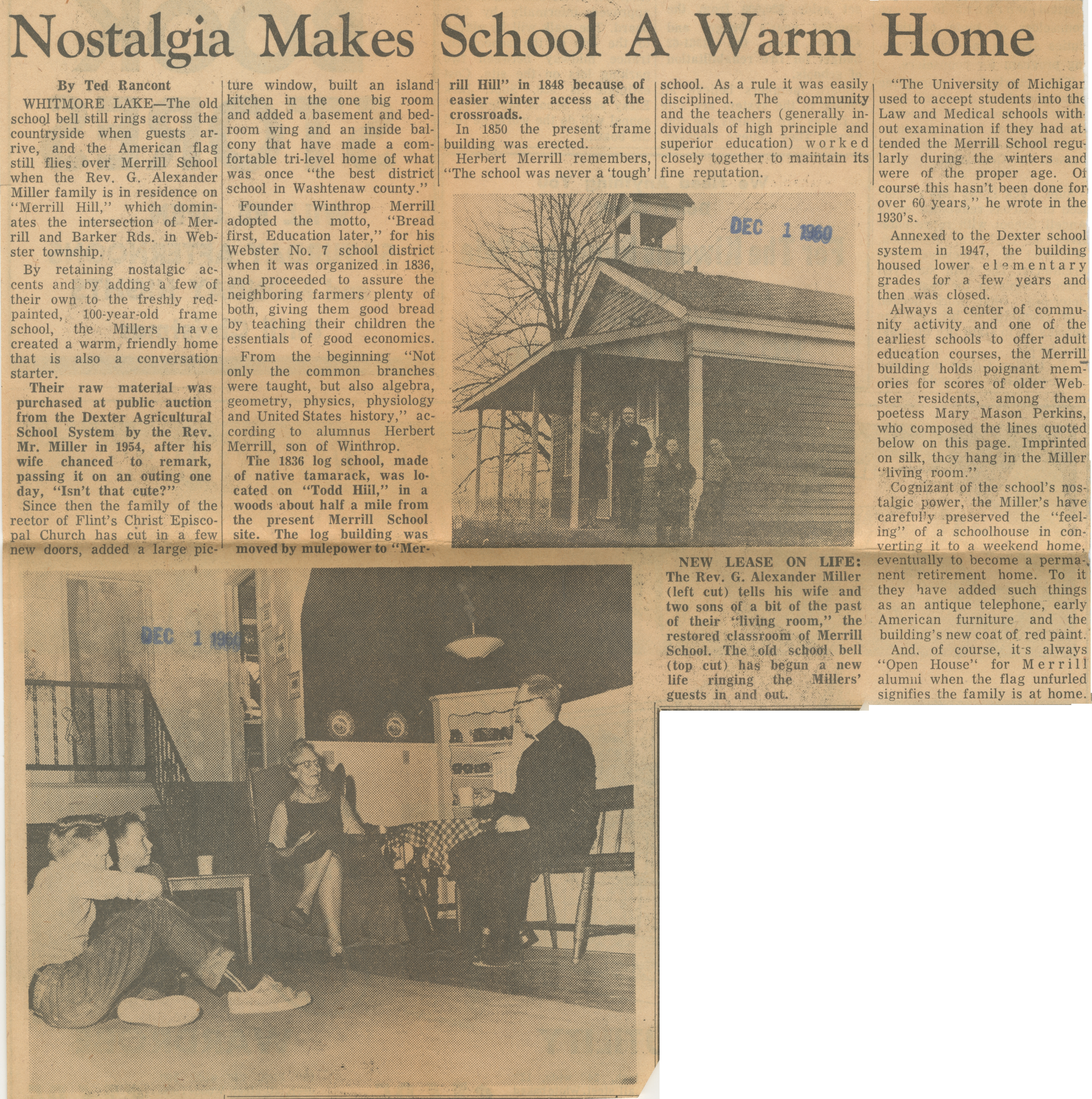 WHITMORE LAKE—The old school bell still rings across the countryside when guests arrive, and the American flag still flies over Merrill School when the Rev. G. Alexander Miller family is in residence on “Merrill Hill,’’ which dominates the intersection of Merrill and Barker Rds. in Webster township.

By retaining nostalgic accents and by adding a few of their own to the freshly red-painted, 100-year-old frame school, the Millers have created a warm, friendly home that is also a conversation starter.

Their raw material was purchased at public auction from the Dexter Agricultural School System by the Rev. Mr. Miller in 1954, after his wife chanced to remark, passing it on an outing one day, “Isn’t that cute?”

Since then the family of the rector of Flint’s Christ Episcopal Church has cut in a few new doors, added a large picture window, built an island kitchen in the one big room and added a basement and bedroom wing and an inside balcony that have made a comfortable tri-level home of what was once “the best district school in Washtenaw county.” Founder Winthrop Merrill adopted the motto, “Bread first, Education later,” for his Webster No. 7 school district when it was organized in 1836, and proceeded to assure the neighboring farmers plenty of both, giving them good bread by teaching their children the essentials of good economics.

From the beginning “Not only the common branches were taught, but also algebra, geometry, physics, physiology and United States history,” according to alumnus Herbert Merrill, son of Winthrop.

The 1836 log school, made of native tamarack, was located on “Todd Hill,” in a woods about half a mile from the present Merrill School site. The log building was moved by mulepower to “Merrill Hill” in 1848 because of easier winter access at the crossroads.

In 1850 the present frame building was erected.

Herbert Merrill remembers, “The school was never a ‘tough’ school. As a rule it was easily disciplined. The community and the teachers (generally individuals of high principle and superior education) worked closely together to maintain its fine reputation.

“The University of Michigan used to accept students into the Law and Medical schools without examination if they had attended the Merrill School regularly during the winters and were of the proper age. Of course this hasn’t been done for over 60 years,” he wrote in the 1930’s.

Annexed to the Dexter school system in 1947, the building housed lower elementary grades for a few years and then was closed.

Always a center of community activity and one of the earliest schools to offer adult education courses, the Merrill building holds poignant memories for scores of older Webster residents, among them poetess Mary Mason Perkins, who composed the lines quoted below on this page. Imprinted on silk, they hang in the Miller “living room.”

Cognizant of the school’s nostalgic power, the Miller’s have carefully preserved the “feeling” of a schoolhouse in converting it to a weekend home, eventually to become a permanent retirement home. To it they have added such things as an antique telephone, early American furniture and the building’s new coat of red paint.

And. of course, it's always “Open House” for Merrill alumni when the flag unfurled signifies the family is at home.

The Rev. G. Alexander Miller (left cut) tells his wife and two sons of a bit of the past of their “living room,” the restored classroom of Merrill School. The old school bell (top cut) has begun a new life ringing the Millers’ guests in and out.