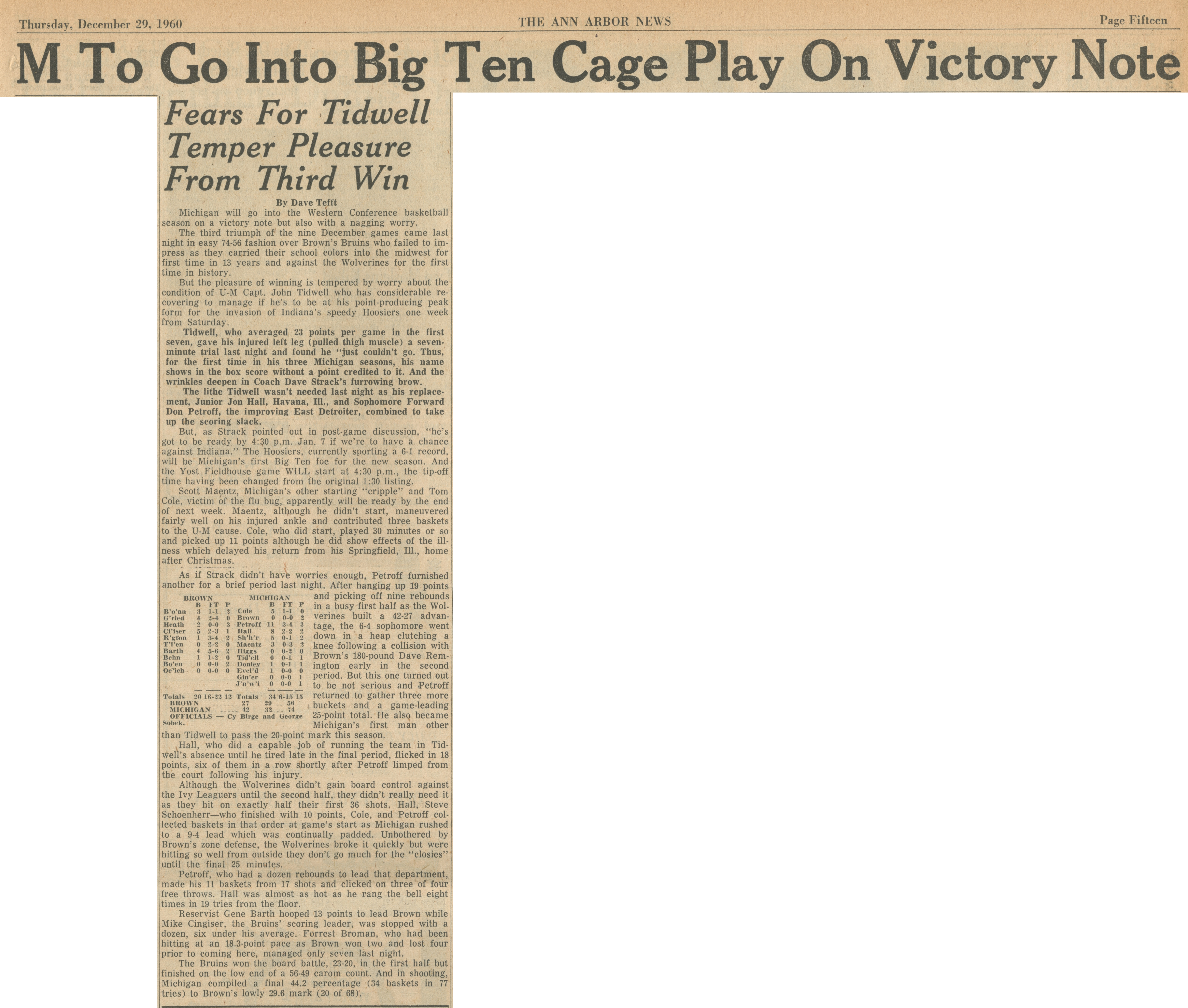 Michigan will go into the Western Conference basketball season on a victory note but also with a nagging worry.

The third triumph of the nine December games came last night in easy 74-56 fashion over Brown’s Bruins who failed to impress as they carried their school colors into the midwest for first time in 13 years and against the Wolverines for the first time in history.

But the pleasure of winning is tempered by worry about the condition of U-M Capt. John Tidwell who has considerable recovering to manage if he’s to be at his point-producing peak form for the invasion of Indiana's speedy Hoosiers one week from Saturday.

Tidwell, who averaged 23 points per game in the first seven, gave his injured left leg (pulled thigh muscle) a seven-minute trial last night and found he "just couldn't go. Thus, for the first time in his three Michigan seasons, his name shows in the box score without a point credited to it. And the wrinkles deepen in Coach Dave Strack’s furrowing brow.

But, as Strack pointed out in post-game discussion, “he's got to be ready by 4:30 p.m. Jan. 7 if we're to have a chance against Indiana.” The Hoosiers, currently sporting a 6-1 record, will be Michigan’s first Big Ten foe for the new season. And the Yost Fieldhouse game WILL start at 4:30 p.m., the tip-off time having been changed from the original 1:30 listing.

Scott Maentz, Michigan’s other starting “cripple" and Tom Cole, victim of the flu bug, apparently will be ready by the end of next week. Maentz, although he didn’t start, maneuvered fairly well on his injured ankle and contributed three baskets to the U-M cause. Cole, who did start, played 30 minutes or so and picked up 11 points although he did show effects of the illness which delayed his return from his Springfield, Ill., home after Christmas.

As if Strack didn’t have worries enough, Petroff furnished another for a brief period last night. After hanging up 19 points and picking off nine rebounds in a busy first half as the Wolverines built a 42-27 advantage, the 6-4 sophomore went down in a heap clutching a knee following a collision with Brown’s 180-pound Dave Remington early in the second period. But this one turned out to be not serious and Petroff returned to gather three more buckets and a game-leading 25-point total. He also became Michigan’s first man other than Tidwell to pass the 20-point mark this season.

Hall, who did a capable job of running the team in Tidwell’s absence until he tired late in the final period, flicked in 18 points, six of them in a row shortly after Petroff limped from the court following his injury.

Although the Wolverines didn’t gain board control against the Ivy Leaguers until the second half, they didn't really need it as they hit on exactly half their first 36 shots. Hall, Steve Schoenherr—who finished with 10 points, Cole, and Petroff collected baskets in that order at game’s start as Michigan rushed to a 9-4 lead which was continually padded. Unbothered by Brown’s zone defense, the Wolverines broke it quickly but were hitting so well from outside they don’t go much for the “closies” until the final 25 minutes.

Petroff, who had a dozen rebounds to lead that department, made his 11 baskets from 17 shots and clicked on three of four free throws. Hall was almost as hot as he rang the bell eight times in 19 tries from the floor.

Reservist Gene Barth hooped 13 points to lead Brown while Mike Cingiser, the Bruins’ scoring leader, was stopped with a dozen, six under his average. Forrest Broman, who had been hitting at an 18.3-point pace as Brown won two and lost four prior to coming here, managed only seven last night.