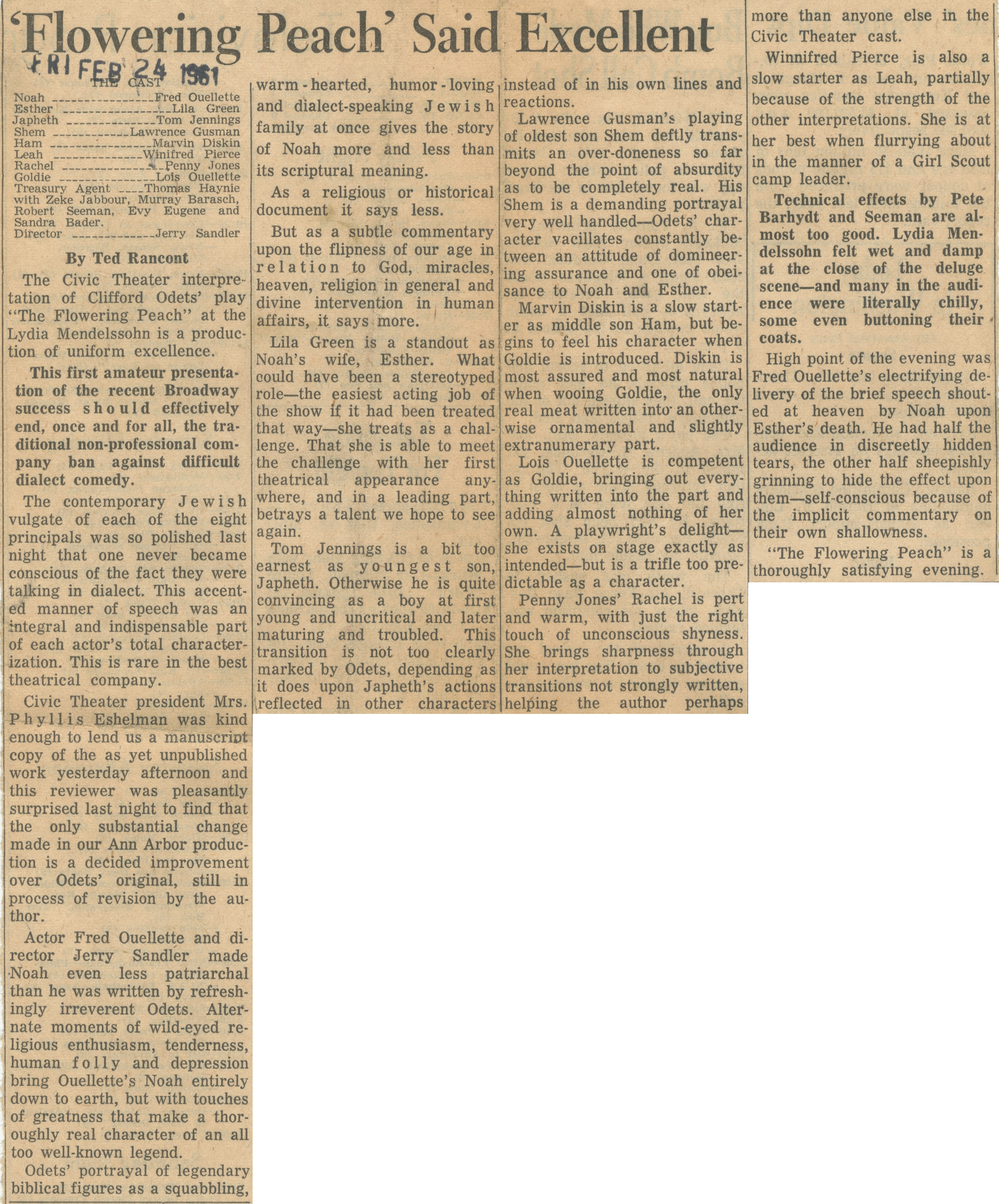 The Civic Theater interpretation of Clifford Odets’ play ‘The Flowering Peach” at the Lydia Mendelssohn is a production of uniform excellence.

This first amateur presentation of the recent Broadway success should effectively end, once and for all, the traditional non-professional company ban against difficult dialect comedy.

The contemporary Jewish vulgate of each of the eight principals was so polished last night that one never became conscious of the fact they were talking in dialect. This accented manner of speech was an integral and indispensable part of each actor’s total characterization. This is rare in the best theatrical company.

Civic Theater president Mrs. Phyllis Eshelman was kind enough to lend us a manuscript copy of the as yet unpublished work yesterday afternoon and this reviewer was pleasantly surprised last night to find that the only substantial change made in our Ann Arbor production is a decided improvement Odets’ original, still in process of revision by the author.

Actor Fred Ouellette and director Jerry Sandler made Noah even less patriarchal than he was written by refreshingly irreverent Odets. Alternate moments of wild-eyed religious enthusiasm, tenderness, human folly and depression bring Ouellette’s Noah entirely down to earth, but with touches of greatness that make a thoroughly real character of an all too well-known legend.

Odets’ portrayal of legendary biblical figures as a squabbling, warm - hearted, humor - loving and dialect-speaking Jewish family at once gives the story of Noah more and less than its scriptural meaning.

As a religious or historical document it says less.

But as a subtle commentary upon the flipness of our age in relation to God, miracles, heaven, religion in general and divine intervention in human affairs, it says more.

Lila Green is a standout Noah’s wife, Esther. What could have been a stereotyped role—the easiest acting job of the show If it had been treated that way—she treats as a challenge. That she is able to meet the challenge with her first theatrical appearance anywhere, and in a leading part, betrays a talent we hope to see

Tom Jennings is a bit too earnest as youngest Japheth. Otherwise he is quite convincing as a boy at first young and uncritical and later maturing and troubled. This transition is not too clearly marked by Odets, depending as it does upon Japheth’s actions reflected in other characters helping instead of in his own lines and reactions.

Lawrence Gusman’s playing of oldest son Shem deftly transmits an over-doneness so far beyond the point of absurdity to be completely real. His Shem is a demanding portrayal very well handled—Odets’ character vacillates constantly between an attitude of domineering assurance and one of obeisance to Noah and Esther. Marvin Diskin is a slow start as middle son Ham, but begins to feel his character when Goldie is introduced. Diskin is most assured and most natural when wooing Goldie, the only real meat written into an other-ornamental and slightly extranumerary part.

Lois Ouellette is competent as Goldie, bringing out everything written into the part and adding almost nothing of her own. A playwright’s delight— she exists on stage exactly as intended—but is a trifle too predictable as a character.

Penny Jones’ Rachel is pert and warm, with just the right touch of unconscious shyness. She brings sharpness through her interpretation to subjective transitions not strongly written, the author perhaps more than anyone else in the Civic Theater cast.

Winnifred Pierce is also a slow starter as Leah, partially because of the strength of the other interpretations. She is at her best when flurrying about in the manner of a Girl Scout camp leader.

Technical effects by Pete Barhydt and Seeman are almost too good. Lydia Mendelssohn felt wet and damp at the close of the deluge scene—and many in the audience were literally chilly, some even buttoning their coats.

High point of the evening was Fred Ouellette’s electrifying delivery of the brief speech shouted at heaven by Noah upon Esther’s death. He had half the audience in discreetly hidden tears, the other half sheepishly grinning to hide the effect upon them—self-conscious because of the implicit commentary on their own shallowness.

“The Flowering Peach” is a thoroughly satisfying evening.