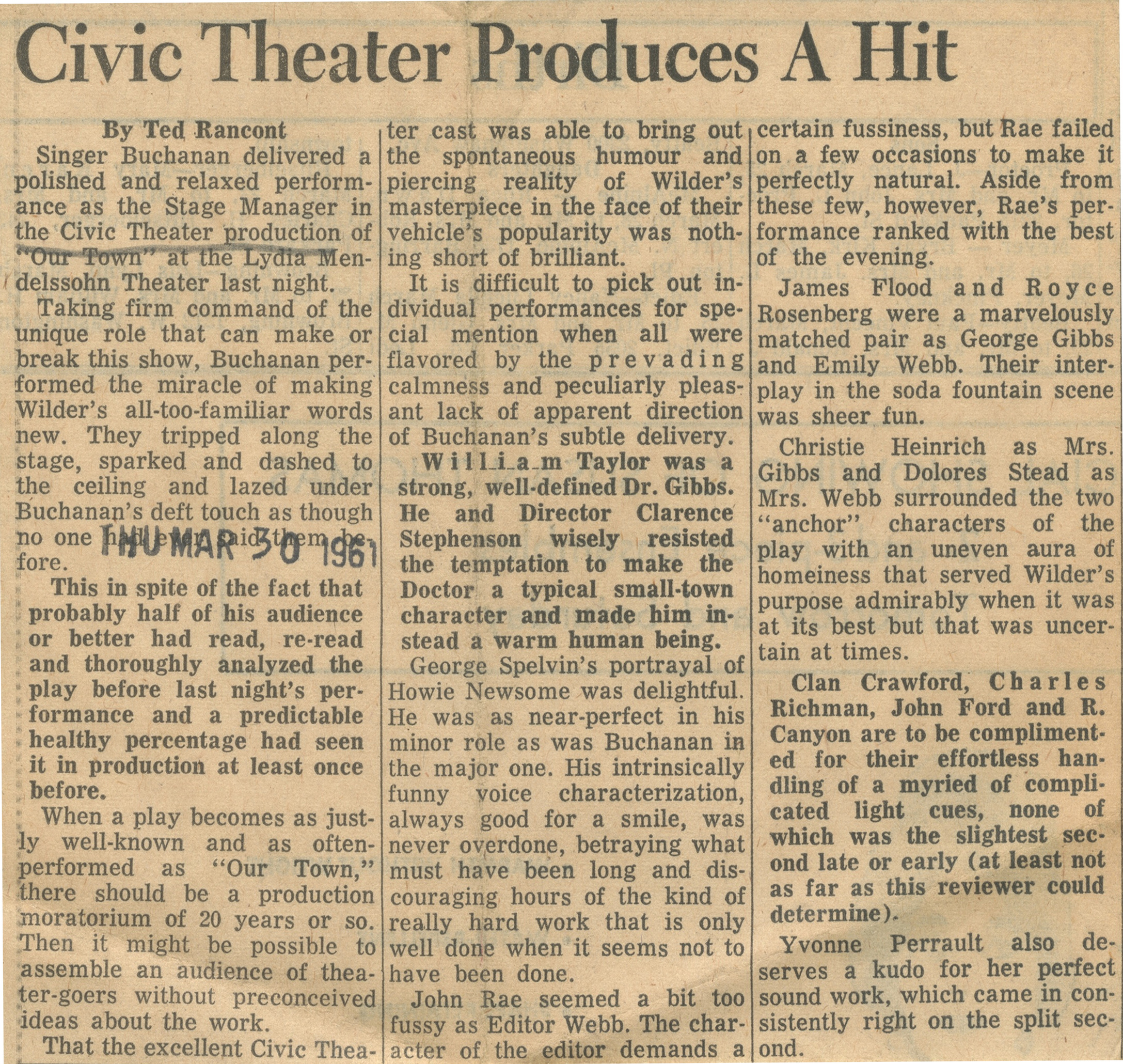 ﻿Civic Theater Produces A Hit<br><br>By Ted Rancont<br><br>Singer Buchanan delivered a polished and relaxed performance as the Stage Manager in the Civic Theater production of **01Jr^o^”'arfBeTydia‘'Men-delssohn Theater last night.<br><br>Taking firm command of the unique role that can make or break this show, Buchanan performed the miracle of making Wilder’s all-too-familiar words new. They tripped along the stage, sparked and dashed to the ceiling and lazed under Buchanan’s deft touch as though<br><br>This in spite of the fact that probably half of his audience or better had read, re-read and thoroughly analyzed the play before last night’s performance and a predictable healthy percentage had seen it in production at least once before.<br><br>; When a play becomes as justly well-known and as often-performed as “Our Town,” there should be a production moratorium of 20 years or so. .Then it might be possible to assemble an audience of theater-goers without preconceived ideas about the work.<br><br>That the excellent Civic Thea-<br><br>ter cast was able to bring out the spontaneous humour and piercing reality of Wilder’s masterpiece in the face of their vehicle's popularity was nothing short of brilliant.<br><br>It is difficult to pick out individual performances for special mention when all were flavored by the prevading calmness and peculiarly pleasant lack of apparent direction of Buchanan’s subtle delivery.<br><br>WiLLi-a-m Taylor was a strong, well-defined Dr. Gibbs. He and Director Clarence Stephenson wisely resisted the temptation to make the Doctor a typical small-town character and made him instead a warm human being.<br><br>George Spelvin’s portrayal of Howie Newsome was delightful. He was as near-perfect in his minor role as was Buchanan in the major one. His intrinsically funny voice characterization, always good for a smile, was never ovprdone, betraying what must have been long and discouraging hours of the kind of really hard work that is only well done when it seems not to have been done.<br><br>John Rae seemed a bit too fussy as Editor Webb. The character of the editor demands a<br><br>certain fussiness, but Rae failed on a few occasions to make it perfectly natural. Aside from these few, however, Rae’s performance ranked with the best of the evening.<br><br>James Flood and Royce Rosenberg were a marvelously matched pair as George Gibbs i and Emily Webb. Their inter-1 play in the soda fountain scene was sheer fun.<br><br>Christie Heinrich as Mrs. Gibbs and Dolores Stead as Mrs. Webb surrounded the two “anchor” characters of the play with an uneven aura of homeiness that served Wilder’s purpose admirably when it was at its best but that was uncertain at times.<br><br>Clan Crawford, Charles Richman, John Ford and R. Canyon are to be complimented for their effortless handling of a myried of complicated light cues, none of which was the slightest second late or early (at least not as far as this reviewer could determine).<br><br>Yvonne Perrault also deserves a kudo for her perfect sound work, which came in consistently right on the split second.