Drops In After 34 Years 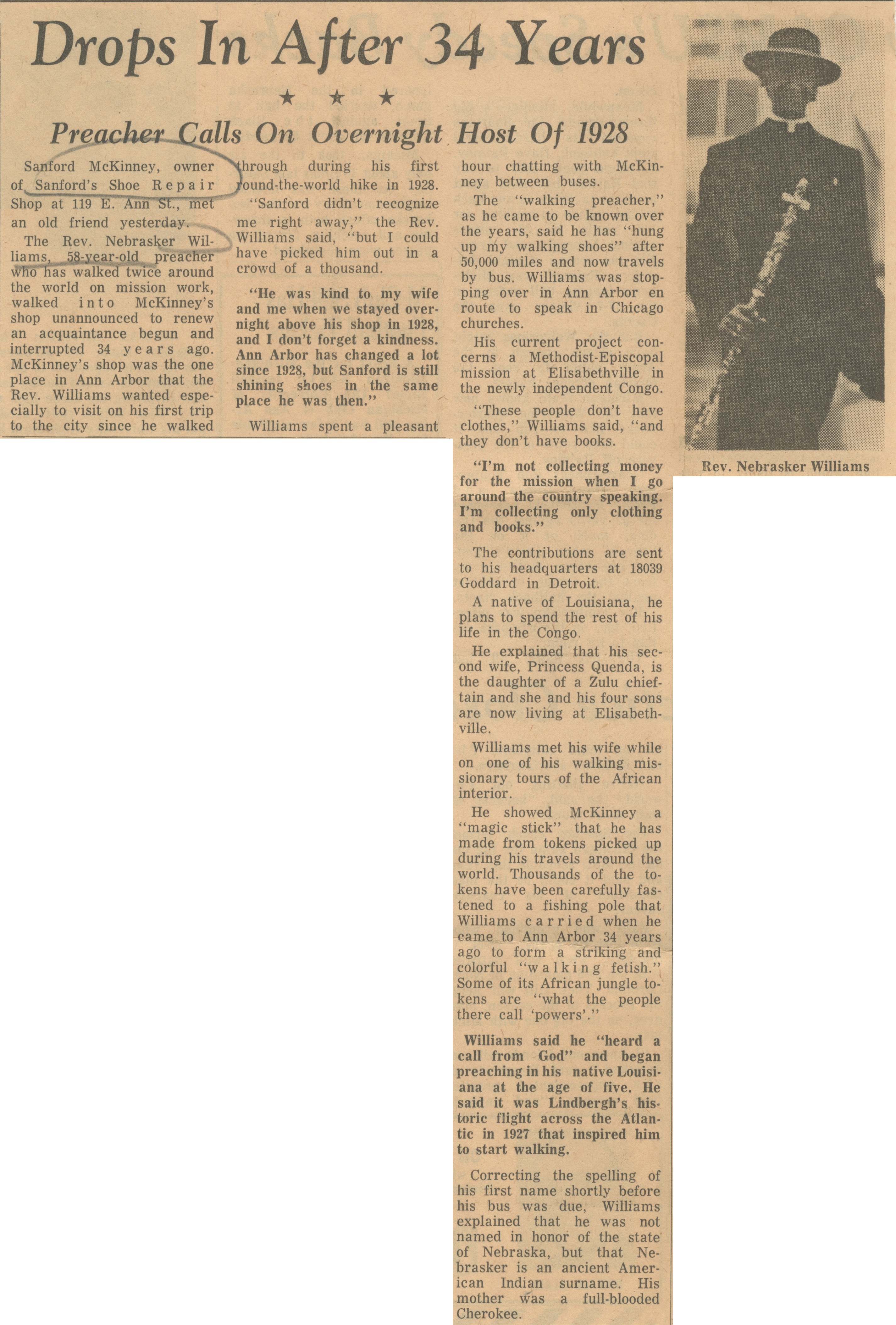 ﻿Drops In After 34 Years

Preacher Calls On Overnight Host Of 1928

The Rev. Nebrasker Williams, 58-year-old preacher who has walked twice around the world on mission work, walked into McKinney’s shop unannounced to renew an acquaintance begun and interrupted 34 years ago. McKinney’s shop was the one place in Ann Arbor that the Rev. Williams wanted especially to visit on his first trip to the city since he walked through during his first round-the-world hike in 1928.

"Sanford didn't recognize me right away, the Rev. Williams said, “but I could have picked him out in a crowd of a thousand.

“He was kind to my wife and me when we stayed overnight above his shop in 1928, and I don't forget a kindness. Ann Arbor has changed a lot since 1928, but Sanford is still shining shoes in the same place he was then.”

Williams spent a pleasant hour chatting with McKinney between buses.

The “walking preacher,” as he came to be known over the years, said he has “hung up my walking shoes” after 50,000 miles and now travels by bus. Williams was stopping over in Ann Arbor en route to speak in Chicago churches.

His current project concerns a Methodist-Episcopal mission at Elisabethville in the newly independent Congo.

"These people don’t have clothes,” Williams said, “and they don’t have books.

“I’m not collecting money for the mission when I go around the country speaking. I’m collecting only clothing and books.”

The contributions are sent to his headquarters at 18039 Goddard in Detroit.

A native of Louisiana, he plans to spend the rest of his life in the Congo.

He explained that his second wife, Princess Quenda, is the daughter of a Zulu chieftain and she and his four sons are now living at Elisabethville.

Williams met his wife while on one of his walking missionary tours of the African interior.

He showed McKinney a "magic stick” that he has made from tokens picked up during his travels around the world. Thousands of the tokens have been carefully fastened to a fishing pole that Williams carried when he came to Ann Arbor 34 years ago to form a striking and colorful "walking fetish.” Some of its African jungle tokens are “what the people there call ‘powers’.”

Williams said he “heard a call from God” and began preaching in his native Louisiana at the age of five. He said it was Lindbergh’s historic flight across the Atlantic in 1927 that inspired him to start walking.

Correcting the spelling of his first name shortly before his bus was due, Williams explained that he was not named in honor of the state of Nebraska, but that Nebrasker is an ancient American Indian surname. His mother was a full-blooded Cherokee.