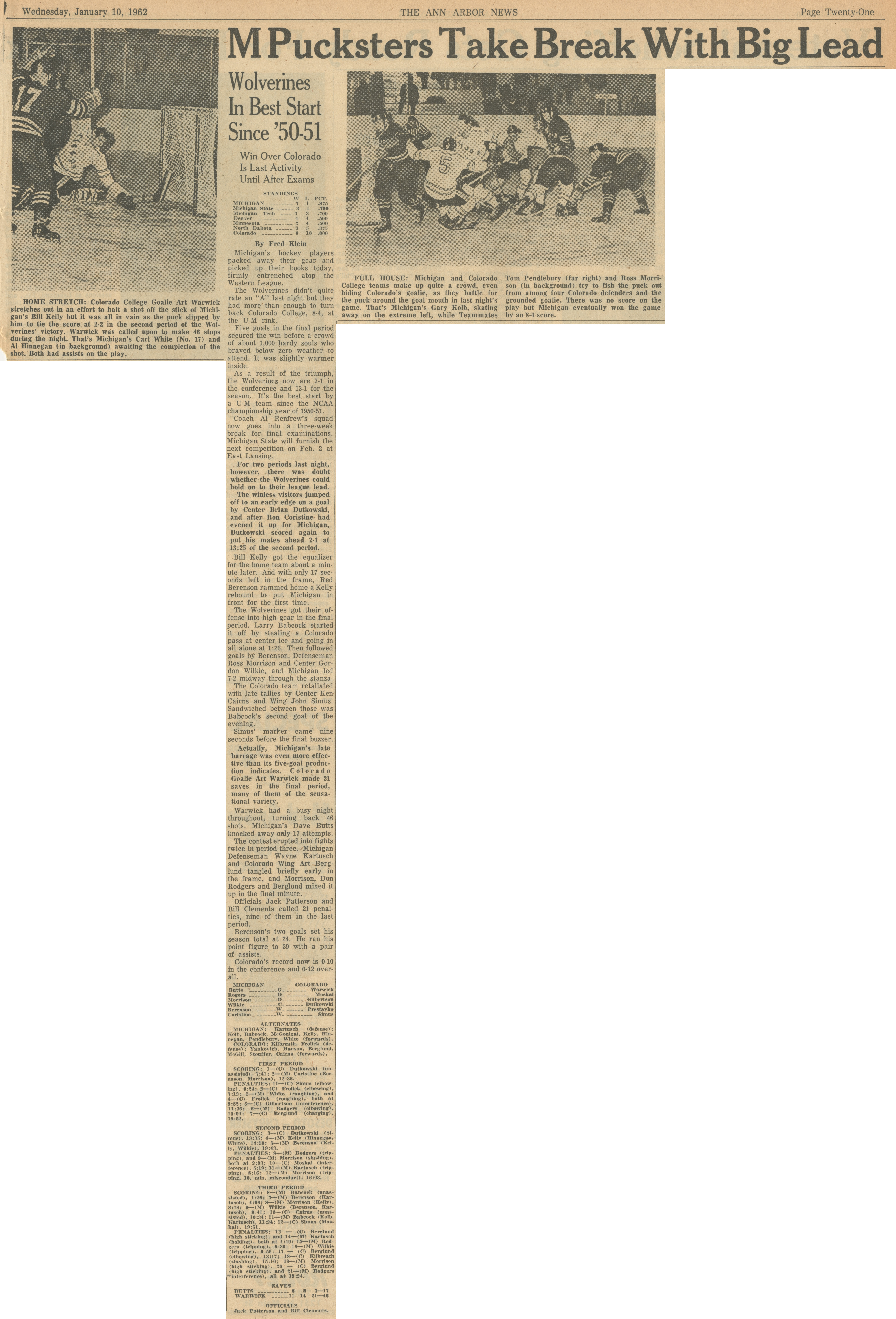 Wolverines In Best Start Since ’50-51

Win Over Colorado Is Last Activity Until After Exams

Michigan’s hockey players packed away their gear and picked up their books today, firmly entrenched atop the Western League.

The Wolverines didn't quite rate an "A" last night but they had more than enough to turn back Colorado College, 8-4, at the U-M rink.

Five goals in the final period secured the win before a crowd of about 1,000 hardy souls who braved below zero weather to attend. It was slightly warmer inside.

As a result of the triumph, the Wolverines now are 7-1 in the conference and 13-1 for the season. It’s the best start by a U-M team since the NCAA championship year of 1950-51.

Coach Al Renfrew’s squad now goes into a three-week break for final examinations. Michigan State will furnish the next competition on Feb. 2 at East Lansing.

For two periods last night, however, there was doubt whether the Wolverines could hold on to their league lead.

The winless visitors jumped off to an early edge on a goal by Center Brian Dutkowski, and after Ron Coristine had evened it up for Michigan, Dutkowski scored again to put his mates ahead 2-1 at 13:25 of the second period.

Bill Kelly got the equalizer for the home team about a minute later. And with only 17 seconds left in the frame, Red Berenson rammed home a Kelly rebound to put Michigan in front for the first time.

The Wolverines got their offense into high gear in the final period. Larry Babcock started it off by stealing a Colorado pass at center ice and going in all alone at 1:26. Then followed goals by Berenson, Defenseman Ross Morrison and Center Gordon Wilkie, and Michigan led 7-2 midway through the stanza.

The Colorado team retaliated with late tallies by Center Ken Cairns and Wing John Simus. Sandwiched between those was Babcock’s second goal of the evening.

Actually, Michigan’s late barrage was even more effective than its five-goal production indicates. Colorado Goalie Art Warwick made 21 saves in the final period, many of them of the sensational variety.

Warwick had a busy night throughout, turning back 46 shots. Michigan’s Dave Butts knocked away only 17 attempts.

The contest erupted into fights twice in period three. Michigan Defenseman Wayne Kartusch and Colorado Wing Art Berglund tangled briefly early in the frame, and Morrison, Don Rodgers and Berglund mixed it up in the final minute.

Officials Jack Patterson and Bill Clements called 21 penalties, nine of them in the last period,

Berenson’s two goals set his season total at 24. He ran his point figure to 39 with a pair of assists.

HOME STRETCH: Colorado College Goalie Art Warwick stretches out in an effort to halt a shot off the stick of Michigan’s Bill Kelly but it was all in vain as the puck slipped by him to tie the score at 2-2 in the second period of the Wolverines’ victory. Warwick was called upon to make 46 stops during the night. That’s Michigan’s Carl White (No. 17) and Al Hinnegan (in background) awaiting the completion of the shot. Both had assists on the play.

FULL HOUSE: Michigan and Colorado College teams make up quite a crowd, even hiding Colorado’s goalie, as they battle for the puck around the goal mouth in last night’s game. That’s Michigan’s Gary Kolb, skating away on the extreme left, while Teammates Tom Pendlebury (far right) and Ross Morrison (in background) try to fish the puck out from among four Colorado defenders and the grounded goalie. There was no score on the play but Michigan eventually won the game by an 8-4 score.