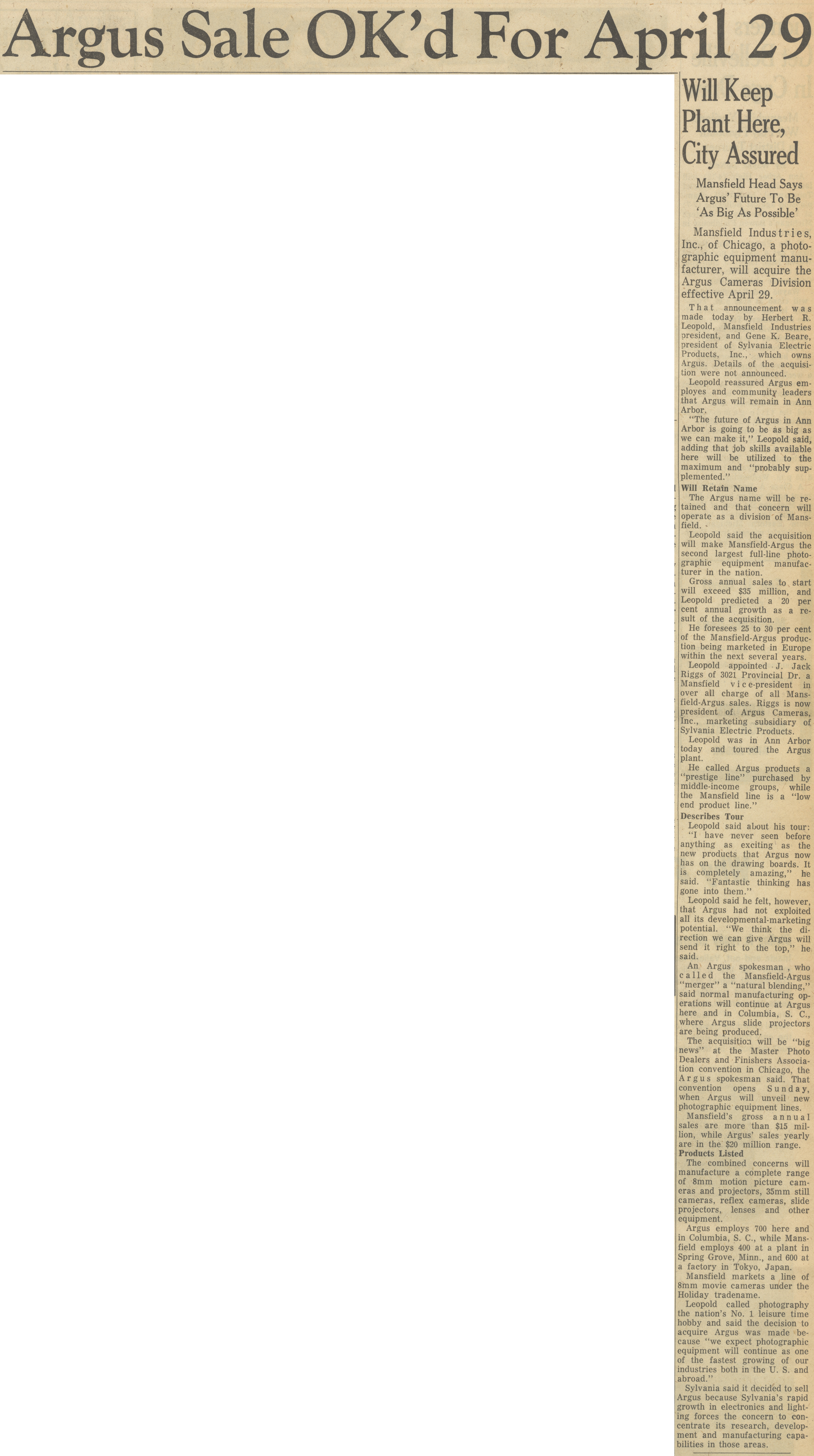 Mansfield Head Says Argus’ Future To Be ‘As Big As Possible’

That announcement was made today by Herbert R. Leopold, Mansfield Industries president, and Gene K. Beare, president of Sylvania Electric Products, Inc., which owns Argus. Details of the acquisition were not announced.

- "The future of Argus in Ann Arbor is going to be as big as we can make it,” Leopold said, adding that job skills available here will be utilized to the maximum and “probably supplemented.”

The Argus name will be retained and that concern will operate as a division of Mansfield.

Gross annual sales to start will exceed $35 million, and Leopold predicted a 20 per cent annual growth as a result of the acquisition.

He foresees 25 to 30 per cent of the Mansfield-Argus production being marketed in Europe within the next several years.

Leopold appointed J. Jack Riggs of 3021 Provincial Dr. a Mansfield vice-president in over all charge of all Mansfield-Argus sales. Riggs is now president of Argus Cameras, Inc., marketing subsidiary of Sylvania Electric Products.

Leopold was in Ann Arbor today and toured the Argus plant.

He called Argus products a "prestige line” purchased by middle-income groups, while the Mansfield line is a "low end product line.”

Leopold said about his tour:

"I have never seen before anything as exciting as the new products that Argus now has on the drawing boards. It is completely amazing,” he said. ''Fantastic thinking has gone into them."

Leopold said he felt, however, that Argus had not exploited all its developmental-marketing potential. "We think the direction we can give Argus will send it right to the top,” he said.

An Argus spokesman , who called the Mansfield-Argus “merger” a “natural blending,” said normal manufacturing operations will continue at Argus here and in Columbia, S. C., where Argus slide projectors are being produced.

The acquisition will be “big news" at the Master Photo Dealers and Finishers Association convention in Chicago, the Argus spokesman said. That convention opens Sunday, when Argus will unveil new photographic equipment lines.

Mansfield’s gross annual sales are more than $15 million, while Argus’ sales yearly are in the $20 million range.

Mansfield markets a line of 8mm movie cameras under the Holiday tradename.

Leopold called photography the nation’s No. 1 leisure time hobby and said the decision to acquire Argus was made because “we expect photographic equipment will continue as one of the fastest growing of our industries both in the U. S. and abroad.”

Sylvania said it decided to sell Argus because Sylvania’s rapid growth in electronics and lighting forces the concern to concentrate its research, development and manufacturing capabilities in those areas.