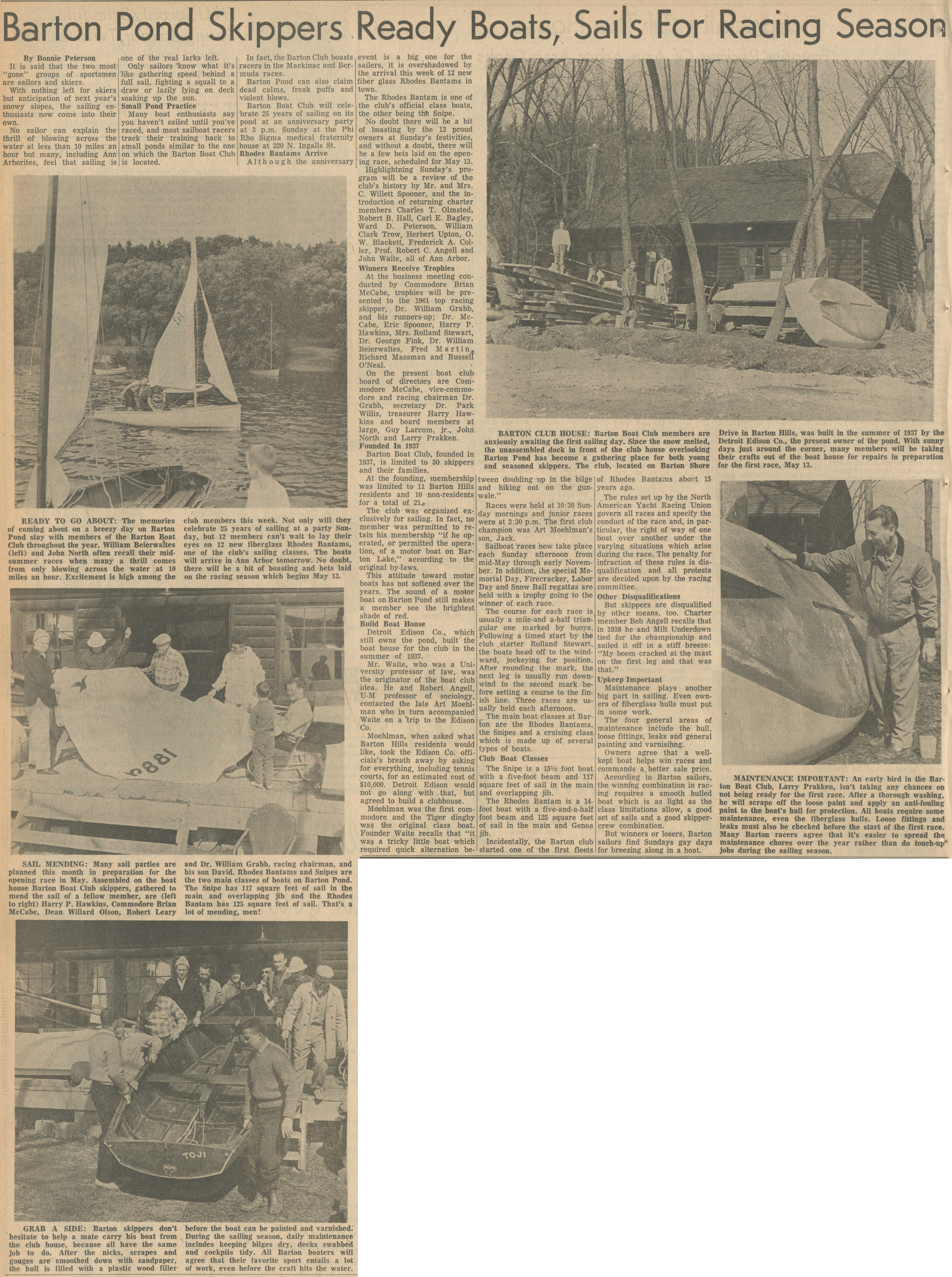 It is said that the two most "gone" groups of sportsmen are sailors and skiers.

With nothing left for skiers but anticipation of next year's snowy slopes, the sailing enthusiasts now come into their own.

No sailor can explain the thrill of blowing across the water at less than 10 miles an hour but many, including Ann Arborites, feel that sailing is one of the real larks left.

Only sailors know what it's like gathering speed behind a full sail, fighting a squall to a draw or lazily lying on deck soaking up the sun.

Many boat enthusiasts say you haven't sailed until you've raced, and most sailboat racers track their training back to small ponds similar to the one on which the Barton Boat club is located.

In fact, the Barton Club boasts racers in the Mackinac and Bermuda races.

Barton Boat Club will celebrate 25 years of sailing on its pond at an anniversary party at 3 p.m. Sunday at the Phi Rho Sigma medical fraternity house at 220 N. Ingalls St.

Although the anniversary event is a big one for the sailors, it is overshadowed by the arrival this week of 12 new fiber glass Rhodes Bantams in town.

The Rhodes Bantam is one of the club's official class boats, the other being the Snipe.

No doubt there will be a bit of boasting by the 12 proud owners at Sunday's festivities, and without a doubt, there will be a few bets laid on the opening race, scheduled for May 13.

Barton Boat Club, founded in 1937, is limited to 50 skippers and their families.

At the founding, membership was limited to 11 Barton Hills residents and 10 non-residents for a total of 21.

The club was organized exclusively for sailing. In fact, no member was permitted to retain his membership "if he operated, or permitted the operation, of a motor boat on Barton Lake," according to the original by-laws.

This attitude toward motor boats has not softened over the years. The sound of a motor boat on Barton Pond still makes a member see the brightest shade of red.

Detroit Edison Co., which still owns the pond, built the boat house for the club in the summer of 1937.

Mr. Waite, who was a University professor of law, was the originator of the boat club idea. He and Robert Angell, U-M professor of sociology, contacted the late Art Moehlman who in turn accompanied Waite on a trip to the Edison Co.

Moehlman, when asked what Barton Hills residents would like, took the Edison Co. officials' breath away by asking for everything, including tennis courts, for an estimated cost of $10,000. Detroit Edison would not go along with that, but agreed to build a clubhouse.

Moehlman was the first commodore and the Tiger dinghy was the original class boat. Founder Waite recalls that "it was a tricky little boat which required quick alternation between doubling up in the bilge and hiking on the gunwale."

Races were held at 10:30 Sunday mornings and junior races were at 2:30 pm. The first club champion was Art Moehlman's son, Jack.

Sailboat races now take place each Sunday afternoon from mid-May through early November. In addition, the special Memorial Day, Firecracker, Labor Day and Snow Ball regattas are held with a trophy going to the winner of each race.

The course for each race is usually a mile-and-a-half triangular one marked by buoys. Following a timed start by the club starter Rolland Stewart, the boats head off to the windward, jockeying for position. After rounding the mark, the next leg is usually run downwind to the second mark before setting a course to the finish line. Three races are usually  held each afternoon.

The main boat classes at Barton are the Rhodes Bantams and Snipes and a cruising class which is made up of several types of boats.

The Snipe is a 15 1/2 foot boat with a five-foot beam and 117 square feet of sail in the main and overlapping jib.

The Rhodes Bantam is a 14-foot boat with a five-and-a-half foot beam and 125 square feet of sail in the main and Genoa jib.

Incidentally, the Barton club started one of the first fleets of Rhodes Bantams about 15 years ago.

The rules set up by the North American Yacht Racing Union govern all races and specify the conduct of the race and, in particular, the right of way of one boat over another under the varying situations which arise during the race. The penalty for infraction of these rules is disqualification and all protests are decided upon by the racing committee.

But skippers are disqualified by other means, too. Charter member Bob Angell recalls that in 1938 he and Milt Underdown tied for the championship and sailed it off in a stiff breeze: "My boom cracked at the mast on the first leg and that was that."

Maintenance plays another big part in sailing. Even owners of fiberglass hulls must put in some work.

The four general areas of maintenance include the hull, loose fittings, leaks and general painting and varnishing.

According to Barton sailors, the winning combination in racing requires a smooth hulled boat which is as light as the class limitations allow, a good set of sails and a good skipper-crew combination.

But winners or losers, Barton sailors find Sundays gay days for breezing along in a boat.

READY TO GO ABOUT: The memories of coming about on a breezy day on Barton Pond stay with members of the Barton Boat Club throughout the year. William Beierwaltes (left) and John North often recall their midsummer races when many a thrill comes from blowing across the water at 10 miles an hour. Excitement is high among the club members this week. Not only will they celebrate 25 years of sailing at a party Sunday, but 12 members can't wait to lay their eyes on 12 new fiberglass Rhodes Bantams, one of the club's sailing classes. The boats will arrive in Ann Arbor tomorrow. No doubt, there will be a bit of boasting and bets laid on the racing season which begins May 13.

SAIL MENDING: Many sail parties are planned this month in preparation for the opening race in May. Assembled on the boat house Barton Boat Club skippers, gathered to mend the sail of a fellow member, are (left to right) Harry P. Hawkins, Commodore Brian McCabe, Dean Willard Olson, Robert Leary and Dr. William Grabb, racing chairman, and his son David. Rhodes Bantams and Snipes are the two main classes of boats on Barton Pond. The Snipe has 117 square feet of sail in the main and overlapping jib and the Rhodes Bantam has 125 square feet of sail. That's a lot of mending, men!

GRAB A SIDE: Barton skippers don't hesitate to help a mate carry his boat from the club house, because all have the same job to do. After the nicks, scrapes and gouges are smoothed down with sandpaper, the hull is filled with a plastic wood filler before the boat can be painted and varnished. During the sailing season, daily maintenance includes keeping bilges dry, decks swabbed and cockpits tidy. All Barton boaters will agree that their favorite sport entails a lot of work, even before the craft hits the water.

BARTON CLUB HOUSE: Barton Boat Club members are anxiously awaiting the first sailing day. Since the snow melted, the unassembled dock in front of the club house overlooking Barton Pond has become a gathering place for both young and seasoned skippers. The club, located on Barton Shore Drive in Barton Hills, was built in the summer of 1937 by the Detroit Edison Co., the present owner of the pond. With sunny days just around the corner, many members will be taking their crafts out of the boat house for repairs in preparation for the first race, May 13.

MAINTENANCE IMPORTANT: An early bird in the Barton Boat Club, Larry Prakken, isn't taking any chances on not being ready for the first race. After a thorough washing, he will scrape off the loose paint and apply an anti-fouling paint to the boat's hull for protection. All boats require some maintenance, even the fiberglass hulls. Loose fittings and leaks must also be checked before the start of the first race. Many Barton racers agree that it's easier to spread the maintenance chores over the year rather than do touch-up jobs during the sailing season.