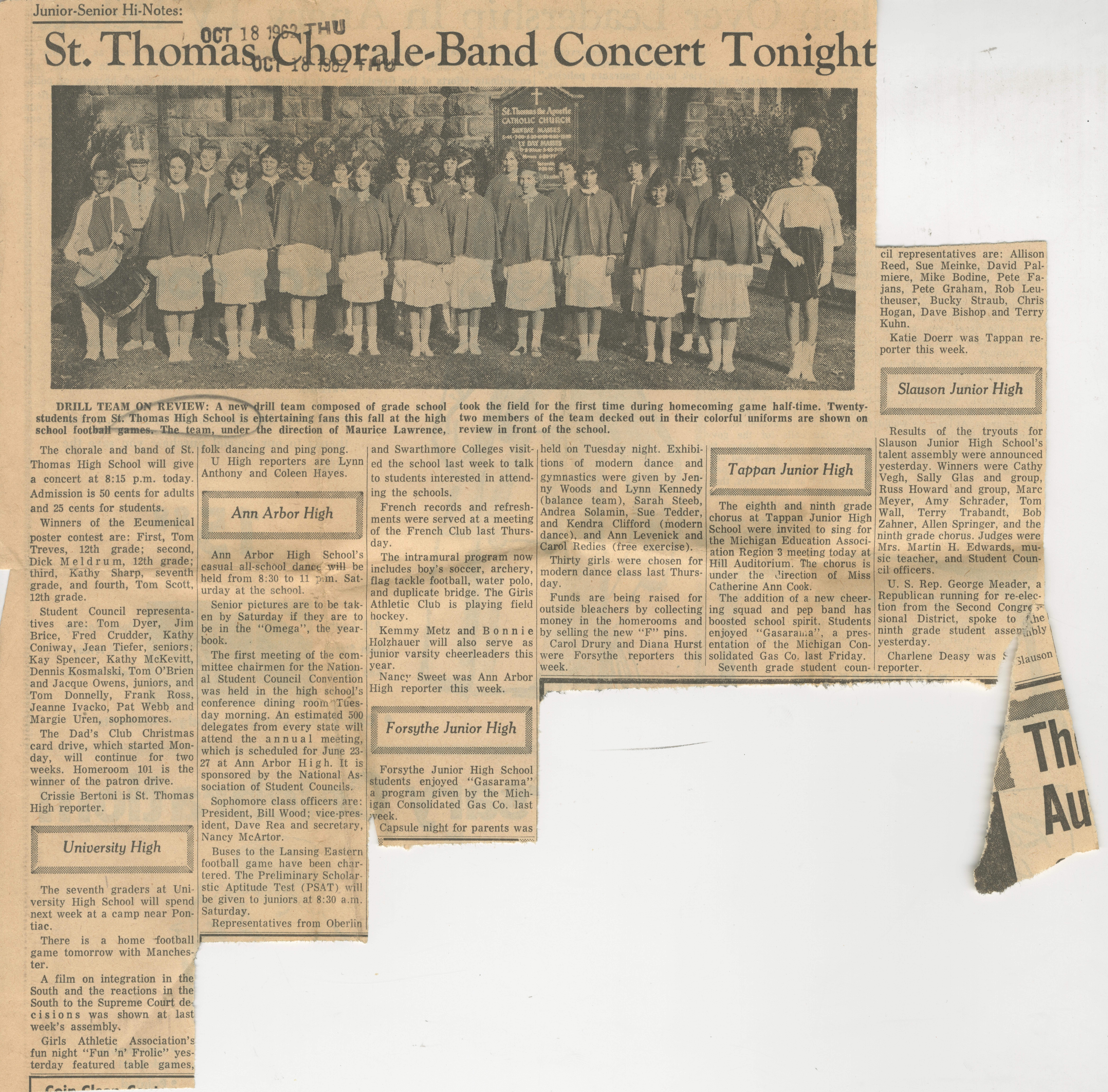 [image]:  DRILL TEAM ON REVIEW: A new drill team composed of grade school students from St. Thomas High School is entertaining fans this fall at the high school football games. The team, under the direction of Maurice Lawrence, took the field for the first time during homecoming game half-time.  Twenty-two members of the team decked out in their colorful uniforms are shown on review in front of the school.

The chorale and band of St. Thomas High School will give a concert at 8:15 p.m. today. Admission is 50 cents for adults and 25 cents for students.

The Dad’s Club Christmas card drive, which started Monday, will continue for two weeks. Homeroom 101 is the winner of the patron drive.

The seventh graders at University High School will spend next week at a camp near Pontiac.

There is a home football game tomorrow with Manchester.

A film on integration in the South and the reactions in the South to the Supreme Court decision was shown at last week's assembly.

U High reporters are Lynn Anthony and Coleen Hayes.

Ann Arbor High School’s casual all-school dance will be held from 8:30 to 11 p.m. Saturday at the school.

Senior pictures are to be taken by Saturday if they are to be in the “Omega”, the yearbook.

The first meeting of the committee chairmen for the National Student Council Convention was held in the high school’s conference dining room Tuesday morning. An estimated 500 delegates from every state will attend the annual meeting, which is scheduled for June 23-27 at Ann Arbor High. It is sponsored by the National Association of Student Councils.

Buses to the Lansing Eastern football game have been chartered. The Preliminary Scholastic Aptitude Test (PSAT) will be given to juniors at 8:30 a m. Saturday.

Representatives from Oberlin and Swarthmore Colleges visited the school last week to talk to students interested in attending the schools.

French records and refreshments were served at a meeting of the French Club last Thursday.

Funds are being raised for outside bleachers by collecting money in the homerooms and by selling the new “F” pins.

Carol Drury and Diana Hurst were Forsythe reporters this week.

The eighth and ninth grade chorus at Tappan Junior High School were invited to sing for the Michigan Education Association Region 3 meeting today at Hill Auditorium. The chorus is under the direction of Miss Catherine Ann Cook.

U. S. Rep. George Meader, a Republican running for re-election from the Second Congressional District, spoke to the ninth grade student assembly yesterday.