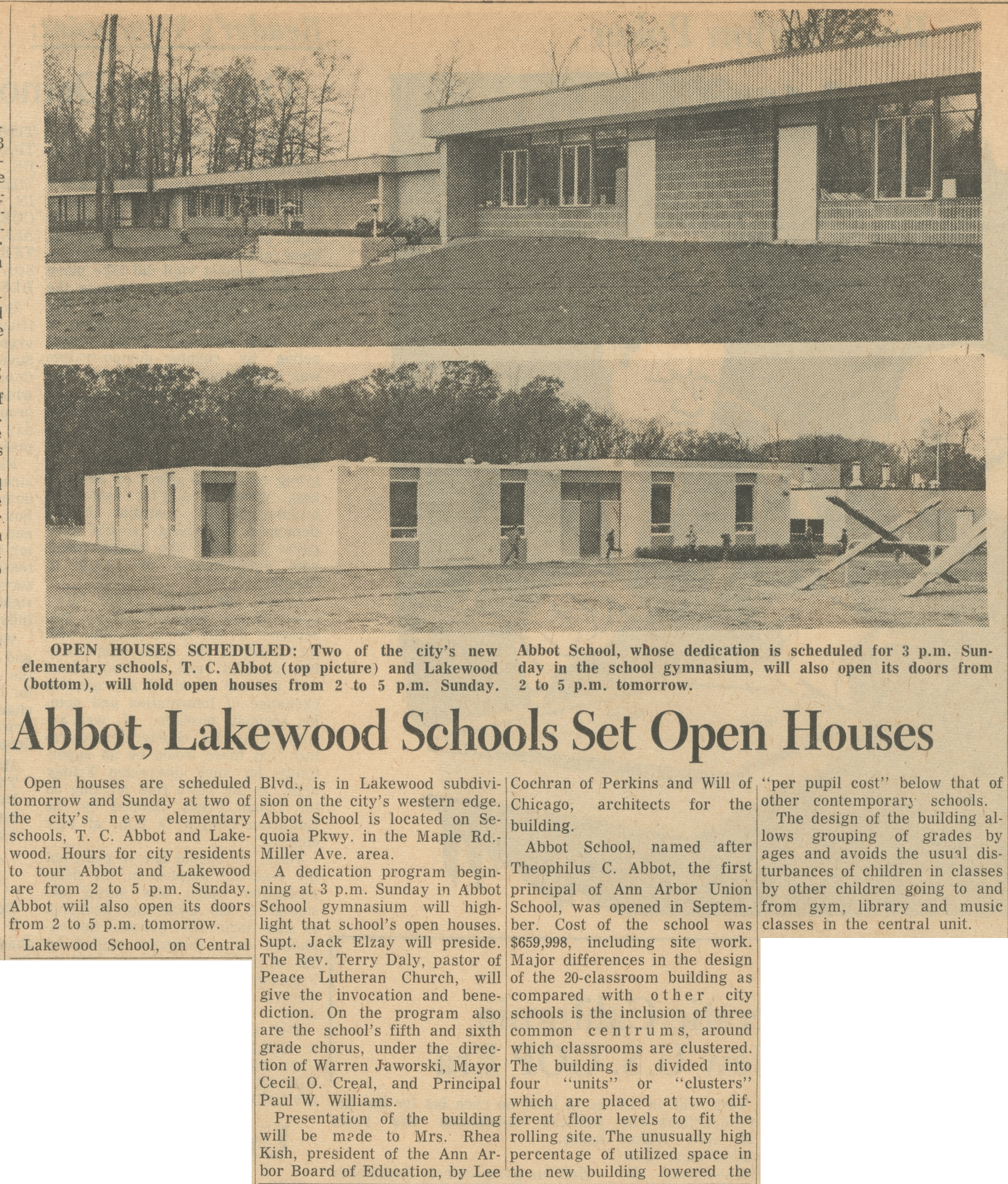 ﻿OPEN HOUSES SCHEDULED: Two of the city's new Abbot School, whose dedication is scheduled for 3 p.m. Sunelementary schools, T. C. Abbot (top picture) and Lakewood day in the school gymnasium, will also open its doors from j (bottom), will hold open houses from 2 to 5 p.m. Sunday. 2 to 5 p.m. tomorrow.<br><br>Abbot, Lakewood Schools Set Open Houses<br><br>Open houses are scheduled Blvd., is in Lakewood subdivi-1 Cochran of Perkins and Will of, "per pupil cost” below that of: tomorrow and Sunday at two of ] sion on the city’s western edge. I Chicago, architects for the other contemporary schools, the city’s new elementary ! Abbot School is located on Se- j building The des‘§n of tbe building al-<br><br>I schools, T. C. Abbot and Lake-jquoia Pkwy. in the Maple Rd.- . lows grouping of grades by<br><br>j wood. Hours for city residents! Miller Ave. area. 1 Abbot Sch001’ named alter ages and avoids the usual dis-i<br><br>j to tour Abbot and Lakewood I A dedication program begin- jTheophilus C. Abbot, the first turbances of children in classes<br><br>j are from 2 to 5 p.m. Sunday, jning at 3 p.m. Sunday in Abbot principal of Ann Arbor Union by other children going to and j Abbot will also open its doors'School gymnasium will high- School, was opened in Septem-jfrom gym, library and music from 2 to 5 p.m. tomorrow. light that school’s open houses, ber. Cost of the school was classes in the central unit,<br><br>j Lakewood School, on Central j Supt. Jack Elzay will preside. I $659,998, including site work.<br><br>'-------------------------------'The Rev. Terry Daly, pastor of I Major differences in the design I<br><br>; Peace Lutheran Church, will of the 20-classroom building as! j give the invocation and bene-1 compared with other city! diction. On the program also; schools is the inclusion of three | are the school’s fifth and sixth common centrums, around | grade chorus, under the direc-! which classrooms are clustered., j tion of Warren Jaworski, Mayor ; The building is divided into Cecil 0. Cre.al, and Principal | four "units” or “clusters”<br><br>Paul W. Williams. I which are placed at two dif-<br><br>I Presentation of the building! ferent floor levels to fit the ; will be made to Mrs. Rhea ! rolling site. The unusually high!<br><br>I Kish, president of the Ann Ar-percentage of utilized space in' bor Board of Education, by Lee the new building lowered the