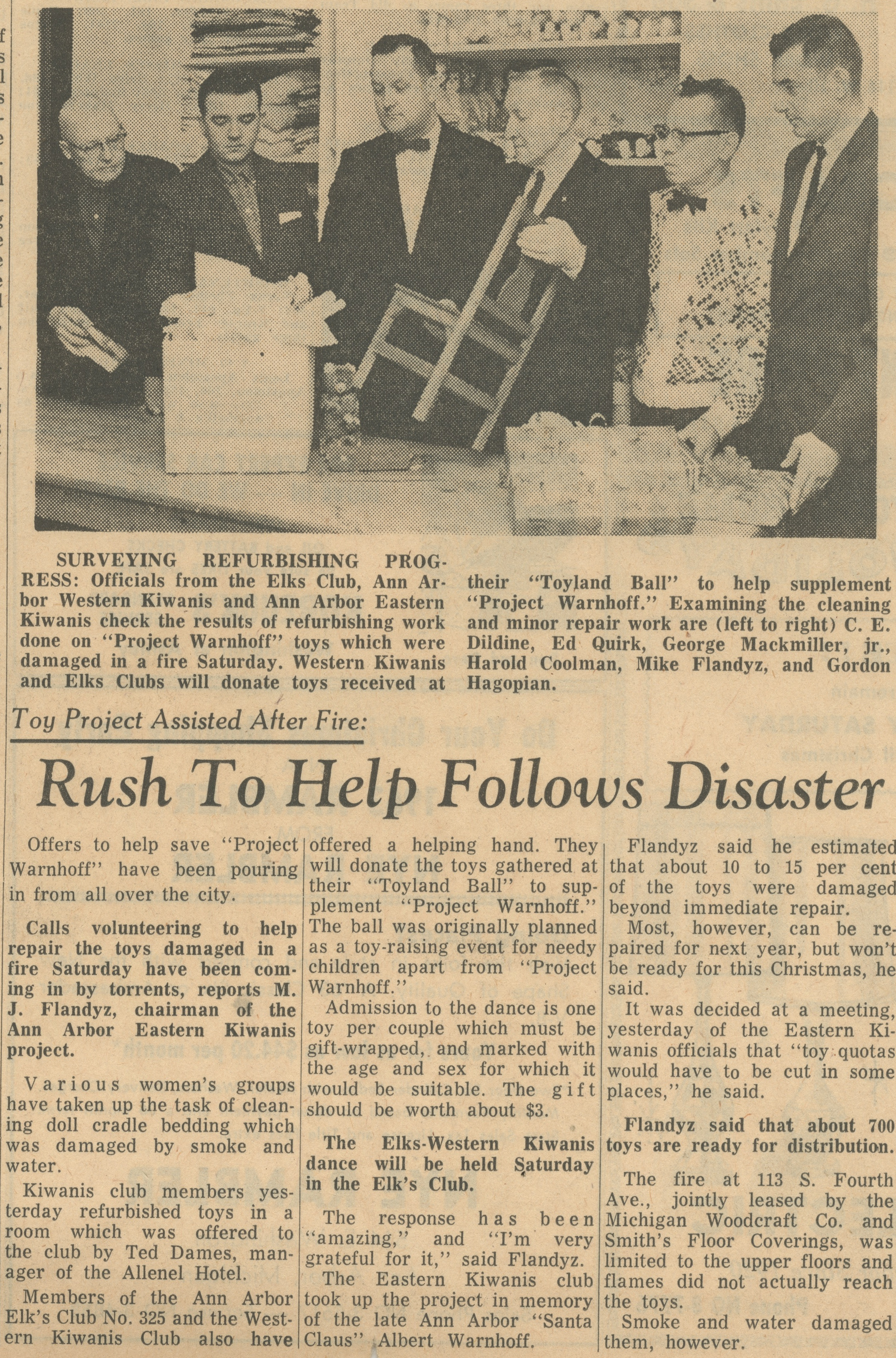 Offers to help save “Project Warnhoff” have been pouring in from all over the city.

Calls volunteering to help repair the toys damaged in a fire Saturday have been coming in by torrents, reports M. J. Flandyz, chairman of the Ann Arbor Eastern Kiwanis project.

Various women’s groups have taken up the task of cleaning doll cradle bedding which was damaged by smoke and water.

Kiwanis club members yesterday refurbished toys in a room which was offered to the club by Ted Dames, manager of the Allenel Hotel.

Members of the Ann Arbor Elk’s Club No. 325 and the Western Kiwanis Club also have

offered a helping hand. They will donate the toys gathered at their “Toyland Ball” to supplement “Project Warnhoff.” The ball was originally planned as a toy-raising event for needy children apart from "Project Warnhoff.”

Admission to the dance is one toy per couple which must be gift-wrapped, and marked with the age and sex for which it would be suitable. The gift should be worth about $3.

The Elks-Western Kiwanis dance will be held Saturday in the Elk’s Club.

The response has been “amazing,” and “I’m very grateful for it,” said Flandyz.

The Eastern Kiwanis club took up the project in memory of the late Ann Arbor “Santa Claus” Albert Warnhoff.

Flandyz said he estimated that about 10 to 15 per cent of the toys were damaged beyond immediate repair.

Most, however, can be repaired for next year, but won’t be ready for this Christmas, he said.

It was decided at a meeting, yesterday of the Eastern Kiwanis officials that “toy quotas would have to be cut in some places,” he said.

Flandyz said that about 700 toys are ready for distribution.

The fire at 113 S. Fourth Ave., jointly leased by the Michigan Woodcraft Co. and Smith’s Floor Coverings, was limited to the upper floors and flames did not actually reach the toys.

Smoke and water damaged them, however.