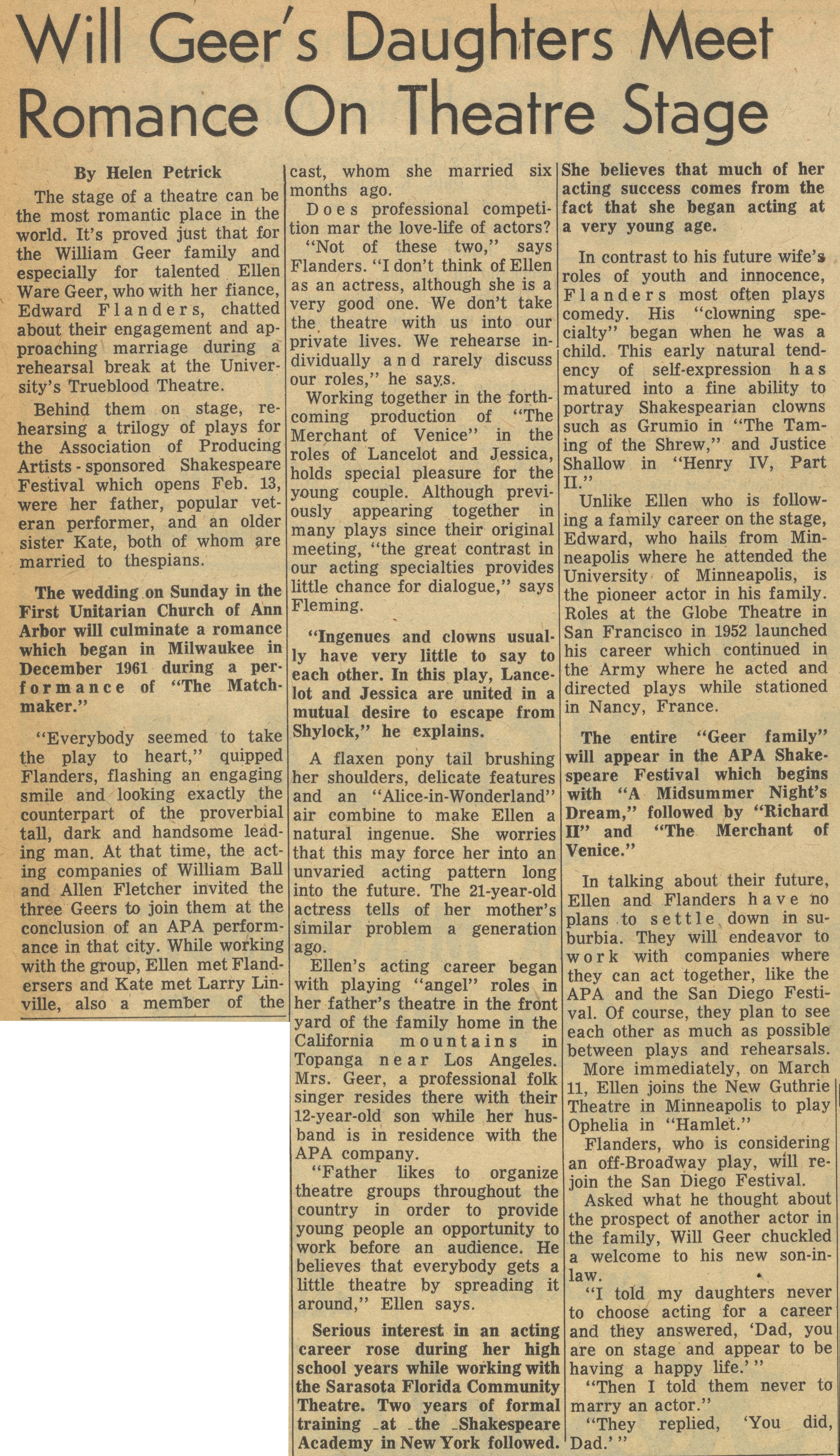 Will Geer' s Daughters Meet
Romance On Theatre Stage
By Helen Petrick cast, whom she married six She believes that much of her
The stage of a theatre can be months ago. . . acting success comes fro_m the
the most romantic place in the . D o e s professwnal compel!- fact that she began actmg at
world. It's proved just that for lion mar the love-life of actors? a very young age.
the William Geer family and "Not of these two," says . . ,
especially for talented Ellen Flanders. "I don't think of Ellen In contrast to his future wife •
Ware Geer, who with her fiance, as an actress, although she is a roles of youth and mnocence,
Ed d F I d h tt d very good one. We don't take F Ian de r s most often plays
war a n e r s, c a e . . comedy His "clownmg speabout
their enga~ement a~d ap- th~ . thea~re with us mto o_ur cialty" .began when he was a
preaching marnage durmg a P:l~ate lives. We rehear~e m- child This early natural tendrehearsal
break at the Univer- dlvidually, and rarely discuss ency . of seJi-expression has
sity's _Trueblood Theatre. 00.&~;~~~· t~ee::::·in the forth- matured into a fin~ ability to
Behmd them on stage, re- coming gpro~uction of "The portray Shakespearian clowns
hearsing a_ t~ilogy of plays ~or Merchant of Venice" in the ~uch as Grumio i,~ "The Ta_mthe
Association of Producmg roles of Lancelot and Jessica mg of the Shrew, and Justice
Artists- sponsored Shakespeare holds special pleasure for th~ Shallow in "Henry IV, Part
Festival which opens Feb. 13, young couple. Although previ- II." . .
were her father, popular vet- ously appearing together in . Unlike _Ellen who rs followe~
an performer, and an older many plays since their original mg a family caree_r on the sta~e,
stste~ Kate, both _of whom 9-re meeting "the great contrast in Edwar_d, who hails from Mmmarned
to thesptans. our acu'ng specialties provides ne~pohs_ where he_ attend~d t~e
- . , Umverstty of Mmneapohs, ts
The wedding on Sunday in the little chance for dialogue, says the pioneer actor in his family.
First Unitarian Church of Ann Flemmg. Roles at the Globe Theatre in
Ar~or will cul~inaU: a roman~e "Ingenues and clowns usual- San Francisco in 1952 launched
Which began m Mt~waukee m ly have very little to say to his career which continued in
December 1961 durmg a per- each other. In this play Lance- the Army where he acted and
form an c e of "The Match· lot and Jessica are uniied in a directed plays while stationed
maker." mutual desire to escape from in Nancy, France.
"Everybody seemed to take Shylock," he explains. The entire "Geer family"
the play to heart," quipped A flaxen pony tail brushing will appear in the APA Shake·
Flanders, flashmg an engagmg her shoulders, delicate features speare Festival which begins
smile and looking exactly the and an "Alice-in-Wonderland" with "A Midsummer Night's
counterpart of the proverbial air combine to make Ellen a Dream," followed by "Richard
tall, dark and handsome lead- natural ingenue. She worries II" and "The Merchant of
ing man. At that time, the act- that this may force her into an Venice."
ing companies of William Ball unvaried acting pattern long . .
and Allen Fletcher invited the into the future. The 21.year-old In talkmg about their future,
three Geers to join them at the actress tells of her mother's Ellen and Flanders h a v. e no
conclusion of an APA perform~ similar problem a generation plan~ to set t l_e down m suance
in that city. While working agQ. burbra. They Will endeavor to
with the group, Ellen met Fland- Ellen's acting career began work with compames. where
ersers and Kate met Larry Lin- with playing Hangel'' roles in they can act togethe_r, hke th~
ville, also a member of the her father's theatre in the front APA and the San Drego Festi-
L..:.;.;;,;,;...;;;;,;,;...;;,...,.;;.....:,=-......c~ yard of the family home in the vaL Of course, they plan to see
California m 0 u n t 8 ins in each other as much as posstble
Topanga n e a r Los Angeles. between. plays. and rehearsals.
Mrs. Geer, a professional folk More m~~edtately , on Mar~h
singer resides there with their 11, Ellen. )Oms the New Guthne
12-year-old son while her hus- Theat~e ~n ;:rmne1apo,l,ts to play
band is in residence with the Ophelia m Hamet. . .
APA company. Flanders, who IS cons1~ermg
"Father likes to organize an off-Broadway play, will retheatre
groups throughout the JOID the San Diego FestivaL
country in order to provide Asked what he thought about
young people an opportunity to the prospect of another actor m
work before an audience. He the family, Will Geer chuckled
believes that everybody gets a a welcome to h1s new son-Inlittle
~;atre by spreading it la~i told my daughte~s never I
around, Ellen says. to choose acting for a career
Serious interest in an acting and they answered, 4Dad, you
career rose during her high are on stage and appear to be
school years while working with having a happy life.'"
the Sarasota Florida Community "Then I told them never to
Theatre. Two years of formal marry an actor."
training _at _the _Shakespea~e "They replied, 'You did, Dad.'"