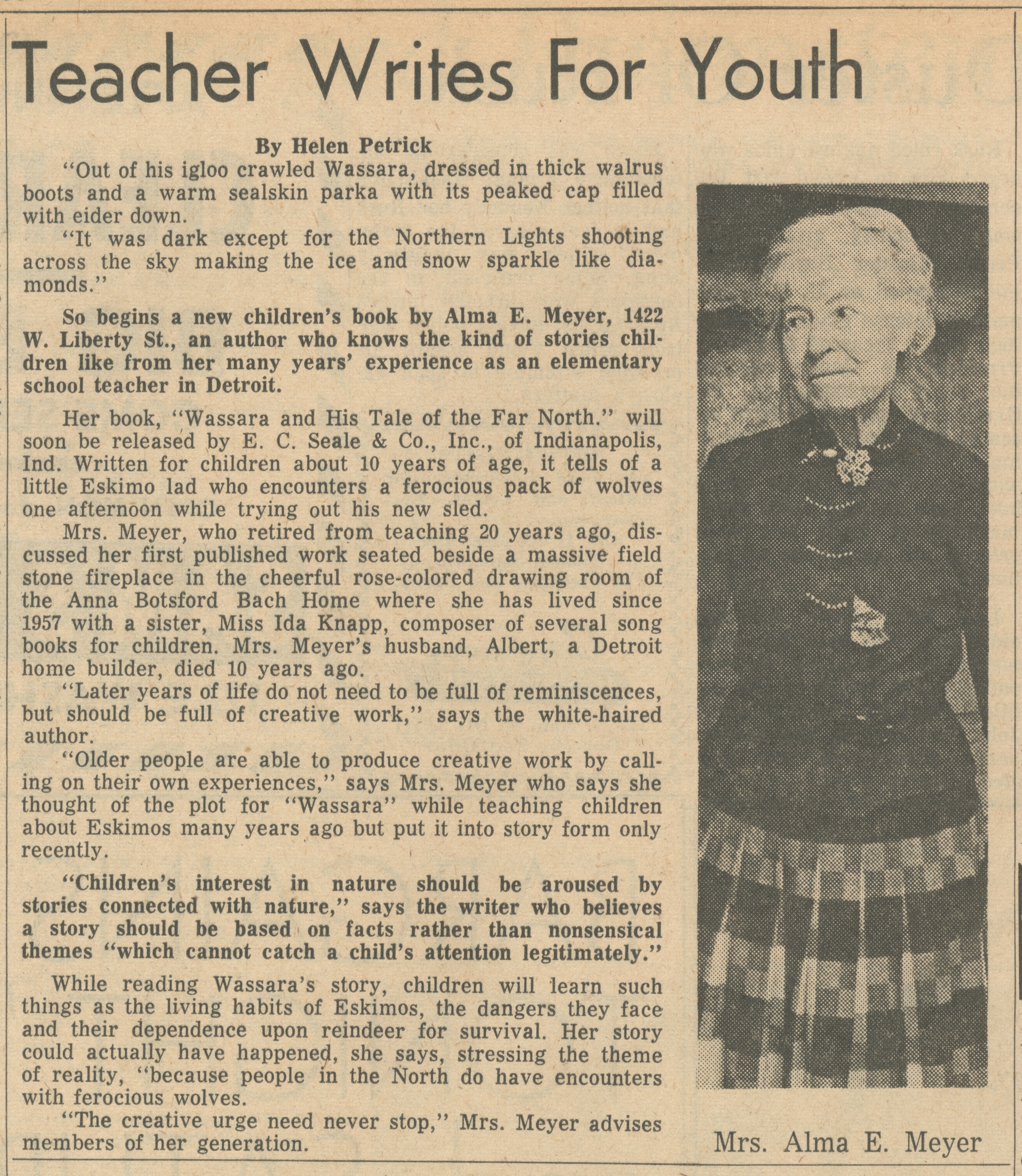 ﻿Teacher Writes For Youth<br><br>By Helen Petrick<br><br>“Out of his igloo crawled Wassara, dressed in thick walrus boots and a warm sealskin parka with its peaked cap filled with eider down.<br><br>“It was dark except for the Northern Lights shooting across the sky making the ice and snow sparkle like diamonds.”<br><br>So begins a new children’s book by Alma E. Meyer, 1422 W. Liberty St., an author who knows the kind of stories children like from her many years’ experience as an elementary school teacher in Detroit.<br><br>Her book, “Wassara and His Tale of the Far North.” will soon be released by E. C. Seale & Co., Inc., of Indianapolis, Ind. Written for children about 10 years of age, it tells of a little Eskimo lad who encounters a ferocious pack of wolves one afternoon while trying out his new sled.<br><br>Mrs. Meyer, who retired from teaching 20 years ago, discussed her first published work seated beside a massive field stone fireplace in the cheerful rose-colored drawing room of the Anna Botsford Bach Home where she has lived since 1957 with a sister, Miss Ida Knapp, composer of several song books for children. Mrs. Meyer’s husband, Albert, a Detroit home builder, died 10 years ago.<br><br>“Later years of life do not need to be full of reminiscences, but should be full of creative work,” says the white-haired author.<br><br>“Older people are able to produce creative work by calling on their own experiences,” says Mrs. Meyer who says she thought of the plot for “Wassara” while teaching children about Eskimos many years ago but put it into story form only recently.<br><br>“Children’s interest in nature should be aroused by stories connected with nature,” says the writer who believes a story should be based on facts rather than nonsensical themes “which cannot catch a child’s attention legitimately.”<br><br>While reading Wassara’s story, children will learn such things as the living habits of Eskimos, the dangers they face and their dependence upon reindeer for survival. Her story could actually have happened, she says, stressing the theme of reality, “because people in the North do have encounters with ferocious wolves.<br><br>“The creative urge need never stop,” Mrs. Meyer advises members of her generation.<br><br>Mrs. Alma E. Meyer