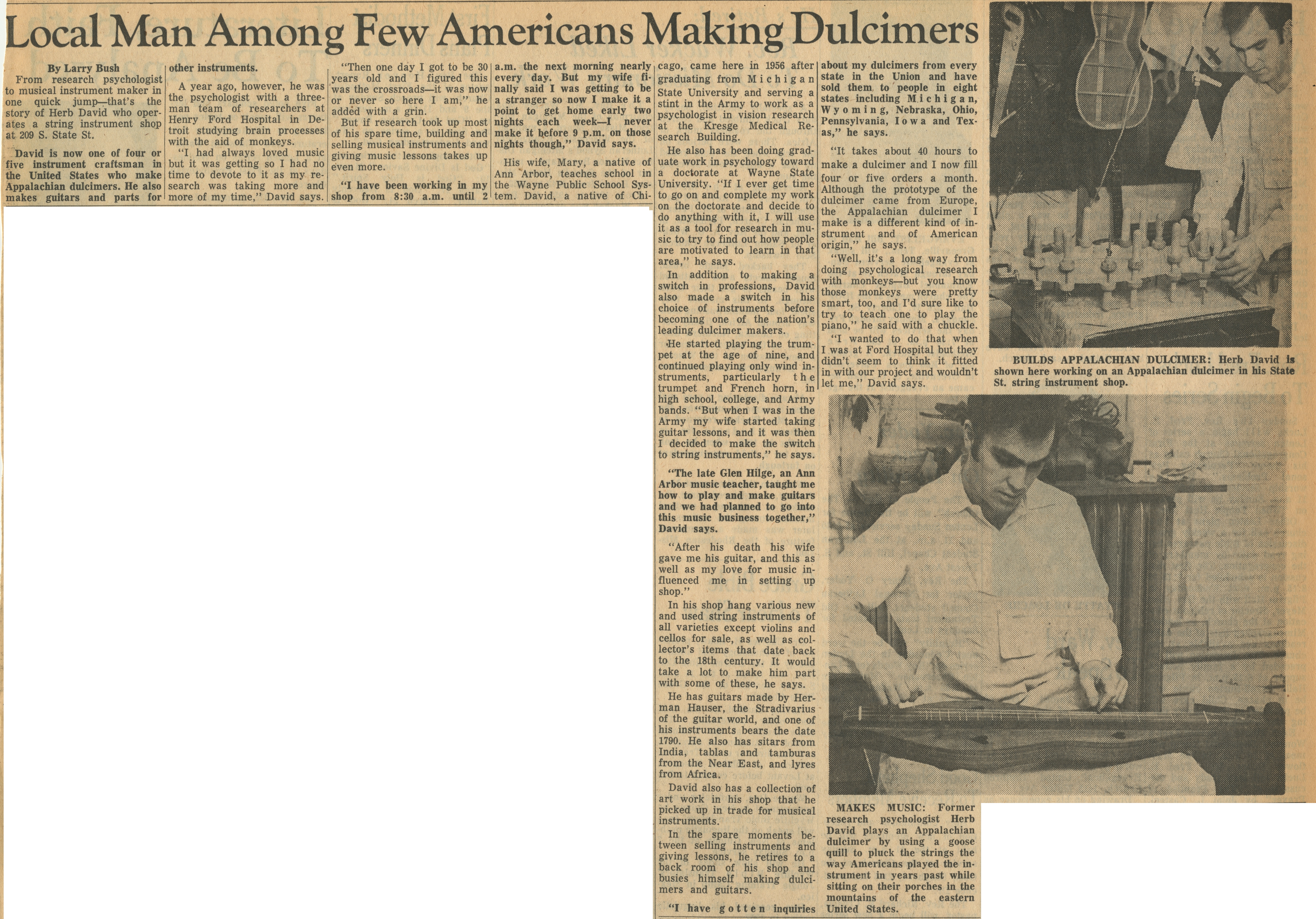 From research psychologist to musical instrument maker in one quick jump—that's the story of Herb David who operates a string instrument shop at 209 S. State St.

David is now one of four or five instrument craftsman in the United States who make Appalachian dulcimers. He also makes guitars and parts for other instruments.

A year ago, however, he was the psychologist with a three-man team of researchers at Henry Ford Hospital in Detroit studying brain processes with the aid of monkeys.

“I had always loved music but it was getting so I had no time to devote to it as my research was taking more and more of my time,” David says.

“Then one day I got to be 30 years old and I figured this was the crossroads—it was now or never so here I am,” he added with a grin.

But if research took up most of his spare time, building and selling musical instruments and giving music lessons takes up even more.

"I have been working in my shop from 8:30 a.m. until 2 a.m.  the next morning nearly every day. But my wife finally said I was getting to be a stranger so now I make it a point to get home early two nights each week—I never make it before 9 p.m. on those nights though,” David says.

His wife, Mary, a native of Ann Arbor, teaches school in the Wayne Public School System. David, a native of Chicago, came here in 1956 after graduating from Michigan State University and serving a stint in the Army to work as a psychologist in vision research at the Kresge Medical Research Building.

He also has been doing graduate work in psychology toward a doctorate at Wayne State University. “If I ever get time to go on and complete my work on the doctorate and decide to do anything with it, I will use it as a tool for research in music to try to find out how people are motivated to learn in that area,” he says.

In addition to making a switch in professions, David also made a switch in his choice of instruments before becoming one of the nation’s leading dulcimer makers.

He started playing the trumpet at the age of nine, and continued playing only wind instruments, particularly the trumpet and French horn, in high school, college, and Army bands. “But when I was in the Army my wife started taking guitar lessons, and it was then I decided to make the switch to string instruments,” he says.

“The late Glen Hilge, an Ann Arbor music teacher, taught me how to play and make guitars and we had planned to go into this music business together,” David says.

“After his death his wife gave me his guitar, and this as well as my love for music influenced me in setting up shop.”

In his shop hang various new and used string instruments of all varieties except violins and cellos for sale, as well as collector’s items that date back to the 18th century. It would take a lot to make him part with some of these, he says.

He has guitars made by Herman Hauser, the Stradivarius of the guitar world, and one of his instruments bears the date 1790. He also has sitars from India, tablas and tamburas from the Near East, and lyres from Africa.

David also has a collection of art work in his shop that he picked up in trade for musical instruments.

In the spare moments between selling instruments and giving lessons, he retires to a back room of this shop and busies himself making dulcimers and guitars.

"I have gotten inquiries about my dulcimers from every state in the Union and have sold them to people in eight states including Michigan, Wyoming, Nebraska, Ohio, Pennsylvania, Iowa and Texas,” he says.

“It takes about 40 hours to make a dulcimer and I now fill four or five orders a month. Although the prototype of the dulcimer came from Europe, the Appalachian dulcimer I make is a different kind of instrument and of American origin,” he says.

“Well, it’s a long way from doing psychological research with monkeys—but you know those monkeys were pretty smart, too, and I’d sure like to try to teach one to play the piano,” he said with a chuckle.

“I wanted to do that when I was at Ford Hospital but they didn’t seem to think it fitted in with our project and wouldn’t let me," David says.

MAKES MUSIC: Former research psychologist Herb David plays an Appalachian dulcimer by using a goose quill to pluck the strings the way Americans played the instrument in years past while sitting on their porches in the mountains of the eastern United States.