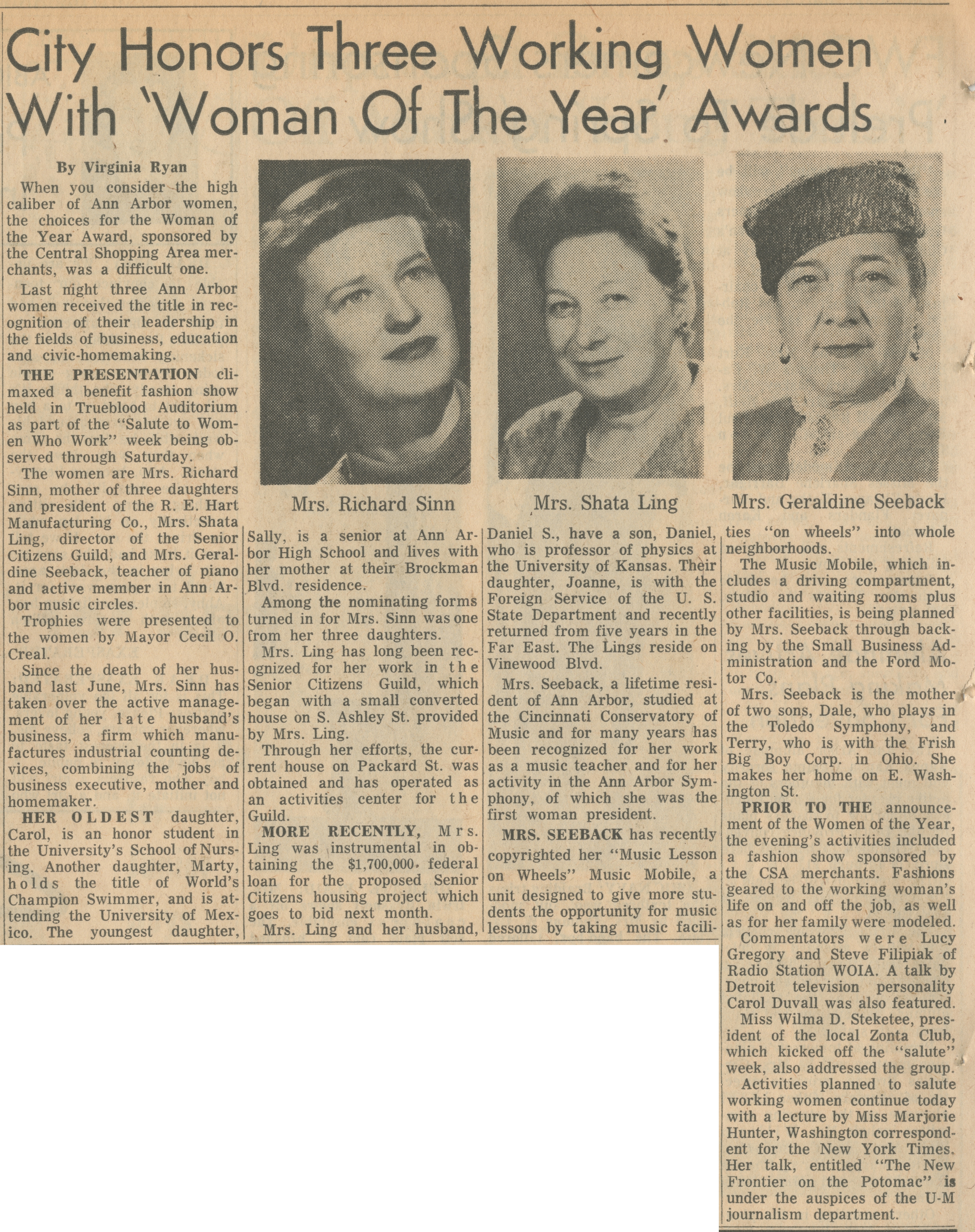 When you consider the high caliber of Ann Arbor women, the choices for the Woman of the Year Award, sponsored by the Central Shopping Area merchants, was a difficult one.

Last right three Ann Arbor women received the title in recognition of their leadership in the fields of business, education and civic-homemaking.

THE PRESENTATION climaxed a benefit fashion show held in Trueblood Auditorium as part of the “Salute to Women Who Work” week being observed through Saturday.

Trophies were presented to the women by Mayor Cecil O. Creal.

Since the death of her husband last June, Mrs. Sinn has taken over the active management of her late husband’s business, a firm which manufactures industrial counting devices, combining the jobs of business executive, mother and homemaker.

HER OLDEST daughter, Carol, is an honor student in the University’s School of Nursing. Another daughter, Marty, holds the title of World’s Champion Swimmer, and is attending the University of Mexico. The youngest daughter, Sally, is a senior at Ann Arbor High School and lives with her mother at their Brockman Blvd. residence.

Among the nominating forms turned in for Mrs. Sinn was one from her three daughters.

Mrs. Ling has long been recognized for her work in the Senior Citizens Guild, which began with a small converted house on S. Ashley St. provided by Mrs. Ling.

Through her efforts, the current house on Packard St. was obtained and has operated as an activities center for the Guild.

MORE RECENTLY, Mrs. Ling was instrumental in obtaining the $1,700,000 federal loan for the proposed Senior Citizens housing project which goes to bid next month.

Mrs. Ling and her husband, Daniel S., have a son, Daniel, who is professor of physics at the University of Kansas. Their daughter, Joanne, is with the Foreign Service of the U. S. State Department and recently returned from five years in the Far East. The Lings reside on Vinewood Blvd.

Mrs. Seeback, a lifetime resident of Ann Arbor, studied at the Cincinnati Conservatory of Music and for many years has been recognized for her work as a music teacher and for her activity in the Ann Arbor Symphony, of which she was the first woman president.

MRS. SEEBACK has recently copyrighted her “Music Lesson on Wheels” Music Mobile, a unit designed to give more students the opportunity for music lessons by taking music facilities “on wheels” into whole neighborhoods.

The Music Mobile, which includes a driving compartment, studio and waiting rooms plus other facilities, is being planned by Mrs. Seeback through backing by the Small Business Administration and the Ford Motor Co.

Mrs. Seeback is the mother of two sons, Dale, who plays in the Toledo Symphony, land Terry, who is with the Frish Big Boy Corp. in Ohio. She makes her home on E. Washington St.

PRIOR TO THE announcement of the Women of the Year, the evening’s activities included a fashion show sponsored by the CSA merchants. Fashions geared to the working woman’s life on and off the job, as well as for her family were modeled.

Miss Wilma D. Steketee, president of the local Zonta Club, which kicked off the “salute” week, also addressed the group.

Activities planned to salute working women continue today with a lecture by Miss Marjorie Hunter, Washington correspondent for the New York Times. Her talk, entitled “The New Frontier on the Potomac” is under the auspices of the U-M journalism department.