Beach Is Popular At Whitmore Lake 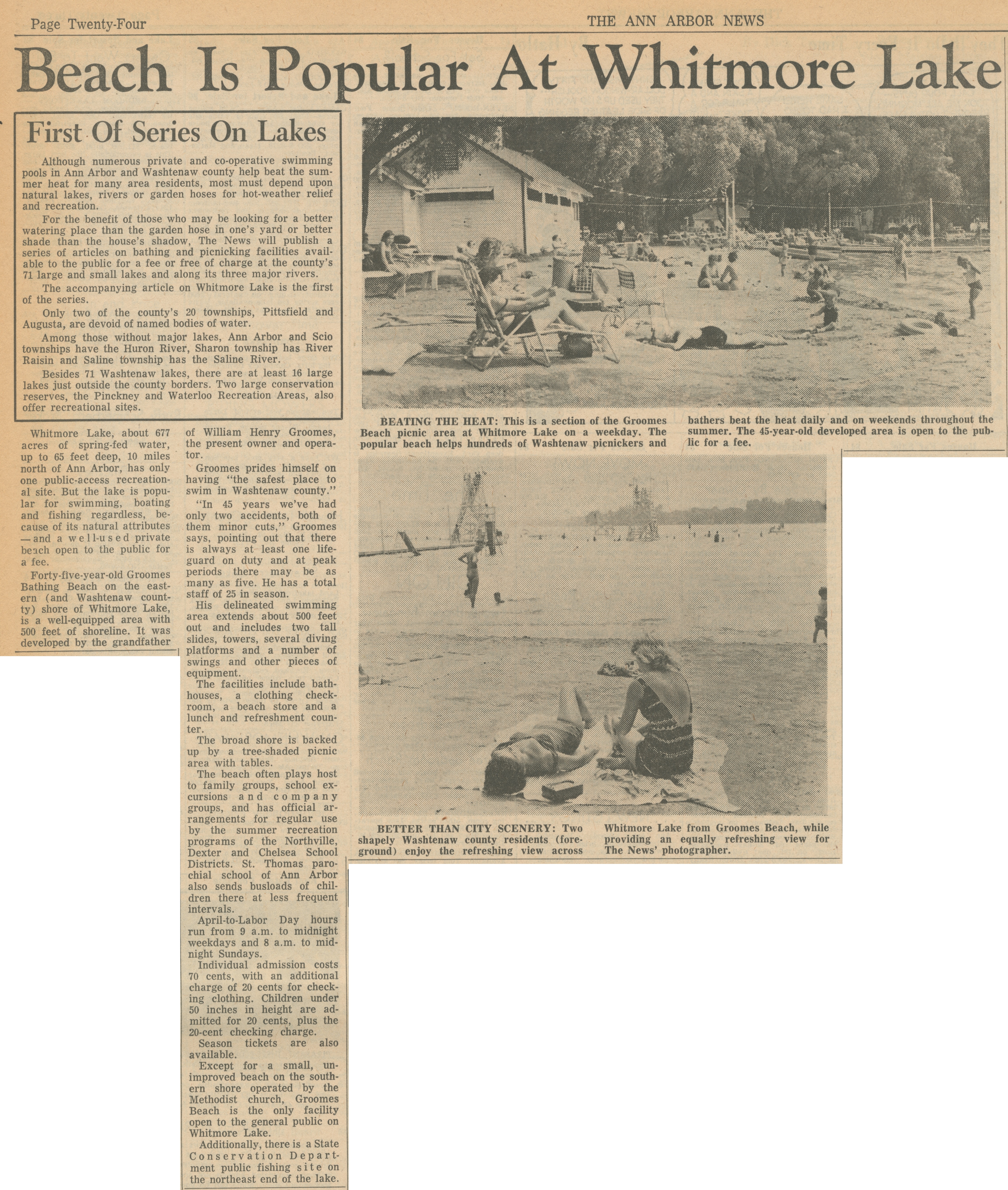 ﻿Beach Is Popular At Whitmore Lake

First Of Series On Lakes

Although numerous private and co-operative swimming pools in Ann Arbor and Washtenaw county help beat the summer heat for many area residents, most must depend upon natural lakes, rivers or garden hoses for hot-weather relief and recreation.

For the benefit of those who may be looking for a better watering place than the garden hose in one’s yard or better shade than the house’s shadow, The News will publish a series of articles on bathing and picnicking facilities available to the public for a fee or free of charge at the county’s 71 large and small lakes and along its three major rivers.

The accompanying article on Whitmore Lake is the first of the series.

Only two of the county’s 20 townships, Pittsfield and Augusta, are devoid of named bodies of water.

Among those without major lakes, Ann Arbor and Scio townships have the Huron River, Sharon township has River Raisin and Saline township has the Saline River.

Whitmore Lake, about 677 acres of spring-fed water, up to 65 feet deep, 10 miles north of Ann Arbor, has only one public-access recreational site. But the lake is popular for swimming, boating and fishing regardless, because of its natural attributes — and a well-used private beach open to the public for a fee.

Forty-five-year-old Groomes Bathing Beach on the eastern (and Washtenaw county) shore of Whitmore Lake, is a well-equipped area with 500 feet of shoreline. It was developed by the grandfather of William Henry Groomes, the present owner and operator.

Groomes prides himself on having “the safest place to swim in Washtenaw county.”

“In 45 years we’ve had only two accidents, both of them minor cuts,” Groomes says, pointing out that there is always at least one lifeguard on duty and at peak periods there may be as many as five. He has a total staff of 25 in season.

His delineated swimming area extends about 500 feet out and includes two tall slides, towers, several diving platforms and a number of swings and other pieces of equipment.

The facilities include bathhouses, a clothing checkroom, a beach store and a lunch and refreshment counter.

The broad shore is backed up by a tree-shaded picnic area with tables.

The beach often plays host to family groups, school excursions and company groups, and has official arrangements for regular use by the summer recreation programs of the Northville, Dexter and Chelsea School Districts. St. Thomas parochial school of Ann Arbor also sends busloads of children there at less frequent intervals.

Individual admission costs 70 cents, with an additional charge of 20 cents for checking clothing. Children under 50 inches in height are admitted for 20 cents, plus the 20-cent checking charge.

Except for a small, unimproved beach on the southern shore operated by the Methodist church, Groomes Beach is the only facility open to the general public on Whitmore Lake.

Additionally, there is a State Conservation Department public fishing site on the northeast end of the lake.

BEATING THE HEAT: This is a section of the Groomes picnic area at Whitmore Lake on a weekday. The popular beach helps hundreds of Washtenaw picnickers and bathers beat the heat daily and on weekends throughout the summer.  The 45-year-old developed area is open to the public for a fee.

Bonanza new home in prior:…

Bonanza new home in prior: looking for new home at the new position is really a toughest procedure. But as you are moving at the new city then look for your new place in improve to help make your moving comfortable and also it does not cost extra till you get a home with greater culture. Inexpensive and Best Packers and Movers will going to help you out and provide you the warehousing support without asking to get more costs to you.