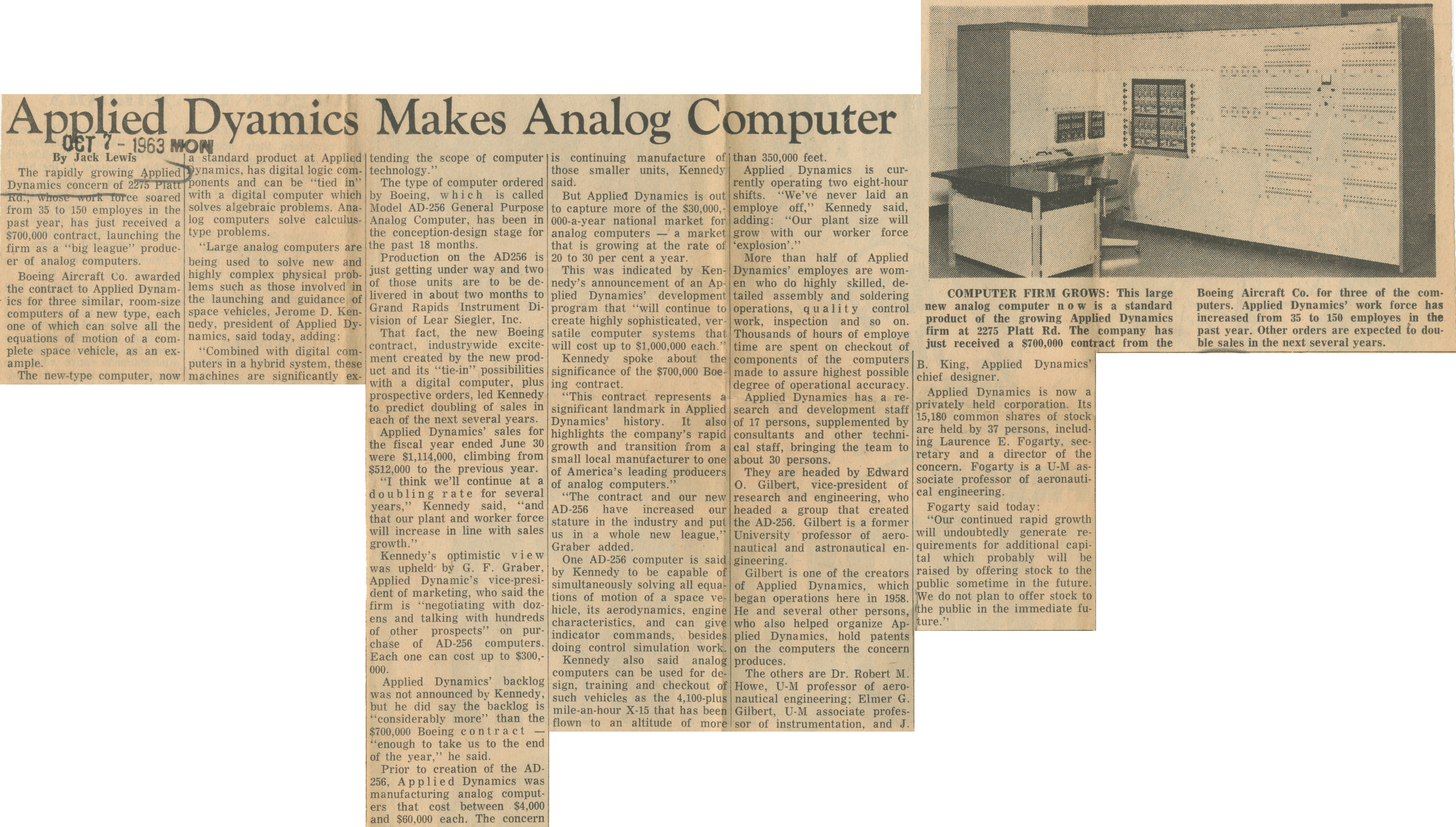 The rapidly growing Applied Dynamics concern of 2275 Platt Road whose workforce soared
from 35 to 150 employees in the past year, has just received a $700,000 contract, launching the firm as a "big league” producer of analog computers.

Boeing Aircraft Co. awarded the contract to Applied Dynamics for three similar, room-size computers of a new type, each one of which can solve all the equations of motion of a complete space vehicle, as an example.

The new-type computer, now a standard product at Applied dynamics, has digital logic components and can be “tied in" with a digital computer which solves algebraic problems. Analog computers solve calculus-type problems.

"Combined with digital computers in a hybrid system, these machines are significantly extending the scope of computer technology.”

The type of computer ordered by Boeing, which is called Model AD-256 General Purpose Analog Computer, has been in the conception-design stage for the past 18 months.

Production on the AD256 is just getting under way and two of those units are to be delivered in about two months to Grand Rapids Instrument Division of Lear Siegler, Inc.

That fact, the new Boeing contract, industrywide excitement created by the new product and its “tie-in" possibilities with a digital computer, plus prospective orders, led Kennedy to predict doubling of sales in each of the next several years.

“I think we’ll continue at a doubling rate for several years,” Kennedy said, "and that our plant and worker force will increase in line with sales growth.”

Kennedy's optimistic view was upheld by G. F. Graber. Applied Dynamic's vice-president of marketing, who said the firm is "negotiating with dozens and talking with hundreds of other prospects” on purchase of AD-256 computers. Each one can cost up to $300,000.

Applied Dynamics’ backlog was not announced by Kennedy, but he did say the backlog is “considerably more” than the $700,000 Boeing contract — "enough to take us to the end of the year,” he said.

Prior to creation of the AD-256. Applied Dynamics was manufacturing analog computers that cost between $4,000 and $60,000 each. The concern is continuing manufacture of those smaller units, Kennedy said.

But Applied Dynamics is out to capture more of the $30,000,000-a-year national market for analog computers — a market that is growing at the rate of 20 to 30 per cent a year.

This was indicated by Kennedy’s announcement of an Applied Dynamics’ development program that “will continue to create highly sophisticated, versatile computer systems that will cost up to $1,000,000 each.

Kennedy spoke about the significance of the $700,000 Boeing contract.

"This contract represents a significant landmark in Applied Dynamics’ history. It also highlights the company's rapid growth and transition from a small local manufacturer to one of America’s leading producers of analog computers.”

“The contract and our new AD-256 have increased stature in the industry and put us in a whole new league," Graber added.

One AD-256 computer is said by Kennedy to be capable of simultaneously solving all equations of motion of a space vehicle, its aerodynamics, engine characteristics, and can give indicator commands, besides doing control simulation work.

Kennedy also said analog computers can be used for design, training, and checkout of such vehicles as the 4,100-plus mile-an-hour X-15 that has been flown to an altitude of more than 350,000 feet.

More than half of Applied Dynamics’ employees are women who do highly skilled, detailed assembly and soldering operations, quality control work, inspection and so on. Thousands of hours of employee time are spent on checkout of components of the computers made to assure highest possible degree of operational accuracy.

Applied Dynamics has a research and development staff of 17 persons, supplemented by consultants and other technical staff, bringing the team to about 30 persons.

They are headed by Edward O. Gilbert, vice-president of research and engineering, who headed a group that created the AD-256. Gilbert is a former University professor of aeronautical and astronautical engineering.

Gilbert is one of the creators of Applied Dynamics, which began operations here in 1958. He and several other persons, who also helped organize Applied Dynamics, hold patents on the computers the concern produces.

COMPUTER FIRM GROWS: This large new analog computer now is a standard product of the growing Applied Dynamics firm at 2275 Platt Rd. The company has just received a $700,000 contract from the Boeing Aircraft Co. for three of the computers. Applied Dynamics’ work force has increased from 35 to 150 employees in the past year. Other orders are expected fo double sales in the next several years.

Applied Dynamics is now a privately held corporation. Its 15,180 common shares of stock are held by 37 persons, including Laurence E. Fogarty, secretary and a director of the concern. Fogarty is a U-M associate professor of aeronautical engineering.