Series With Spartans Coming Up: Puckmen Still On Fling 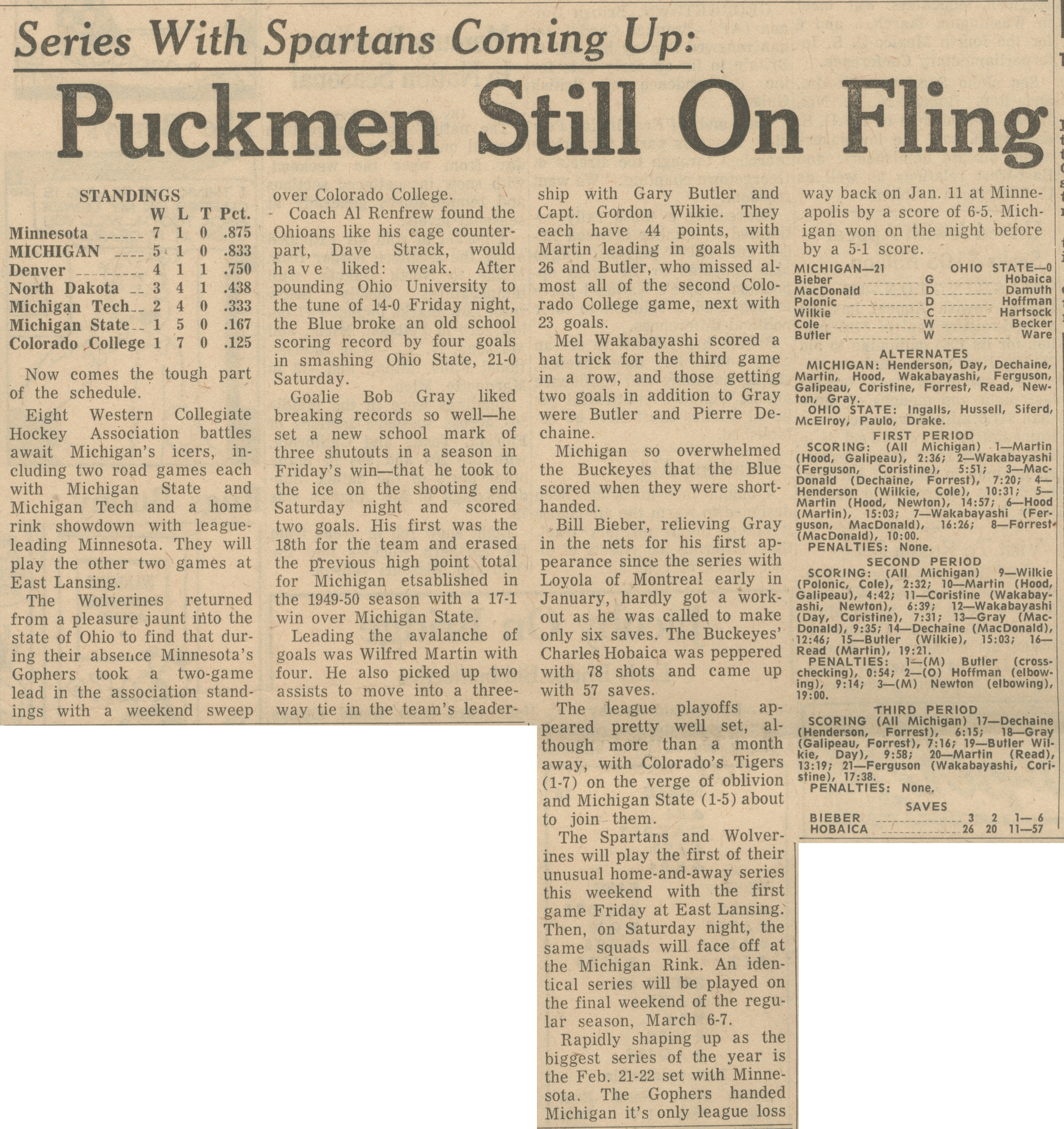 ﻿Series With Spartans Coming Up:

Now comes the tough part of the schedule.

Eight Western Collegiate Hockey Association battles await Michigan's icers, including two road games each with Michigan State and Michigan Tech and a home rink showdown with league leading Minnesota. They will play the other two games at East Lansing.

The Wolverines returned from a pleasure jaunt into the state of Ohio to find that during their absence Minnesota’s Gophers took a two-game lead in the association standings with a weekend sweep over Colorado College.

Coach Al Renfrew found the Ohioans like his cage counterpart, Dave Strack, would have liked: weak. After pounding Ohio University to the tune of 14-0 Friday night, the Blue broke an old school scoring record by four goals in smashing Ohio State, 21-0 Saturday.

Goalie Bob Gray liked breaking records so well—he set a new school mark of three shutouts in a season in Friday’s win—that he took to the ice on the shooting end Saturday night and scored two goals. His first was the 18th for the team and erased the previous high point total for Michigan established in the 1949-50 season with a 17-1 win over Michigan State.

Leading the avalanche of goals was Wilfred Martin with four. He also picked up two assists to move into a three-way tie in the team’s leadership with Gary Butler and Capt. Gordon Wilkie. They each have 44 points, with Martin leading in goals with 26 and Butler, who missed almost all of the second Colorado College game, next with 23 goals.

Mel Wakabayashi scored a hat trick for the third game in a row, and those getting two goals in addition to Gray were Butler and Pierre Dechaine.

Michigan so overwhelmed the Buckeyes that the Blue scored when they were shorthanded.

Bill Bieber, relieving Gray in the nets for his first appearance since the series with Loyola of Montreal early in January, hardly got a workout as he was called to make only six saves. The Buckeyes' Charles Hobaica was peppered with 78 shots and came up with 57 saves.

The league playoffs appeared pretty well set, although more than a month away, with Colorado’s Tigers (1-7) on the verge of oblivion and Michigan State (1-5) about to join them.

The Spartans and Wolverines will play the first of their unusual home-and-away series this weekend with the first game Friday at East Lansing. Then, on Saturday night, the same squads will face off at the Michigan Rink. An identical series will be played on the final weekend of the regular season, March 6-7.

Rapidly shaping up as the biggest series of the year is the Feb. 21-22 set with Minnesota. The Gophers handed Michigan it’s only league loss way back on Jan. 11 at Minneapolis by a score of 6-5. Michigan won on the night before by a 5-1 score.