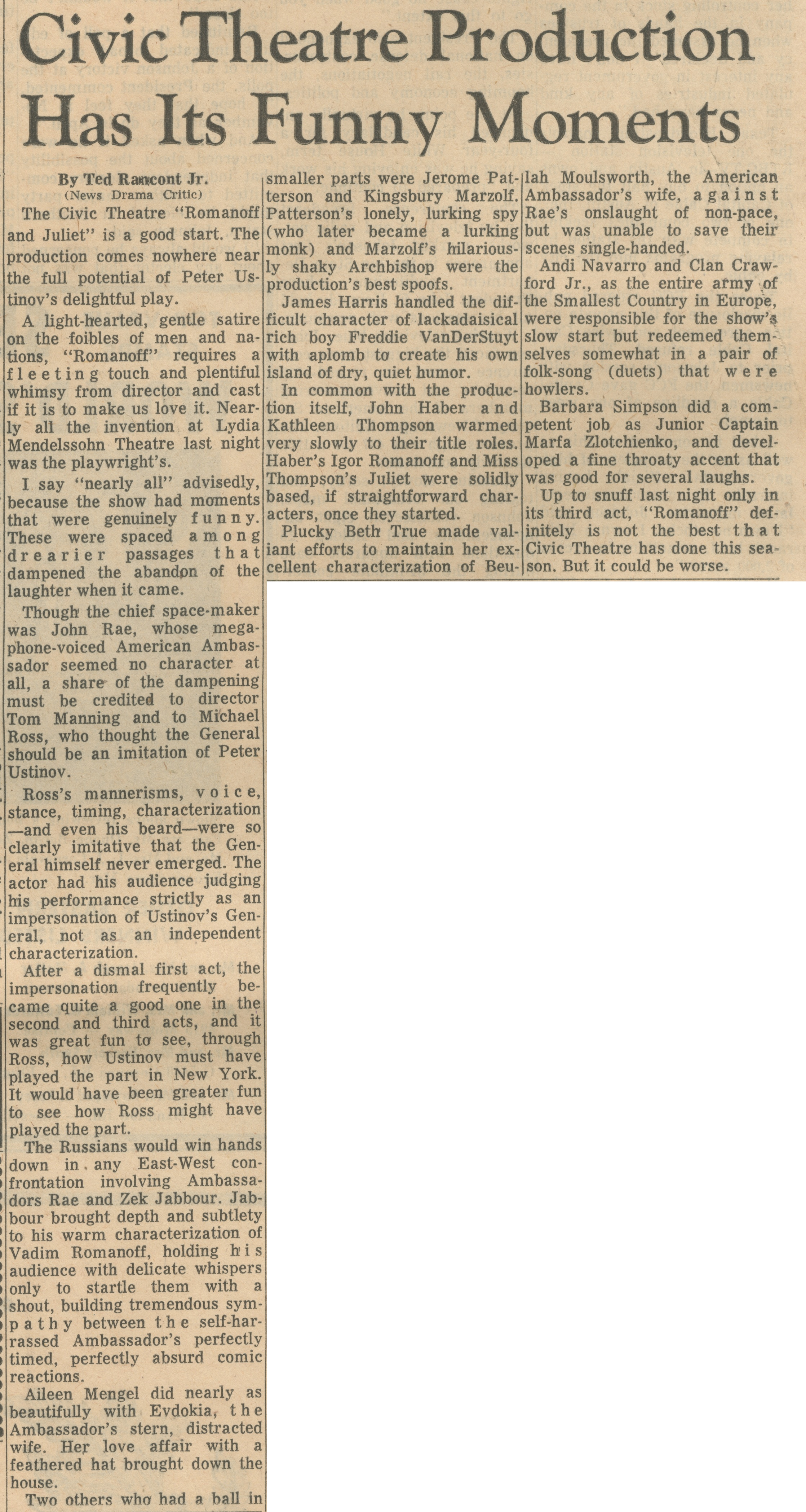 The Civic Theatre “Romanoff and Juliet” is a good start. The production comes nowhere near the full potential of Peter Ustinov’s delightful play.

A light-hearted, gentle satire on the foibles of men and nations, “Romanoff” requires a fleeting touch and plentiful whimsy from director and cast if it is to make us love it. Nearly all the invention at Lydia Mendelssohn Theatre last night was the playwright’s.

I say “nearly all” advisedly, because the show had moments that were genuinely funny. These were spaced among drearier passages that dampened the abandon of the laughter when it came.

Though the chief space-maker was John Rae, whose megaphone-voiced American Ambassador seemed no character at all, a share of the dampening must be credited to director Tom Manning and to Michael Ross, who thought the General should be an imitation of Peter Ustinov.

Ross’s mannerisms, voice, stance, timing, characterization —and even his beard—were so clearly imitative that the General himself never emerged. The actor had his audience judging his performance strictly as an impersonation of Ustinov’s General, not as an independent characterization.

The Russians would win hands down in . any East-West confrontation involving Ambassadors Rae and Zek Jabbour. Jabbour brought depth and subtlety to his warm characterization of Vadim Romanoff, holding his audience with delicate whispers only to startle them with a shout, building tremendous sympathy between the self-harassed Ambassador’s perfectly timed, perfectly absurd comic reactions.

Aileen Mengel did nearly as beautifully with Evdokia, the Ambassador’s stern, distracted wife. Her love affair with a feathered hat brought down the house.

Two others who had a ball in smaller parts were Jerome Patterson and Kingsbury Marzolf. Patterson’s lonely, lurking spy (who later became a lurking monk) and Marzolf’s hilariously shaky Archbishop were the production’s best spoofs.

James Harris handled the difficult character of lackadaisical rich boy Freddie VanDerStuyt with aplomb to create his own island of dry, quiet humor.

In common with the production itself, John Haber and Kathleen Thompson warmed very slowly to their title roles. Haber’s Igor Romanoff and Miss Thompson’s Juliet were solidly based, if straightforward characters, once they started.

Plucky Beth True made valiant efforts to maintain her excellent characterization of Beulah Moulsworth, the American Ambassador’s wife, against Rae’s onslaught of non-pace, but was unable to save their scenes single-handed.

Andi Navarro and Clan Crawford Jr., as the entire army of the Smallest Country in Europe, were responsible for the show’s slow start but redeemed themselves somewhat in a pair of folk-song (duets) that were howlers.

Barbara Simpson did a competent job as Junior Captain Marfa Zlotchienko, and developed a fine throaty accent that was good for several laughs.

Up to snuff last night only in its third act, “Romanoff” definitely is not the best that Civic Theatre has done this season. But it could be worse.