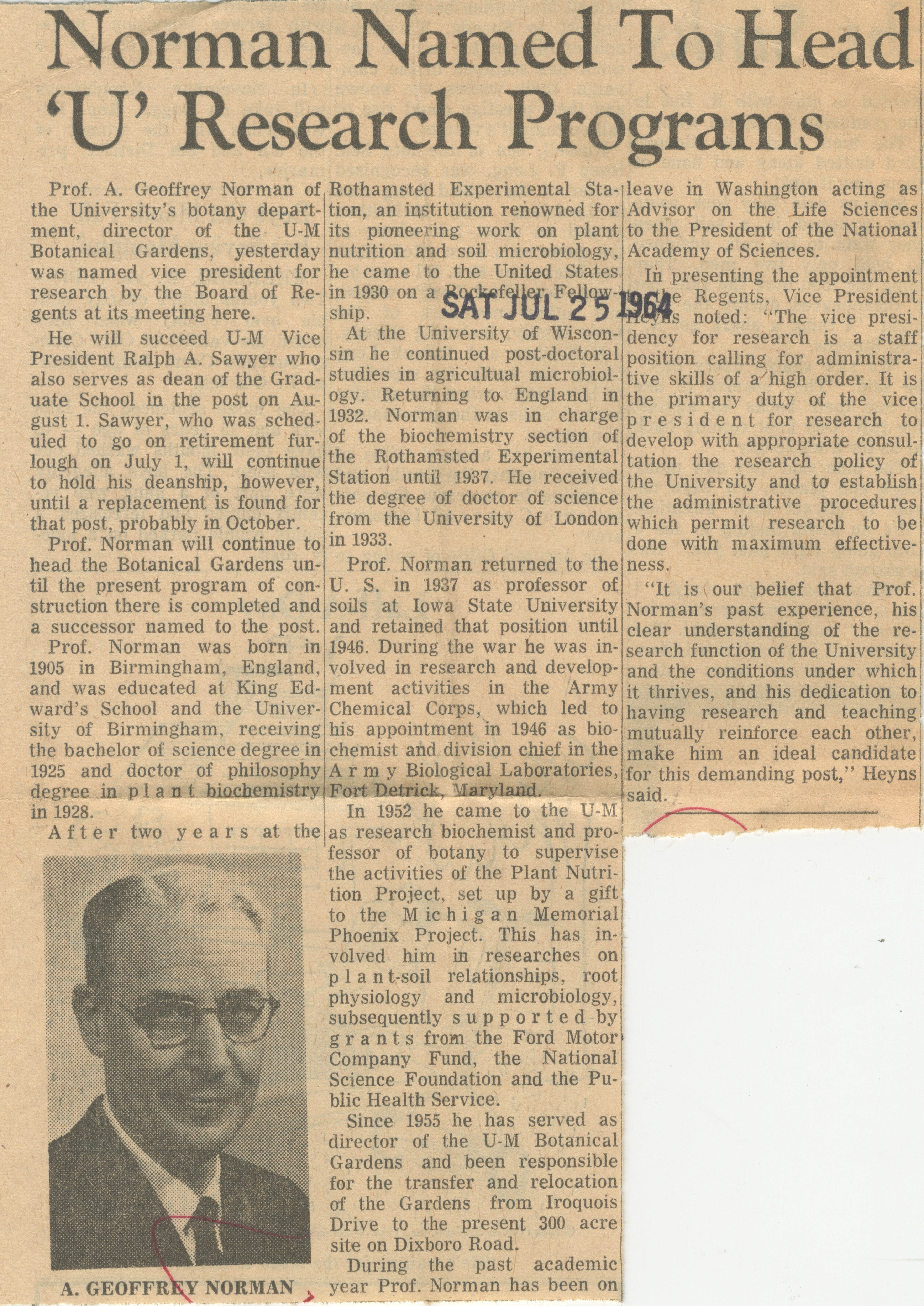 Prof. A. Geoffrey Norman of the University’s botany department, director of the U-M Botanical Gardens, yesterday was named vice president for research by the Board of Regents at its meeting here.

He will succeed U-M Vice President Ralph A. Sawyer who also serves as dean of the Graduate School in the post on August 1. Sawyer, who was scheduled to go on retirement furlough on July 1, will continue to hold his deanship, however, until a replacement is found for that post, probably in October.

Prof. Norman will continue to head the Botanical Gardens until the present program of construction there is completed and a successor named to the post.

Prof. Norman was born in 1905 in Birmingham, England, and was educated at King Edward’s School and the University of Birmingham, receiving the bachelor of science degree in 1925 and doctor of philosophy degree in plant biochemistry in 1928.

After two years at the Rothamsted Experimental Station, an institution renowned for its pioneering work on plant nutrition and soil microbiology, he came to the United States in 1930 on a ship, on a Rockefeller Fellowship.

At the University of Wisconsin he continued post-doctoral studies in agricultural microbiology. Returning to England in 1932. Norman was in charge of the biochemistry section of the Rothamsted Experimental Station until 1937. He received the degree of doctor of science from the University of London in 1933.

Prof. Norman returned to the U. S. in 1937 as professor of soils at Iowa State University and retained that position until 1946. During the war he was involved in research and development activities in the Army Chemical Corps, which led to his appointment in 1946 as biochemist and division chief in the Army Biological Laboratories, in Fort Detrick, Maryland.

In 1952 he came to the U-M as research biochemist and professor of botany to supervise the activities of the Plant Nutrition Project, set up by a gift to the Michigan Memorial Phoenix Project. This has involved him in researches on plant-soil relationships, root physiology and microbiology, subsequently supported by grants from the Ford Motor Company Fund, the National Science Foundation, and the Public Health Service.

Since 1955 he has served as director of the U-M Botanical Gardens and been responsible for the transfer and relocation of the Gardens from Iroquois Drive to the present 300 acre site on Dixboro Road.

During the past academic year Prof. Norman has been on leave in Washington acting as
Advisor on the Life Sciences to the President of the National Academy of Sciences.

In presenting the appointment to the Regents, Vice President Heyns noted: “The vice presidency for research is a staff position calling for administrative skills of a high order. It is the primary duty of the vice president for research to develop with appropriate consultation the research policy of the University and to establish the administrative procedures which permit research to be done with maximum effectiveness.

"It is our belief that Prof. Norman’s past experience, his clear understanding of the research function of the University and the conditions under which it thrives, and his dedication to having research and teaching mutually reinforce each other, make him an ideal candidate for this demanding post,” Heyns said.