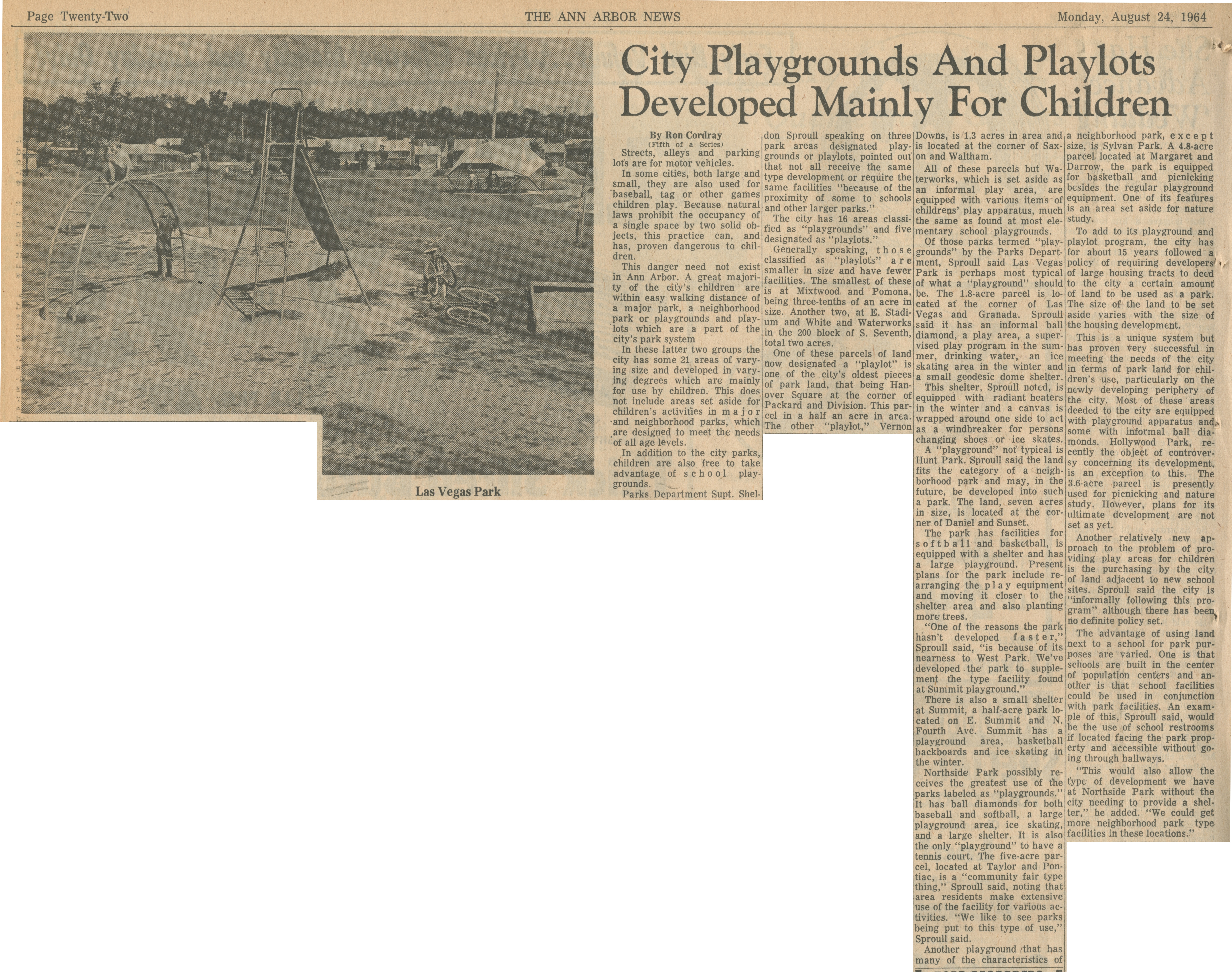 (Fifth of a Series)

Streets, alleys and parking lots are for motor vehicles.

In some cities, both large and small, they are also used for baseball, tag or other games children play. Because natural laws prohibit the occupancy of a single space by two solid objects, this practice can, and has, proven dangerous to children.

This danger need not exist in Ann Arbor. A great majority of the city’s children are within easy walking distance of a major park, a neighborhood park or playgrounds and playlots which are a part of the city’s park system

In these latter two groups the city has some 21 areas of varying size and developed in varying degrees which are mainly for use by children. This does not include areas set aside for children’s activities in major and neighborhood parks, which are designed to meet the needs of all age levels.

In addition to the city parks, children are also free to take advantage of school playgrounds.

Parks, Department Supt. Sheldon Sproull speaking on three park areas designated playgrounds or playlots, pointed out that not all receive the same type development or require the same facilities “because of the proximity of some to schools and other larger parks.”

The city has 16 areas classified as "playgrounds” and five designated as “playlots.”

Generally speaking, those classified as “playlots” are smaller in size and have fewer facilities. The smallest of these is at Mixtwood. and Pomona, being three-tenths of an acre in size. Another two, at E. Stadium and White and Waterworks in the 200 block of S. Seventh, total two acres.

One of these parcels of land now designated a “playlot” is one of the city’s oldest pieces of park land, that being Hanover Square at the corner of Packard and Division. This parcel in a half an acre in area. The other “playlot,” Vernon Downs, is 1.3 acres in area and is located at the corner of Saxon and Waltham.

All of these parcels but Waterworks, which is set aside as an informal play area, are equipped with various items of childrens’ play apparatus, much the same as found at most elementary school playgrounds.

Of those parks termed “playgrounds” by the Parks Department, Sproull said Las Vegas Park is perhaps most typical of what a "playground” should be. The 1.8-acre parcel is located at the corner of Las Vegas and Granada. Sproull said it has an informal ball diamond, a play area, a supervised play program in the summer, drinking water, an ice skating area in the winter and a small geodesic dome shelter.

This shelter. Sproull noted, is equipped with radiant heaters in the winter and a canvas is wrapped around one side to act as a windbreaker for persons changing shoes or ice skates.

A “playground” not typical is Hunt Park. Sproull said the land fits the category of a neighborhood park and may, in the future, be developed into such a park. The land, seven acres in size, is located at the corner of Daniel and Sunset.

The park has facilities for softball and basketball, is equipped with a shelter and has a large playground. Present plans for the park include rearranging the play equipment and moving it closer to the shelter area and also planting more trees.

“One of the reasons the park hasn’t developed faster,” Sproull said, “is because of its nearness to West Park. We’ve developed the park to supplement the type facility found at Summit playground.”

There is also a small shelter at Summit, a half-acre park located on E. Summit and N. Fourth Ave. Summit has a playground area, basketball backboards and ice skating in the winter.

Northside Park possibly receives the greatest use of the parks labeled as “playgrounds.” It has ball diamonds for both baseball and softball, a large playground area, ice skating, and a large shelter. It is also the only “playground” to have a tennis court. The five-acre parcel, located at Taylor and Pontiac, is a “community fair type thing,” Sproull said, noting that area residents make extensive use of the facility for various activities. “We like to see parks being put to this type of use,” Sproull said.

Another playground -that has many of the characteristics of a neighborhood park, except size, is Sylvan Park. A 4.8-acre parcel located at Margaret and Darrow, the park is equipped for basketball and picnicking besides the regular playground equipment. One of its features is an area set aside for nature study.

To add to its playground and playlot program, the city has for about 15 years followed a policy of requiring developers of large housing tracts to deed to the city a certain amount of land to be used as a park. The size of the land to be set aside varies with the size of the housing development.

This is a unique system but has proven very successful in meeting the needs of the city in terms of park land for children's use, particularly on the newly developing periphery of the city. Most of these areas deeded to the city are equipped with playground apparatus and some with informal ball diamonds. Hollywood Park, recently the object of controversy concerning its development, is an exception to this. The 3.6-acre parcel is presently used for picnicking and nature study. However, plans for its ultimate development are not set as yet.

Another relatively new approach to the problem of providing play areas for children is the purchasing by the city of land adjacent to new school sites. Sproull said the city is “informally following this program” although there has been no definite policy set.

The advantage of using land next to a school for park purposes are varied. One is that schools are built in the center of population centers and another is that school facilities could be used in conjunction with park facilities An example of this, Sproull said, would be the use of school restrooms if located facing the park property and accessible without going through hallways.

"This would also allow the type of development we have at Northside Park without the city needing to provide a shelter,” he added. “We could get more neighborhood park type facilities in these locations."