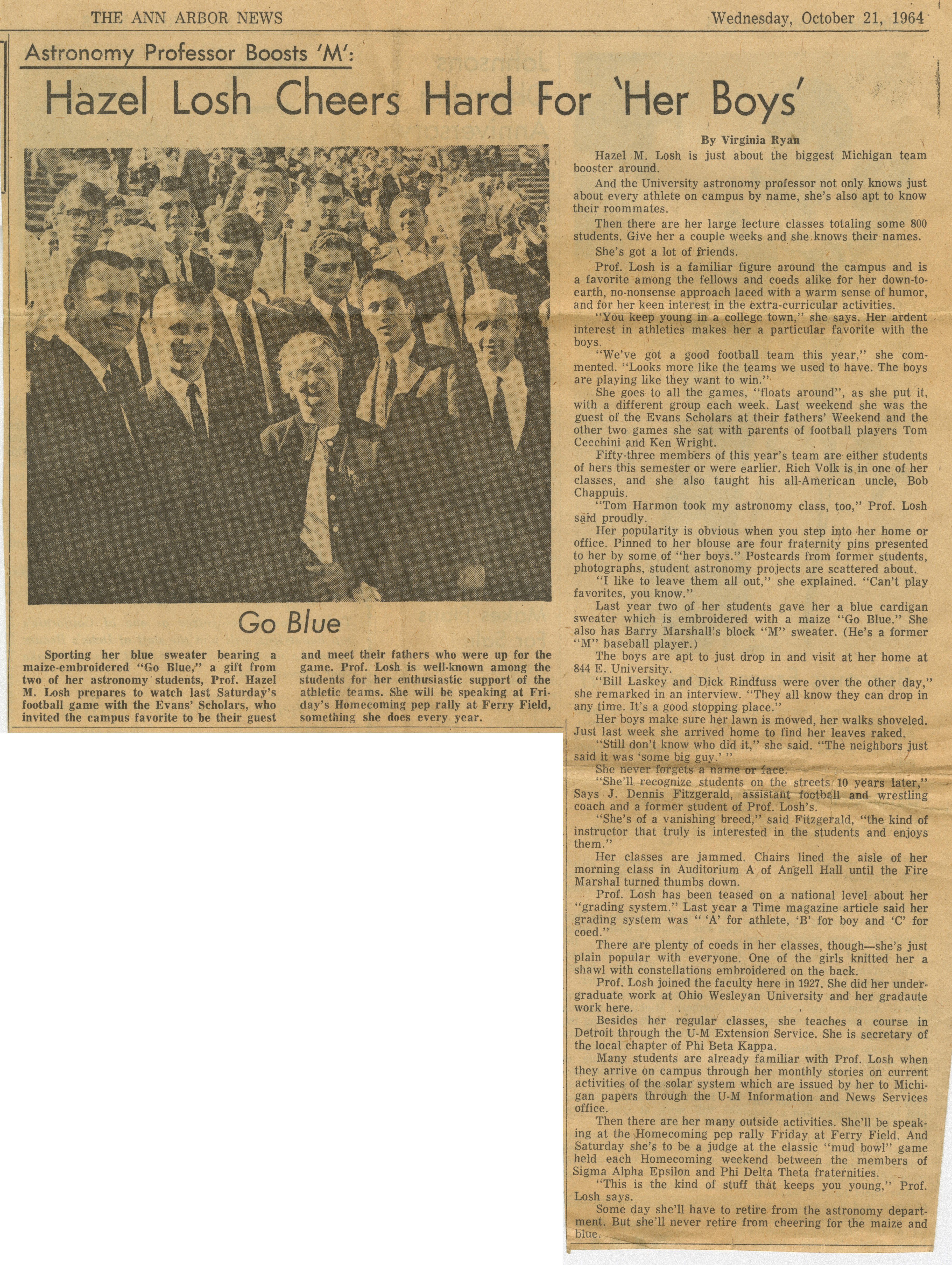 Hazel M. Losh is just about the biggest Michigan team booster around.

And the University astronomy professor not only knows just about every athlete on campus by name, she’s also apt to know their roommates.

Then there are her large lecture classes totaling some 800 students. Give her a couple weeks and she knows their names.
She's got a lot of friends.

Prof. Losh is a familiar figure around the campus and is a favorite among the fellows and coeds alike for her down-to-earth, no-nonsense approach laced with a warm sense of humor, and for her keen interest in the extra-curricular activities.
“You keep young in a college town,” she says. Her ardent interest in athletics makes her a particular favorite with the boys.

“We’ve got a good football team this year,” she commented. “Looks more like the teams we used to have. The boys are playing like they want to win.”

She goes to all the games, “floats around”, as she put it, with a different group each week. Last weekend she was the guest of the Evans Scholars at their fathers’ Weekend and the other two games she sat with parents of football players Tom Cecchini and Ken Wright.

Fifty-three members of this year’s team are either students of hers this semester or were earlier. Rich Volk is in one of her classes, and she also taught his all-American uncle, Bob Chappuis.

Her popularity is obvious when you step into her home or office. Pinned to her blouse are four fraternity pins presented to her by some of “her boys.” Postcards from former students, photographs, student astronomy projects are scattered about.

“I like to leave them all out,” she explained. “Can’t play favorites, you know.”

Last year two of her students gave her a blue cardigan sweater which is embroidered with a maize “Go Blue.” She also has Barry Marshall^ block “M” sweater. (He’s a former “M” baseball player.)

The boys are apt to just drop in and visit at her home at 844 E. University.

“Bill Laskey and Dick Rindfuss were over the other day,” she remarked in an interview. “They all know they can drop in any time. It’s a good stopping place.”

Her boys make sure her lawn is mowed, her walks shoveled. Just last week she arrived home to find her leaves raked.

"Still don’t know who did it,” she said. “The neighbors just said it was ‘some big guy.’ ”
She never forgets a name or face.

“She’s of a vanishing breed,” said Fitzgerald, “the kind of instructor that truly is interested in the students and enjoys them."

Her classes are jammed. Chairs lined the aisle of her morning class in Auditorium A of Angell Hall until the Fire Marshal turned thumbs down.

Prof. Losh has been teased on a national level about her “grading system.” Last year a Time magazine article said her grading system was “ ‘A’ for athlete, ‘B’ for boy and ‘C’ for coed.”

There are plenty of coeds in her classes, though—she’s just plain popular with everyone. One of the girls knitted her a shawl with constellations embroidered on the back.

Prof. Losh joined the faculty here in 1927. She did her undergraduate work at Ohio Wesleyan University and her graduate work here.

Besides her regular classes, she teaches a course in Detroit through the U-M Extension Service. She is secretary of the local chapter of Phi Beta Kappa.

Many students are already familiar with Prof. Losh when they arrive on campus through her monthly stories on current activities of the solar system which are issued by her to Michigan papers through the U-M Information and News Services office.

Then there are her many outside activities. She’ll be speaking at the Homecoming pep rally Friday at Ferry Field. And Saturday she’s to be a judge at the classic “mud bow!” game held each Homecoming weekend between the members of Sigma Alpha Epsilon and Phi Delta Theta fraternities.

“This is the kind of stuff that keeps you young,” Prof. Losh says.

Some day she’ll have to retire from the astronomy department. But she’ll never retire from cheering for the maize and blue.

Sporting her blue sweater bearing a maize-embroidered “Go Blue,” a gift from two of her astronomy students, Prof. Hazel M. Losh prepares to watch last Saturday's football game with the Evans’ Scholars, who invited the campus favorite to be their guest and meet their fathers who were up for the game. Prof. Losh is well-known among the students for her enthusiastic support of the athletic teams. She will be speaking at Friday’s Homecoming pep rally at Ferry Field, something she does every year.