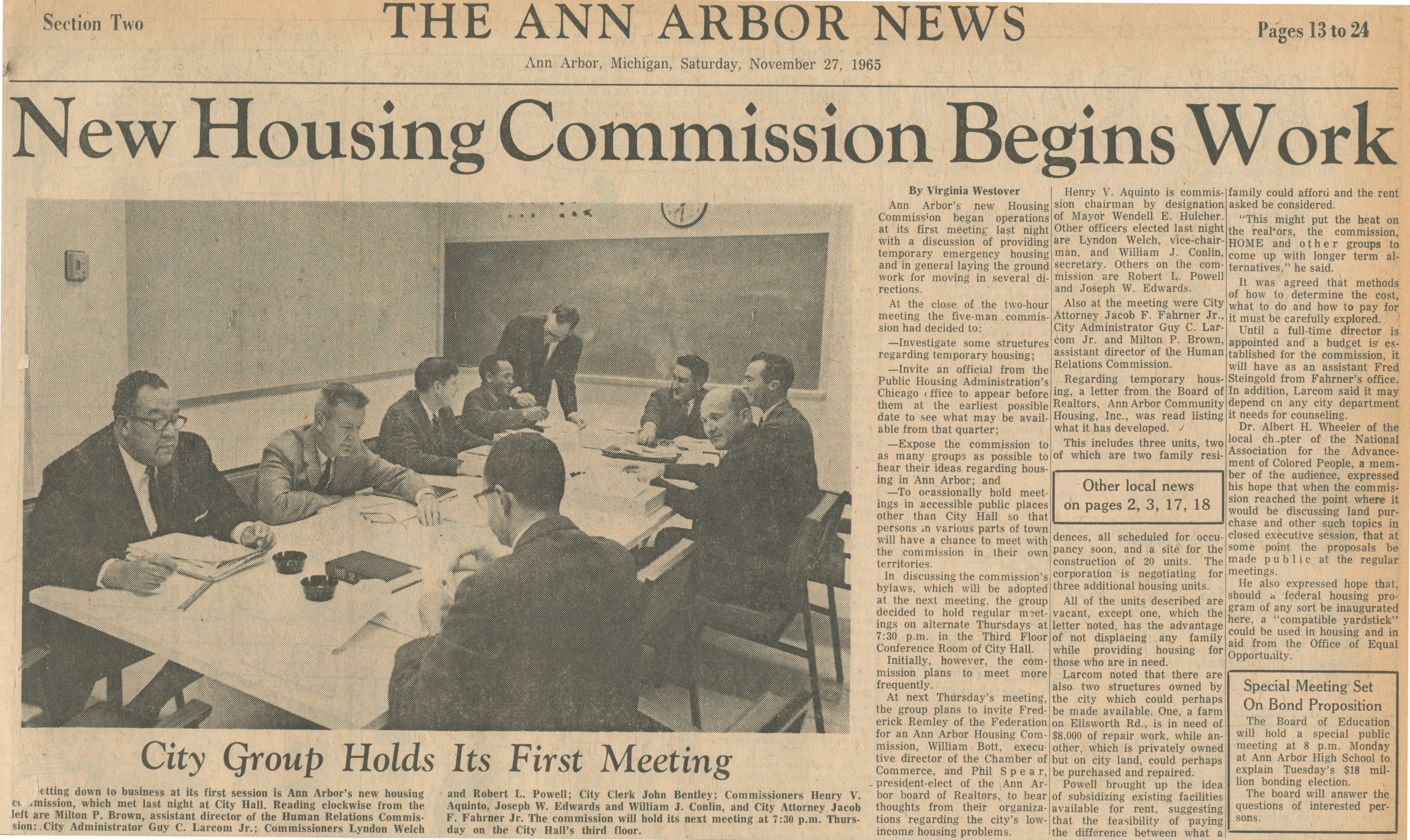 Ann Arbor's new Housing Commission began operations at its first meeting last night with a discussion of providing temporary emergency housing and in general laying the ground work for moving in several directions.

At the close of the two-hour meeting the five-man commission had decided to:
-Investigate some structures regarding temporary housing;
-Invite an official form the Public Housing Administration's Chicago office to appear before them at the earliest possible date to see what may be available from that quarter;
-Expose the commission to as many groups as possible to hear their ideas regarding housing in Ann Arbor; and
-To occasionally hold meetings in accessible public places other than City Hall so that persons in various parts of town will have a chance to meet with the commission in their own territories.

In discussing the commission's bylaws, which will be adopted at the next meeting, the group decided to hold regular meetings on alternate Thursdays at 7:30 p.m. in the Third Floor Conference Room at City Hall.

Initially, however, the commission plans to meet more frequently.

At next Thursday's meeting the group plans to invite Frederick Remley of the Federation for an Ann Arbor Housing Commission, William Bott, executive director of the Chamber of Commerce, and Phil Spear, president-elect of the Ann Arbor board of Realtors, to hear thoughts from their organizations regarding the city's low-income housing problems.

Regarding temporary housing, a letter from the Board of Realtors, Ann Arbor Community Housing, Inc., was read listing what it has developed.

This include three units, two of which are two family residences, all scheduled for occupancy soon, and a site for the construction of 20 unites. The corporation is negotiating for three additional housing units.

All of the units described are vacant, except one, which the letter noted, has the advantage of not displacing any family while providing housing fo those who are in need.

Larcom noted that there are also two structure owned by the city which could perhaps  be made available. One, a farm on Ellsworth Rd., is in need of $8,000 of repair work, while another, which is privately owned but on city land, could perhaps be purchased and repaired.

Powell brought up the idea of subsidizing existing facilities available for rent, suggesting that the feasibility of paying the difference between what family could afford and the rent asked be considered.

"This might put the heat on realtors the commission, HOME and other groups to come up with longer term alternatives," he said.

It was agreed that methods of how to determine the cost, what to do and how to pay for it must be carefully explored.

Until a full-time director is appointed and a budget is established for the commission, it will have as an assistant Fred Steingold from Fahrner's office. In addition, Larcom said it may depend on any city department it needs for counseling.

Dr. Albert H. Wheeler of the local chapter of the National Association for the Advancement of Colored People, a member of the audience, expressed his hope that when the commission reached the point where it would be discussing land purchase and other such topics in closed executive session, that at some point the proposals be made public at the regular meetings.

He also expressed hope that, should a federal housing program of any sort be inaugurated here, a "compatible yardstick" could be used in housing and in aid from the Office of Equal Opportunity.

Special Meeting Set On Bond Proposition
The Board of Education will hold a special public meeting at 8 p.m. Monday at Ann Arbor High School to explain Tuesday's $18 million bonding election. The board will answer the questions of interested persons.