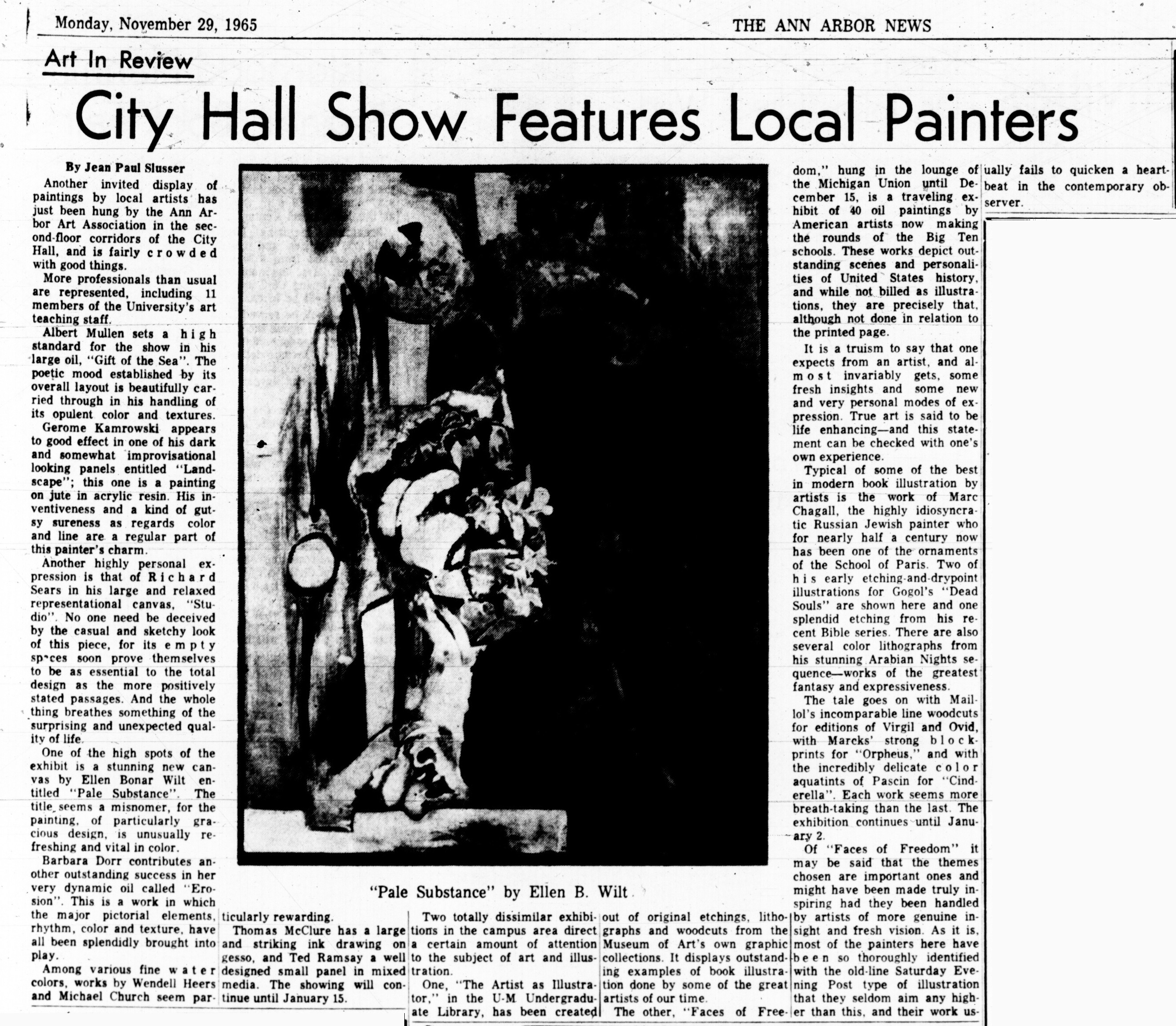 Another invited display of paintings by local artists has just been hung by the Ann Arbor Art Association in the second floor corridors of the City Hall, and is fairly crowded with good things.

More professionals than usual are represented, including 11 members of the University’s art teaching staff.

Albert Mullen sets a high standard for the show in his large oil, “Gift of the Sea”. The poetic mood established by its overall layout is beautifully carried through in his handling of its opulent color and textures.

Gerome Kamrowski appears to good effect in one of his dark and somewhat improvisational looking panels entitled “Landscape”; this one is a painting on jute in acrylic resin. His inventiveness and a kind of gutsy sureness as regards color and line are a regular part of this painter’s charm

Another highly personal expression is that of Richard Sears in his large and relaxed representational canvas, “Studio”. No one need be deceived by the casual and sketchy look of this piece, for its empty spaces soon prove themselves to be as essential to the total design as the more positively stated passages. And the whole thing breathes something of the surprising and unexpected quality of life.

One of the high spots of the exhibit is a stunning new canvas by Ellen Bonar Wilt entitled “Pale Substance” The title seems a misnomer, for the painting, of particularly gracious design, is unusually refreshing and vital in color.

Barbara Dorr contributes another outstanding success in her very dynamic oil called "Erosion”. This is a work in which the major pictorial elements, rhythm, color and texture, have all been splendidly brought into play.

Thomas McClure has a large and striking ink drawing on a certain amount of attention gesso, and Ted Ramsay a well-designed small panel in mixed media. The showing will continue until January 15.

Pale Substance” by Ellen B. Wilt

Two totally dissimilar exhibitions in the campus area direct a certain amount of attention to the subject of art and illustration.

One, “The Artist as Illustrator,” in the U-M Undergraduate Library, has been created out of original etchings, lithographs and woodcuts from the Museum of Art's own graphic collections. It displays outstanding examples of book illustration done by some of the great artists of our time.

The other, “Faces of Freedom,” hung in the lounge of the Michigan Union until December 15, is a traveling exhibit of 40 oil paintings by American artists now making the rounds of the Big Ten schools. These works depict outstanding scenes and personalities of United States history, and while not billed as illustrations. they are precisely that, although not done in relation to the printed page.

It is a truism to say that one expects from an artist, and al most invariably gets, some fresh insights and some new and very personal modes of expression. True art is said to be life enhancing—and this statement can be checked with one’s own experience.

Typical of some of the best in modern book illustration by artists is the work of Marc Chagall, the highly idiosyncratic Russian Jewish painter who for nearly half a century now has been one of the ornaments of the School of Paris. Two of his early etching and drypoint illustrations for Gogol’s “Dead Souls” are shown here and one splendid etching from his recent Bible series There are also several color lithographs from his stunning Arabian Nights sequence—works of the greatest fantasy and expressiveness.

The tale goes on with Maillol’s incomparable line woodcuts for editions of Virgil and Ovid, with Marcks’ strong block prints for “Orpheus,” and with the incredibly delicate color aquatints of Pascin for “Cinderella”. Each work seems more breath-taking than the last. The exhibition continues until January 2.

Of “Faces of Freedom” it may be said that the themes chosen are important ones and might have been made truly in spiring had they been handled by artists of more genuine insight and fresh vision. As it is, most of the painters here have been so thoroughly identified with the old-line Saturday Evening Post type of illustration that they seldom aim any high er than this, and their work usually fails to quicken a heartbeat in the contemporary observer.