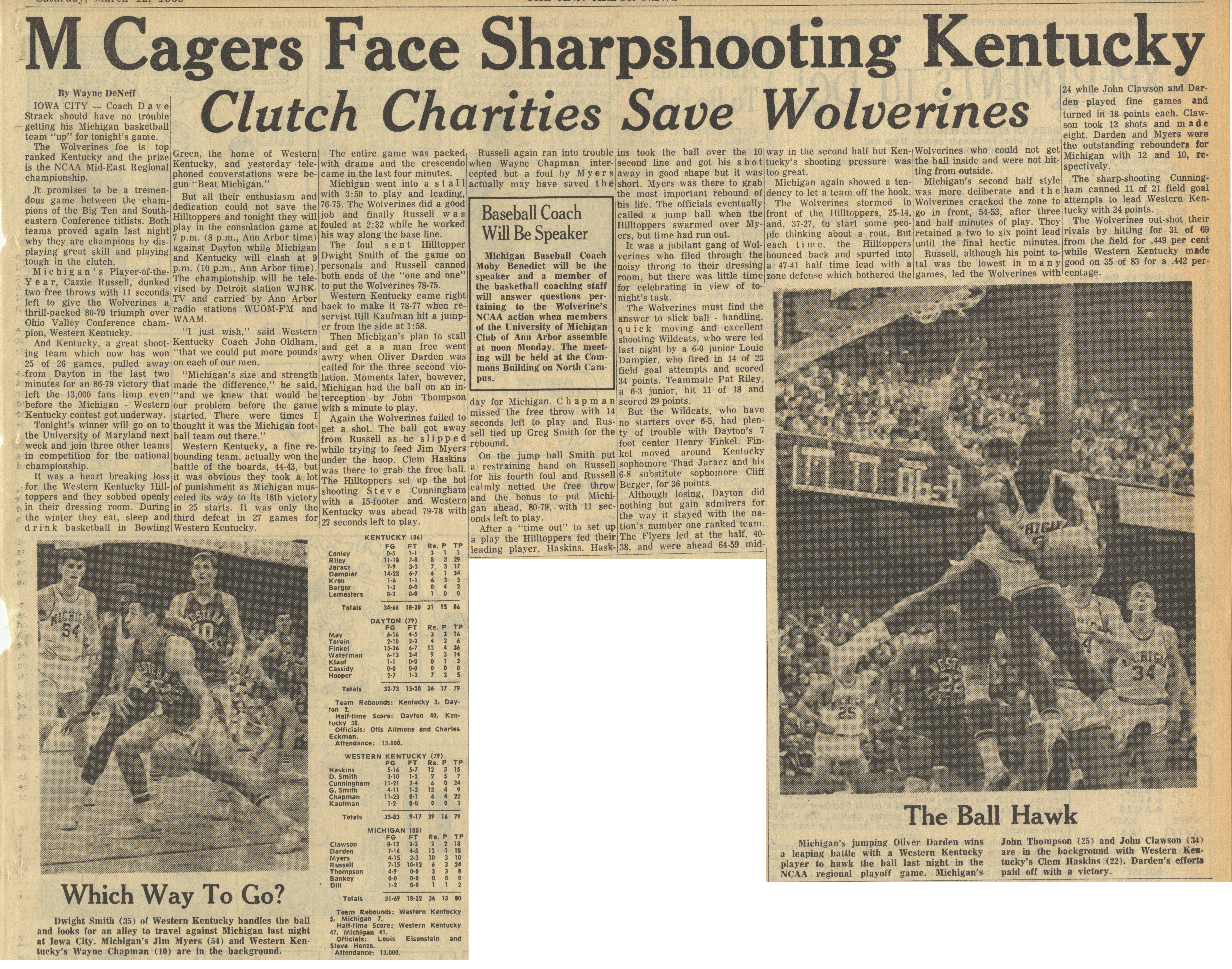 IOWA CITY — Coach Dave
Strack should have no trouble
getting his Michigan basketball
team "up" for tonight's game.

The Wolverines foe is top.

ranked Kentucky and the prize (Jrreen- the home of Western! The entire game was packed Russell again ran into trouble ins took the ball over the 10 way in the second half but Ken-1 Wolverines who could not get
is the NCAA Mid-East Regional Kentucky, and yesterday tele-with drama and the crescendo when Wayne Chapman inter-! second line and got his shottucky's shooting pressure was the ball inside and were not hit-
championship. " phoned converstations were be-came in the last four minutes, ec, a foul by My erst away in good shape but it was too great, ting from outside.

It promises to be a tremen SW'Beat Michigan." Michigan went into a s t a 11 aclinic :nay have saved the short. Myers was there to grab Michigan again showed a ten- Michigan's second i. ie
dous same between the cham But an their enthusiasm and with 3:50 to play and leading,__________________the most important rebound of dene" -i team off the hook. was more deliberate and the

nionsof thp Rio Tpn anrl eastern Conference-titlists Roth''"11110??^ and finally Russe11 was baseball LOaCh Ic; iump ball when the front of the Hilltoppers, 25-14,]go in front, 54.53, after three
teams Droved a»am last nishtiP1^' i" the consolation game at fouled at 2:32 while he worked „„„ ^ -, . Hniiu^,,;--. swarmed over My-and, 37-27, to start some peo-jand half minutes of play. They
whv thev arp rhamnions hv dV 7 P-"1- (8 P-"1-. Ann Arbor time) his way along the base line. VVlll DC OpeaRer ers, but time had run out. pie thinking about a rout. Butiretained a two to six point lead
niavino great skill and niavine against Dayton while Michigan The ^"1 sent Hilltopper r It was a jubilant gang of Wol-each time, the Hilltoppers until the final hectic minutes.
tough In the clutch and Kentucky will clash at 9 Dwight Smith of the game on Michigan Baseball Coach |verines who filed through the bounced back and spurted into Russell, although his point to-

Michigan's Plaver-of-the P-m. (10 p.m.. Ann Arbor time). Personals and Russell canned Moby Benedict win be the noisy throng to their dressing a 47-41 half time lead with a|tal was the lowest in many
Year Cazzie Russpll riunkpril The championship will be tele- "oth ends of the "one and one" speaker and a member of room, but there was little time|zone defense which bothered theigames, led the Wolverines with
two free throws with 11 second^151^ ^ Detroit Nation WJBK- to put the Wolverines 78-75. the basketball coaching staff for celebrating in view of to-
left to give the ^ and carried bv Ann Arbor Western Kentucky came right will answer questions per., night's task.
thrill-Dacked 8079 triumnh over'^adio stations WUOM-FM and back to make it 78-77 when re- taining to the Wolverine's The Wolverines must find the
Ohio Valley Conferencecham-^^1- servist Bm Kaufman hit a ^P-i W^ action when members |answer to slick ball - handling,
pion, Western Kentucky. ! "I just wish." said Western!^from thesldeat 1,58. .„[ of the University of Michigan quick moving and excellent

before the Michigan - Western our problem before the game -thaminiitpto^^^^^^^ inompson ^y ^ Michigan. C h a p m a n scored 29 points.

Kentucky contest got underway, started. There were times I ApainthpWolverines failed to missed the free throw with 14 But the wildcats' wh0 have

Tonight's winner will go on to thought it was the Michigan foot- got a shot Thp ball eot awav sec(mds left t0 P^ and Rus- no starters over 6-5, had plen-
the University of Maryland next ball team out there." l^ ^pll as hp slinned se11 tied "P Greg smith £or the ^ of trouble with Dayton s 7
week and join three other teams Western Kentucky, a fine re- S tr^ne to Led Jim Mvers rebound- toot center Henry Finkel. Fin.
in competition for the national bounding team, actually won the ^p,, thp hnnn FlpmH^^^^ On the jump ball Smith put kel ——^ ——^ Kpntiickv
championship, battle of the boards, 44-43, but was there to orabthe free ball la restraining hand on —"""" —

It was a heart breaking loss it was obvious they took a lot mu, ffiii+nnnp^ Ji: Tin thp hot if or his fourth foul and Russell 6-8 substitute sophomore Cliff
for the Western Kentucky Hill- of punishmentas Michigan mus- •h^tinoStPvp^r netted the free throw I Berger, for 36 points.
toppers and they sobbed openly celed its way to its 18th victory -fha0 ic-f^ar and Westem and the bonus to put Michi-S Although losing, Dayton did
,?s •;hiii ih,-!^ room. During in 25 starts. It was only the Sentuc^kv was a^iead 79-78 w^ ahead, 80-79, with 11 sec-lnothing but gain admirers for

Hilltoppers fed their The Flyers led at the half, 40-

T. ,.,,c , ho.^ breaking loss it was obvious they took a lot ^o Hilltoopers set up the hotltor his fourth foul and

John Thompson (25) and John Clawson (34)
are in the background with Western Ken-
tucky's Clem Haskins (22). Darden's efforts
paid off with a victory.

Which Way To Go?

Dwight Smith (35) o) n Kentucky handles the ball
and looks for an alley to n'a»ci against Michigan last night
at Iowa City. Michigan's Jim Myers (54) and Western Ken-
tucky's Wayne Chapman (10) are in the background.

24 while John Clawson and Dar-
den played fine games and
turned in 18 points each. Claw-
son took 12 •l^(c• and made
eight. Darde Myers were
the outstanding icbounders for
Michigan with 12 and 10, re-
I spectively.