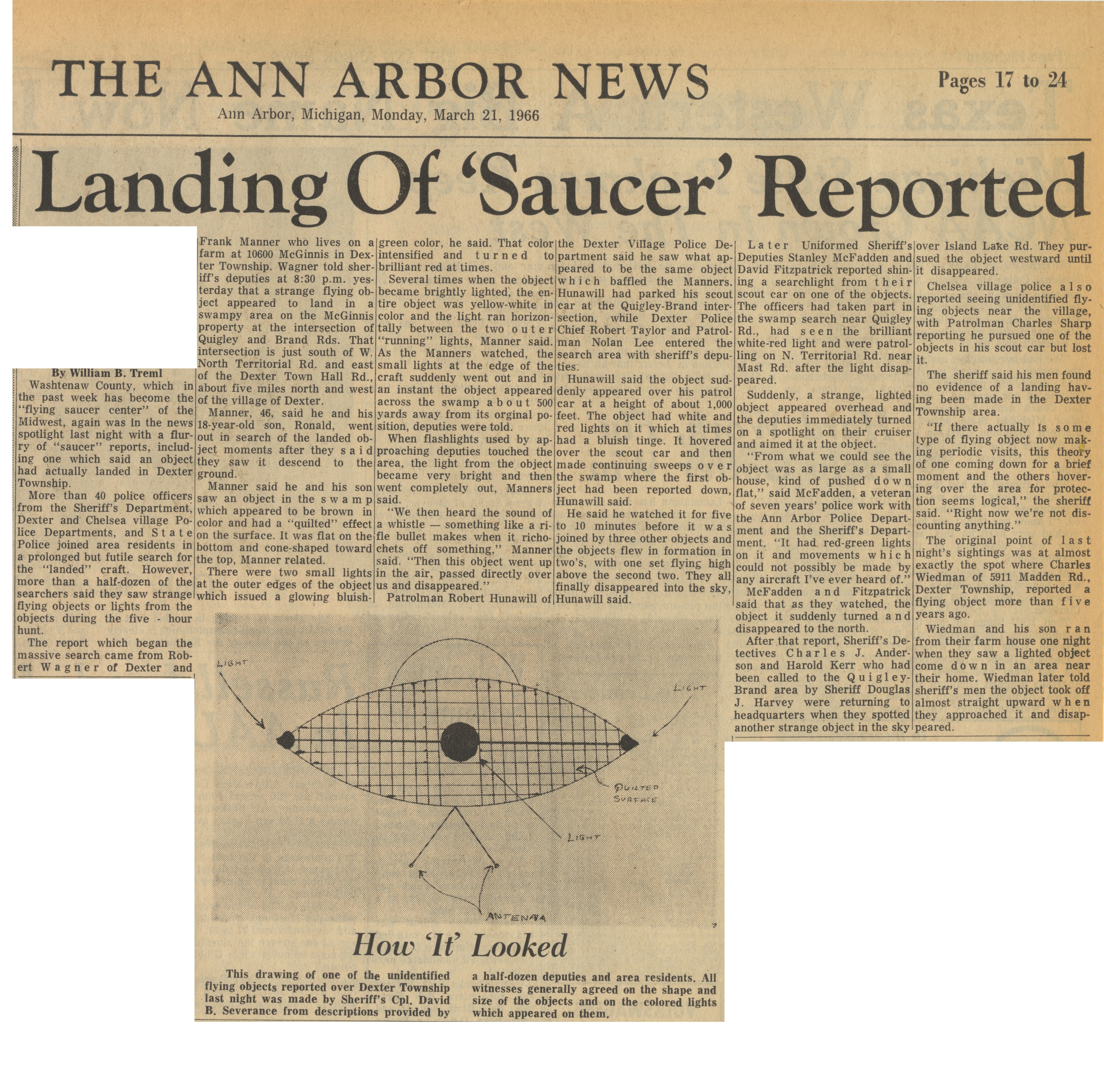 Washtenaw County, which the past week has become the "flying saucer center” of the Midwest, again was in the spotlight last night with a flurry of “saucer” reports, including one which said an object had actually landed in Dexter Township.

More than 40 police officers from the Sheriff’s Department, Dexter and Chelsea village Police Departments, and State Police joined area residents in a prolonged but futile search for the “landed” craft. However, more than a half-dozen of the searchers said they saw strange flying objects or lights from the objects during the five-hour hunt.

The report which began the massive search came from Robert Wagner of Dexter and Frank Manner who lives on a farm at 10600 McGinnis in Dexter Township. Wagner told sheriff’s deputies at 8:30 p.m. yesterday that a strange flying object appeared to land in a swampy area on the McGinnis property at the intersection of Quigley and Brand Rds. That intersection is just south of W. North Territorial Rd. and east of the Dexter Town Hall Rd., five miles north and west of the village of Dexter.

Manner, 46, said he and his 18-year-old son, Ronald, went out in search of the landed object moments after they said they saw it descend to the ground.

Manner said he and his son saw an object in the swamp which appeared to be brown in color and had a "quilted” effect on the surface. It was flat on the bottom and cone-shaped toward the top, Manner related.

There were two small lights at the outer edges of the object which issued a glowing bluish-green color, he said. That color intensified and turn brilliant red at times.

Several times when the object became brightly lighted, the entire object was yellow-white in color and the light ran horizontally between the two outer "running" lights. Manner said. As the Manners watched, the small lights at the edge of the craft suddenly went out and in instant the object appeared across the swamp about 500 yards away from its original position, deputies were told.

When flashlights used by approaching deputies touched the area, the light from the object became very bright and then went completely out, Manners said.

“We then heard the sound of a whistle — something like a rifle bullet makes when it ricochets off something,” Manner said. "Then this object went up in the air, passed directly over us and disappeared.”

Patrolman Robert Hunawill of the Dexter Village Police Department said he saw what appeared to be the same object which baffled the Manners. Hunawill had parked his scout car at the Quigley-Brand intersection, while Dexter Police Chief Robert Taylor and Patrolman Nolan Lee entered the search area with sheriff’s deputies.

Hunawill said the object suddenly appeared over his patrol car at a height of about 1,000 feet. The object had white and red lights on it which at times had a bluish tinge. It hovered over the scout car and then made continuing sweeps over the swamp where the first object had been reported down, Hunawill said.

He said he watched it for five to 10 minutes before it was joined by three other objects and the objects flew in formation in two’s, with one set flying high above the second two. They all finally disappeared into the sky, Hunawill said.

Later Uniformed Sheriff’s Deputies Stanley McFadden and David Fitzpatrick reported shining a searchlight from their scout car on one of the objects. The officers had taken part in the swamp search near Quigley Rd., had seen the brilliant white-red light and were patrolling on N. Territorial Rd. near Mast Rd. after the light disappeared.

Suddenly, a strange, lighted object appeared overhead and the deputies immediately turned on a spotlight on their cruiser and aimed it at the object.

"From what we could see the object was as large as a small house, kind of pushed down flat,” said McFadden, a veteran of seven years’ police work with the Ann Arbor Police Department and the Sheriff’s Department. "It had red-green lights on it and movements which could not possibly be made by any aircraft I’ve ever heard of.”

McFadden and Fitzpatrick said that as they watched, the object it suddenly turned and disappeared to the north.

After that report, Sheriff’s Detectives Charles J. Anderson and Harold Kerr who had been called to the Quigley-Brand area by Sheriff Douglas J. Harvey were returning to headquarters when they spotted another strange object in the sky over Island Lake Rd. They pursued the object westward until it disappeared.

Chelsea village police also reported seeing unidentified flying objects near the village, with Patrolman Charles Sharp reporting he pursued one of the objects in his scout car but lost it.

The sheriff said his men found no evidence of a landing having been made in the Dexter Township area.

"If there actually is some type of flying object now making periodic visits, this theory of one coming down for a brief moment and the others hovering over the area for protection seems logical,” the sheriff said. "Right now we're not discounting anything.”

The original point of last night’s sightings was at almost exactly the spot where Charles Wiedman of 5911 Madden Rd., Dexter Township, reported a flying object more than five years ago.

Wiedman and his son ran from their farm house one night when they saw a lighted object come down in an area near their home. Wiedman later told sheriff’s men the object took off almost straight upward when they approached it and disappeared.

This drawing of one of the unidentified flying objects reported over Dexter Township last night was made by Sheriff’s Cpl. David B. Severance from descriptions provided by a half-dozen deputies and area residents. All witnesses generally agreed on the shape and size of the objects and on the colored lights which appeared on them.