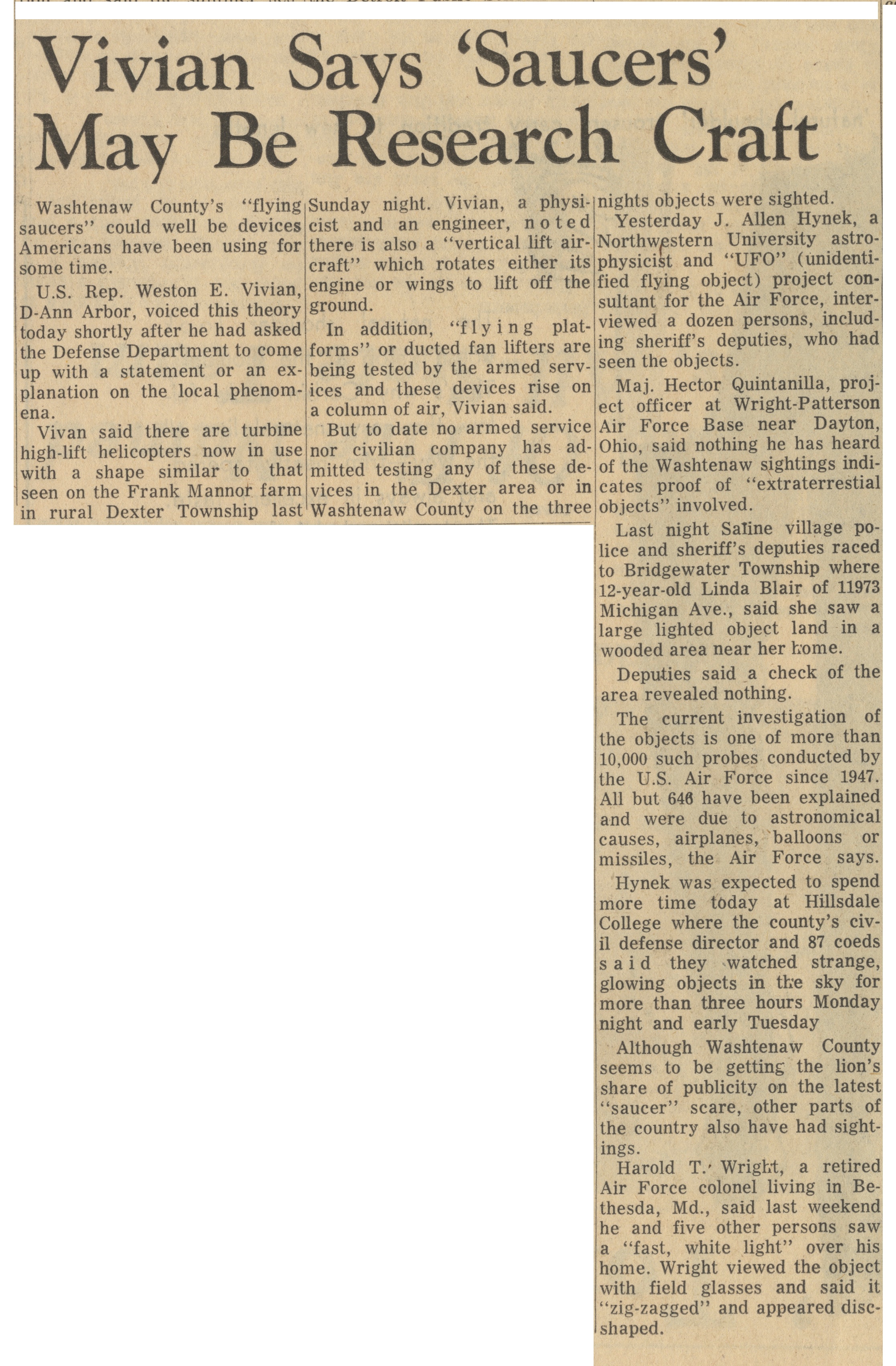 Washtenaw County’s “flying saucers” could well be devices Americans have been using for some time.

U.S. Rep. Weston E. Vivian, D-Ann Arbor, voiced this theory today shortly after he had asked Defense Department to come up with a statement or an explanation on the local phenomena.

Vivan said there are turbine high-lift helicopters now in use with a shape similar to that seen on the Frank Mannor farm rural Dexter Township last Sunday night. Vivian, a physicist and an engineer, noted there is also a "vertical lift aircraft” which rotates either its engine or wings to lift off the ground.

In addition, "flying plat forms” or ducted fan lifters are being tested by the armed services and these devices rise a column of air, Vivian said.

But to date no armed service nor civilian company has ad mitted testing any of these de vices in the Dexter area or in Washtenaw County on the three nights objects were sighted.

Maj. Hector Quintanilla, project officer at Wright-Patterson Air Force Base near Dayton, Ohio, said nothing he has heard of the Washtenaw sightings indicates proof of “extraterrestial objects” involved.

Deputies said a check of the area revealed nothing.

The current investigation of the objects is one of more than 10,000 such probes conducted by the U.S. Air Force since 1947. All but 646 have been explained and were due to astronomical causes, airplanes, balloons or missiles, the Air Force says.

Hynek was expected to spend more time today at Hillsdale College where the county’s civil defense director and 87 coeds said they watched strange, glowing objects in the sky for more than three hours Monday night and early Tuesday.

Although Washtenaw County seems to be getting the lion’s share of publicity on the latest “saucer” scare, other parts of the country also have had sightings.

Harold T. Wright, a retired Air Force colonel living in Bethesda, Md., said last weekend he and five other persons saw a “fast, white light” over his home. Wright viewed the object with field glasses and said it “zig-zagged” and appeared disc-shaped.