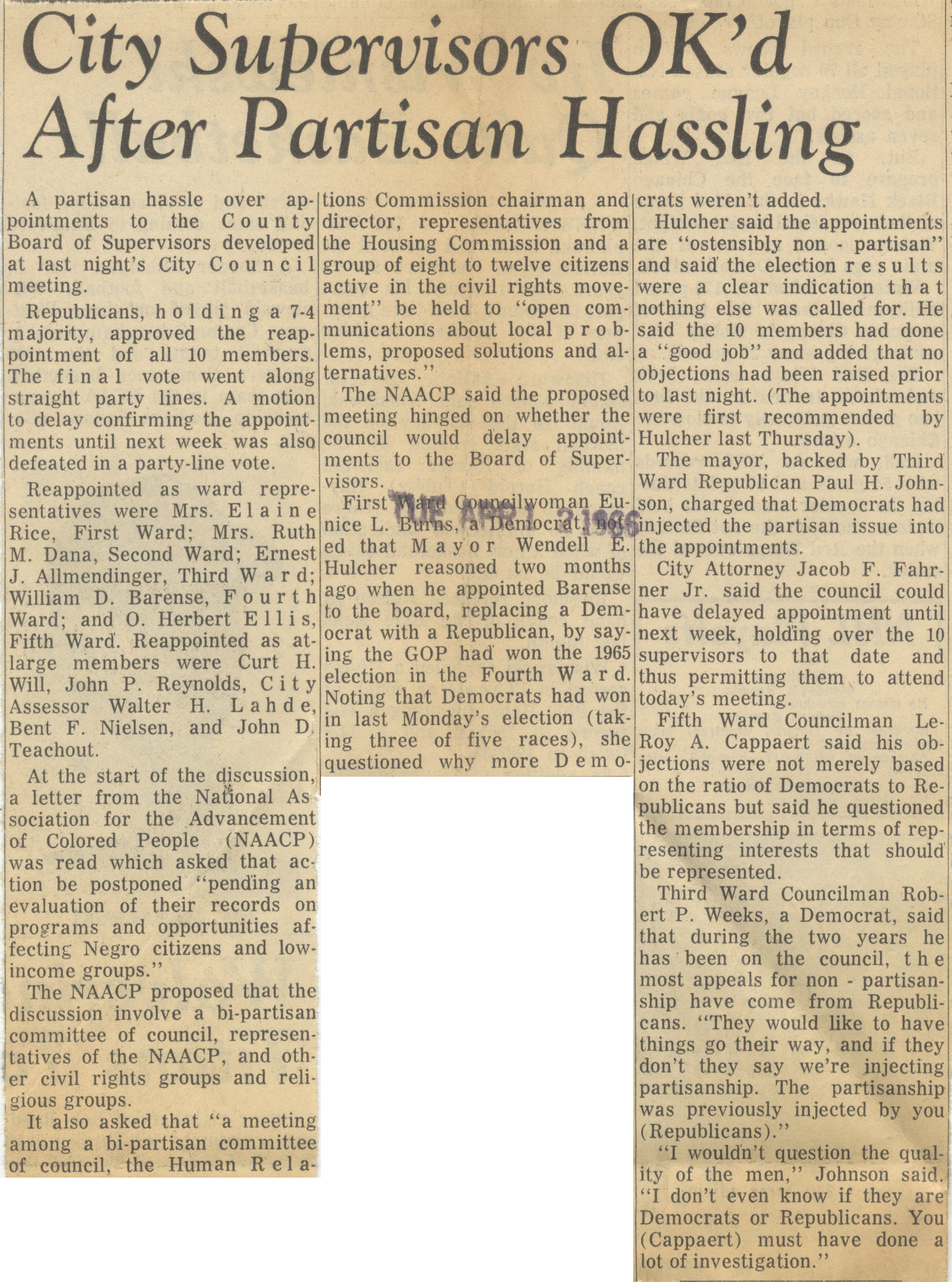 ﻿City Supervisors OK’d After Partisan Hassling<br><br>A partisan hassle o pointments to the County Board of Supervisors developed at last night’s City Council meeting.<br><br>Republicans, holding a 7-4 majority, approved the reappointment of all 10 members. The final vote went along straight party lines. A motion to delay confirming the appointments until next week was also defeated in a party-line vote.<br><br>Reappointed as ward representatives were Mrs. Elaine Rice, First Ward: Mrs. Ruth M. Dana, Second Ward; Ernest J. Allmendinger, Third W William D. Barense, Fourth Ward; and 0. Herbert Ellis, Fifth Ward. Reappointed as at-large members were Curt H. Will, John P. Reynolds, City Assessor Walter H. L a h d e Bent F. Nielsen, and John D Teachout.<br><br>At the start of the discussion, letter from the National As sociation for the Advancement of Colored People (NAACP) was read which asked that action be postponed “pending an evaluation of their records on programs and opportunities affecting Negro citizens and low-income groups.”<br><br>The NAACP proposed that the discussion involve a bi-partisan committee of council, representatives of the NAACP, and other civil rights groups and religious groups.<br><br>It also asked that “a meeting among a bi-partisan committee of council, the Human R e I a-<br><br>tions Commission chairman and director, representatives from the Housing Commission and a group of eight to twelve citizens active in the civil rights movement” be held to “open communications about local problems. proposed solutions and alternatives.”<br><br>The NAACP said the proposed meeting hinged on whether the council would delay appointments to the Board of Supervisors.<br><br>FirsttSfl? Qpwyjlwoniaii Eu-nice L. iftMvs, rS luS nlo c i"e IJ ww ed that Mayor Wendell E. Hulcher reasoned two months ago when he appointed Barense to the board, replacing a Democrat with a Republican, by saying the GOP had won the 1965 election in the Fourth Ward. Noting that Democrats had won in last Monday's election (taking three of five races), she questioned why more T'........<br><br>crats weren’t added.<br><br>Hulcher said the appointments are “ostensibly non • partisan” and said the election result clear indication that nothing else was called for. He said the 10 members had done a "good job” and added that objections had been raised prior to last night. (The appointments were first recommended by Hulcher last Thursday).<br><br>The mayor, backed by Third Ward Republican Paul H. John-1 son, charged that Democrats had gnjected the partisan issue into the appointments.<br><br>City Attorney Jacob F. Fahr-ner Jr. said the council could have delayed appointment until next week, holding over the 10 supervisors to that date and thus permitting them , to attend today's meeting.<br><br>Fifth Ward Councilman Le-Roy A. Cappaert said his objections were not merely based the ratio of Democrats to Republicans but said he questioned the membership in terms of representing interests that should be represented.<br><br>Third Ward Councilman Robert P. Weeks, a Democrat, said that during the two years he has been on the council, the most appeals for non - partisanship have come from Republicans. “They would like to have things go their way. and if they don’t they say we’re injecting partisanship. The partisanship was previously injected by you (Republicans).”<br><br>"I wouldn’t question the quality of the men,” Johnson said. “I don’t even know if they are Democrats or Republicans. You (Cappaert) must have done a lot of investigation.”