Cracks Show Up In Vivian Support 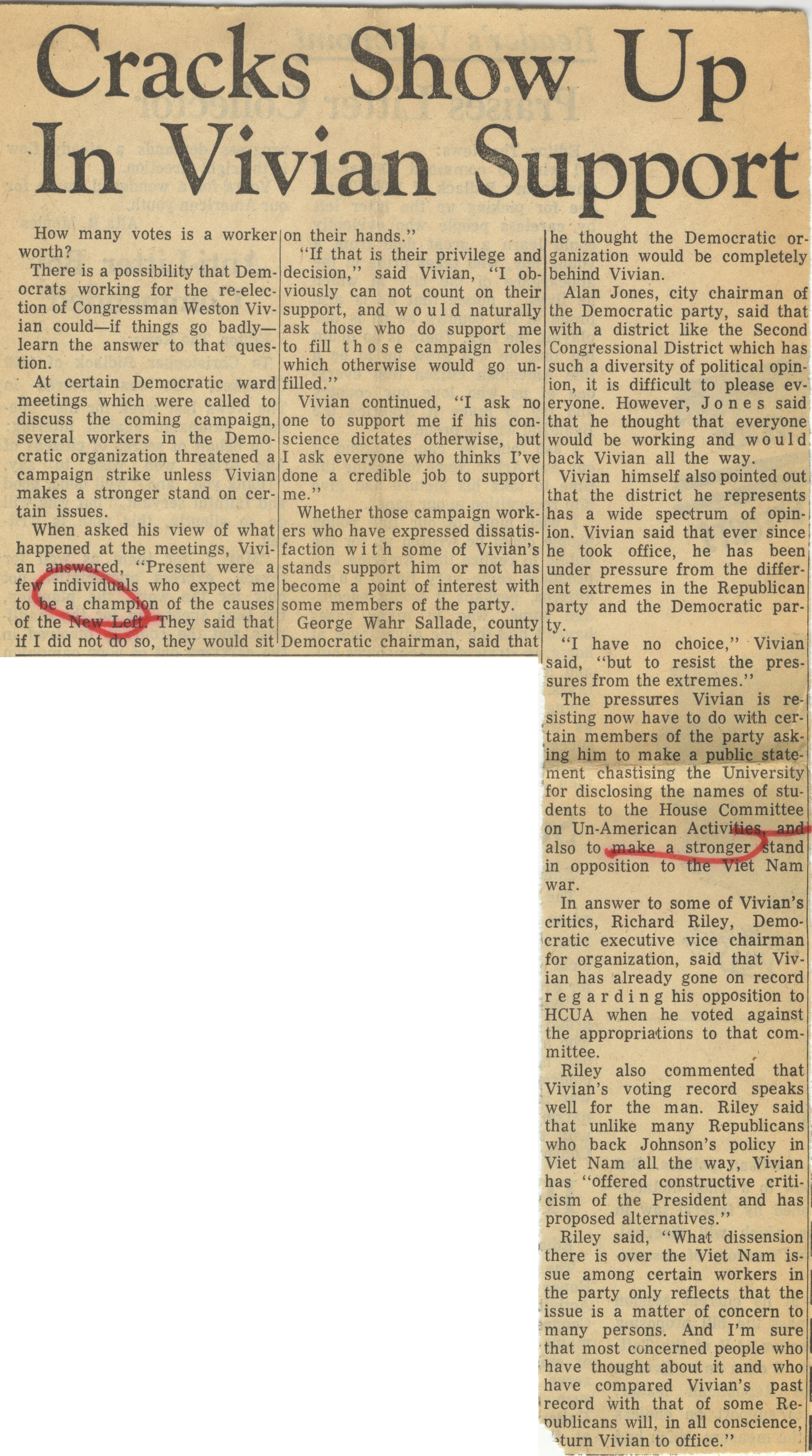 ﻿Cracks Show Up In Vivian Support

How many votes is a worker worth?

There is a possibility that Democrats working for the re-election of Congressman Weston Vivian could—if things go badly— learn the answer to that question.

At certain Democratic ward meetings which were called to discuss the coming campaign, several workers in the Democratic organization threatened a campaign strike unless Vivian makes a stronger stand on certain issues.

When asked his view of what happened at the meetings, Vivian answered, "Present were a few individuals who expect me to be a champion of the causes of the New Left. They said that if I did not do so, they would sit on their hands.”

"If that is their privilege and decision,” said Vivian, “I obviously can not count on their support, and would naturally ask those who do support me to fill those campaign roles which otherwise would go unfilled.”

Vivian continued, “I ask no one to support me if his conscience dictates otherwise, but I ask everyone who thinks I’ve done a credible job to support me."

Whether those campaign workers who have expressed dissatisfaction with some of Vivian’s stands support him or not has become a point of interest with some members of the party.

George Wahr Sallade, county Democratic chairman, said that he thought the Democratic organization would be completely behind Vivian.

Alan Jones, city chairman of the Democratic party, said that with a district like the Second Congressional District which has such a diversity of political opinion, it is difficult to please everyone. However, Jones said that he thought that everyone would be working and would back Vivian all the way.

Vivian himself also pointed out that the district he represents has a wide spectrum of opinion. Vivian said that ever since he took office, he has been under pressure from the different extremes in the Republican party and the Democratic party.

“I have no choice,” Vivian said, “but to resist the pressures from the extremes.”

The pressures Vivian is resisting now have to do with certain members of the party asking him to make a public, statement chastising the University for disclosing the names of students to the House Committee on Un-American Activities, and also to make a stronger stand in opposition to the Viet Nam war.

In answer to some of Vivian’s critics, Richard Riley, Democratic executive vice chairman for organization, said that Vivian has already gone on record regarding his opposition to HCUA when he voted against the appropriations to that committee.

Riley also commented that Vivian’s voting record speaks well for the man. Riley said that unlike many Republicans who back Johnson’s policy in Viet Nam all the way, Vivian has “offered constructive criticism of the President and has proposed alternatives.”

Riley said, “What dissension there is over the Viet Nam issue among certain workers in the party only reflects that the issue is a matter of concern to many persons. And I’m sure that most concerned people who have thought about it and who have compared Vivian’s past record with that of some Re-oublicans will, in all conscience, return Vivian to office.”