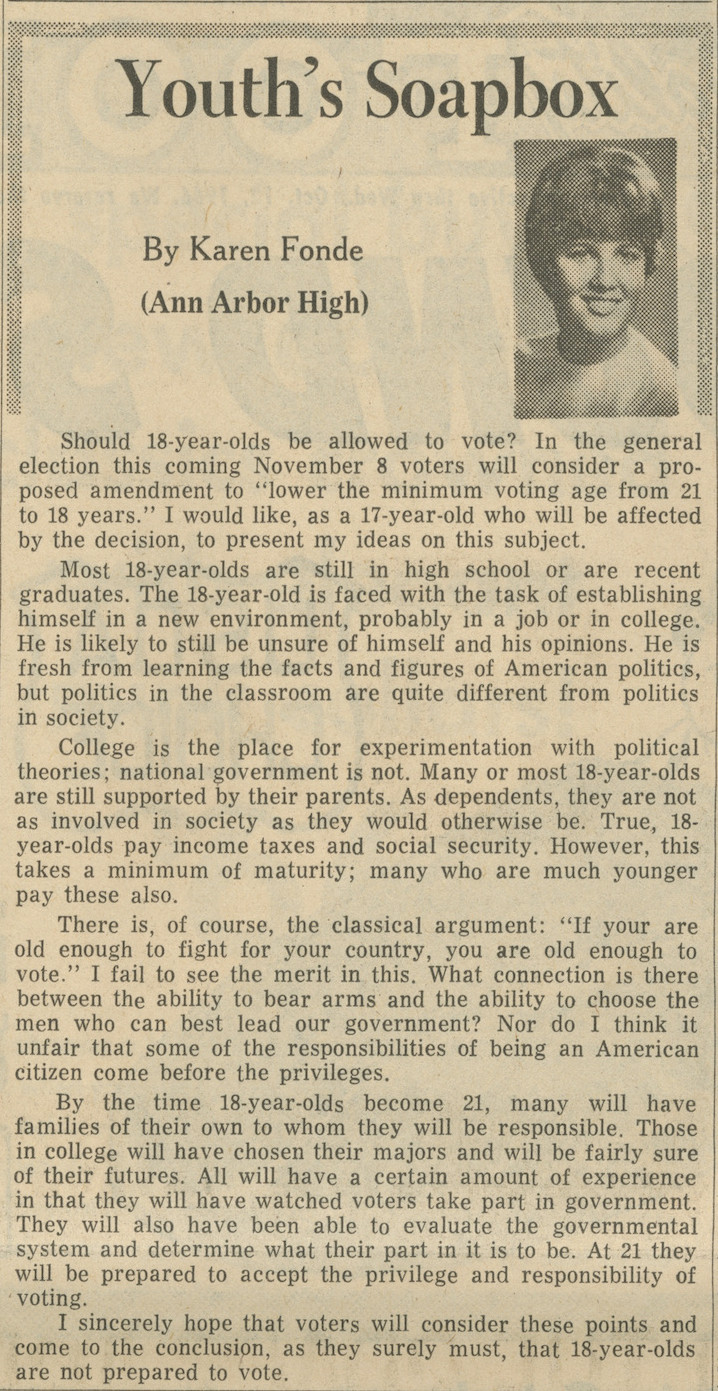 Youth's Soapbox
By Karen Fonde (Ann Arbor High)
Should 18-year-olds be allowed to vote? In the general election this coming November 8 voters will consider a proposed amendment to "lower the minimum voting age from 21 to 18 years." I would like, as a 17-year-old who will be affected by the decision, to present my ideas on this subject.
Most 18-year-olds are still in high school or are recent graduates. The 18-year-old is faced with the task of establishing himself in a new environment, probably in a job or in college. He is likely to still be unsure of himself and his opinions. He is fresh from learning the facts and figures of American politics, but politics in the classroom are quite different from politics in society.
College is the place for experimentation with political theories; national government is not. Many or most 18-year-olds are still supported by their parents. As dependents, they are not as involved in society as they would otherwise be. True, 18year-olds pay income taxes and social security. However, this takes a minimum of maturity; many who are much younger pay these also.
There is, of course, the classical argument: "If your are old enough to fight for your country, you are old enough to vote." I fail to see the merit in this. What connection is there between the ability to bear arms and the ability to choose the men who can best lead our government? Nor do I think it unfair that some of the responsibilities of being an American citizen come before the privileges.
By the time 18-year-olds become 21, many will have families of their own to whom they will be responsible. Those in college will have chosen their majors and will be fairly sure of their futures. All will have a certain amount of experience in that they will have watched voters take part in government. They will also have been able to evaluate the governmental system and determine what their part in it is to be. At 21 they will be prepared to accept the privilege and responsibility of voting.
I sincerely hope that voters will consider these points and come to the conclusion, as they surely must, that 18-year-olds are not prepared to vote.