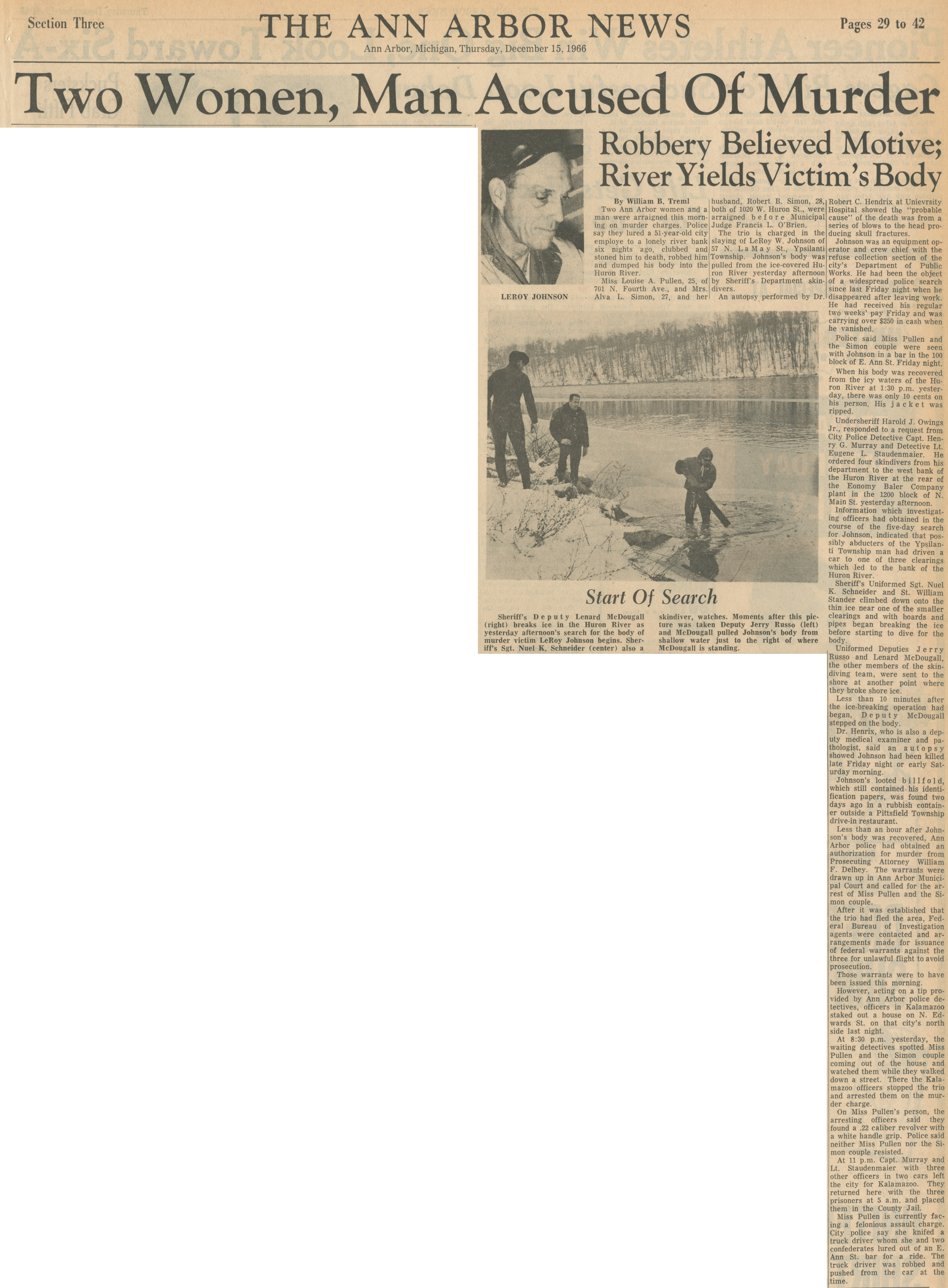 ﻿Section Three<br><br>THE ANN ARBOR NEWS<br><br>Pages 29 to 42<br><br>Ann Arbor, Michigan, Thursday, December 15,1966<br><br>Two Women, Man Accused Of Murder<br><br>Robbery Believed Motive; River Y ields V ictim’s Body<br><br>LEROY JOHNSON<br><br>By William B. Trenil<br><br>Two Ann Arbor women and a man were arraigned this morning on murder charges. Police say they lured a 51-year-old city employe to a lonely river bank six nights ago, clubbed and stoned him to death, robbed him and dumped his body into the Huron River.<br><br>Miss Louise A. Pullen, 25, of 701 N. Fourth Ave., and Mrs. Alva L. Simon, 27, and her<br><br>husband, Robert B. Simon, both of 1020 W. Huron St., were arraigned before Municipal Judge Francis L. O'Brien.<br><br>The trio is charged in slaying of LeRoy W. Johnson of 57 N. La May St., Ypsilanti Township. Johnson's body was pulled from the ice-covered Huron River yesterday afternoon by Sheriff's Department skin-divers.<br><br>An autopsy performed by Dr.<br><br>Start Of Search<br><br>Sheriff’s Deputy Lenard McDougall (right) breaks ice in the Huron River as yesterday afternoon’s search for the body of murder victim LeRoy Johnson begins. Sheriff’s Sgt. Nuel K. Schneider (center) also a<br><br>skindiver, watches. Moments after this picture was taken Deputy Jerry Russo (left) and McDougall pulled Johnson’s body from shallow water just to the right of where McDougall is standing.<br><br>Robert C. Hendrix at Unievrsity Hospital showed the “probable cause” of the death was from a series of blows to the head producing skull fractures.<br><br>Johnson was an equipment operator and crew chief with the refuse collection section of the city's Department of Public Works. He had been the object of a widespread police search since last Friday night when he disappeared after leaving work. He had received his regular two weeks’ pay Friday and was carrying over $250 in cash when he vanished.<br><br>Police said Miss Pullen and the Simon couple were seen with Johnson in a bar in the 100 block of E. Ann St. Friday night.<br><br>When his body was recovered from the icy waters of the Huron River at 1:30 p.m. yesterday, there was only 10 cents on his person. His jacket was ripped.<br><br>Undersheriff Harold J. Owings Jr., responded to a request from City Police Detective Capt. Henry G. Murray and Detective Lt. Eugene L. Staudenmaier. He ordered four skindivers from his department to the west bank of the Huron River at the rear of the Eonomy Baler Company plant in the 1200 block of N. Main St. yesterday afternoon.<br><br>Information which investigating officers had obtained in the course of the five-day search for Johnson, indicated that possibly abducters of the Ypsilanti Township man had driven a car to one of three clearings which led to the bank of the Huron River Sheriff’s Uniformed Sgt. Nuel K. Schneider and St. William Stander climbed down onto the thin ice near one of the smaller clearings and with boards and pipes began breaking the ice before starting to dive for the body.<br><br>Uniformed Deputies Jerry Russo and Lenard McDougall, the other members of the skin-diving team, were sent to the shore at another point where they broke shore ice.<br><br>Less than 10 minutes after le ice-breaking operation had began. Deputy McDougall stepped on the body.<br><br>Dr. Henrix, who is also a deputy medical examiner and pathologist, said an autopsy showed Johnson had been killed late Friday night or early Saturday morning.<br><br>Johnson's looted billfold, which still contained his identification papers, was found two days ago in a rubbish container outside a Pittsfield Township drive-in restaurant.<br><br>Less than an hour after John->n’s body was recovered, Ann Arbor police had obtained an authorization for murder from Prosecuting Attorney William F. Delhey. The warrants were drawn up in Ann Arbor Municipal Court and called for the arrest of Miss Pullen and the Simon couple.<br><br>After it was established that the trio had fled the area, Federal Bureau of Investigation agents were contacted and arrangements made for issuance of federal warrants against the three for unlawful flight to avoid prosecution.<br><br>Those warrants were to have been issued this morning.<br><br>However, acting on a tip provided by Ann Arbor police detectives, officers in Kalamazoo staked out a house on N. Edwards St. on that city’s north side last night.<br><br>At 8:30 p.m. yesterday, the waiting detectives spotted Miss Pullen and the Simon couple coming out of the house and watched them while they walked down a street. There the Kalamazoo officers stopped the trio and arrested them on the murder charge.<br><br>On Miss Pullen’s person, the arresting officers said they found a .22 caliber revolver with white handle grip. Police said neither Miss Pullen nor the Simon couple resisted.<br><br>At 11 p.m. Capt. Murray and t. Staudenmaier with three other officers in two cars left the city for Kalamazoo. They returned here with the three prisoners at 5 a.m. and placed them in the County Jail.<br><br>Miss Pullen is currently facing a felonious assault charge. City police say she knifed a truck driver whom she and two confederates lured out of an E. Ann St. bar for a ride. The truck driver was robbed and pushed from the car at the time.