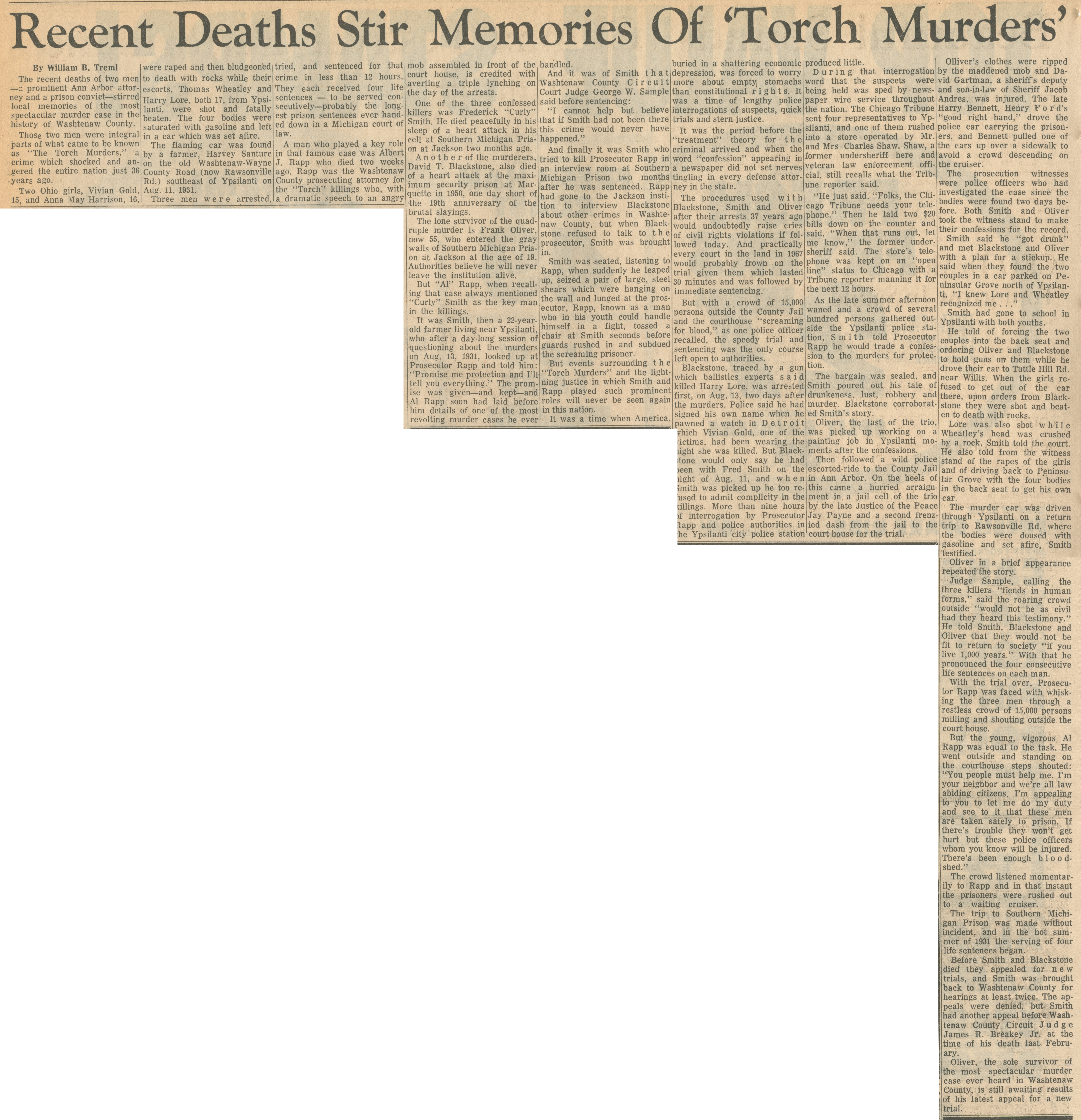 The recent deaths of two men —a prominent Ann Arbor attorney and a prison convict—stirred local memories of the most spectacular murder case in the history of Washtenaw County.

Those two men were integral parts of what came to be known as “The Torch Murders,” a crime which shocked and angered the entire nation just 36 years ago.

Two Ohio girls, Vivian Gold, 15, and Anna May Harrison, 16, were raped and then bludgeoned to death with rocks while their escorts, Thomas Wheatley and Harry Lore, both 17, from Ypsilanti, were shot and fatally beaten. The four bodies were saturated with gasoline and left in a car which was set afire.

The flaming car was found by a farmer, Harvey Santure on the old Washtenaw-Wayne County Road (now Rawsonville Rd.) southeast of Ypsilanti on Aug. 11, 1931.

Three men were arrested, tried, and sentenced for that crime in less than 12 hours. They each received four life sentences — to be served consecutively—probably the longest prison sentences ever handed down in a Michigan court of law.

A man who played a key role in that famous case was Albert J. Rapp who died two weeks ago. Rapp was the Washtenaw County prosecuting attorney for the “Torch” killings who, with a dramatic speech to an angry mob assembled in front of the court house, is credited with averting a triple lynching on the day of the arrests.

One of the three confessed killers was Frederick “Curly” Smith. He died peacefully in his sleep of a heart attack in his cell at Southern Michigan Prison at Jackson two months ago.

Another  of the murderers, David T. Blackstone, also died of a heart attack at the maximum security prison at Marquette in 1950, one day short of the 19th anniversary of the brutal slayings.

The lone survivor of the quadruple murder is Frank Oliver, now 55, who entered the gray walls of Southern Michigan Prison at Jackson at the age of 19. Authorities believe he will never leave the institution alive.

But “Al” Rapp, when recalling that case always mentioned "Curly” Smith as the key man in the killings.

It was Smith, then a 22-year-old farmer living near Ypsilanti, who after a day-long session of questioning about the murders on Aug. 13, 1931, looked up at Prosecutor Rapp and told him: “Promise me protection and I’ll tell you everything.” The promise was given—and kept—and Al Rapp soon had laid before him details of one of the most revolting murder cases he ever handled.

And it was of Smith that Washtenaw County Circuit Court Judge George W. Sample said before sentencing:

"I cannot help but believe that if Smith had not been there this crime would never have happened.”

And finally it was Smith who tried to kill Prosecutor Rapp an interview room at Southern Michigan Prison two months after he was sentenced. Rapp had gone to the Jackson institution to interview Blackstone about other crimes in Washtenaw County, but when Blackstone refused to talk to the prosecutor, Smith was brought in.

Smith was seated, listening to Rapp, when suddenly he leaped up, seized a pair of large, steel shears which were hanging on the wall and lunged at the prosecutor, Rapp, known as a man who in his youth could handle himself in a fight, tossed a chair at Smith seconds before guards rushed in and subdued the screaming prisoner.

But events surrounding the "Torch Murders” and the lightning justice in which Smith and Rapp played such prominent roles will never be seen again in this nation.

It was a time when America, buried in a shattering economic depression, was forced to worry more about empty, stomachs than constitutional rights. It time of lengthy police interrogations of suspects, quick trials and stern justice.

It was the period before the "treatment” theory for the criminal arrived and when the word “confession” appearing in a newspaper did not set nerves tingling in every defense attorney in the state.

The procedures used with Blackstone, Smith and Oliver after their arrests 37 years ago would undoubtedly raise cries of civil rights violations if followed today. And practically every court in the land in 1967 would probably frown on the trial given them which lasted 30 minutes and was followed by immediate sentencing.

But with a crowd of 15, 000 persons outside the County Jail and the courthouse “screaming for blood,” as one police officer recalled, the speedy trial and sentencing was the only course left open to authorities.

Blackstone, traced by a gun which ballistics experts killed Harry Lore, was arrested first, on Aug. 13, two days after the murders. Police said he had signed his own name when he pawned a watch in Detroit which Vivian Gold, one of the victims, had been wearing the light she was killed. But Blackstone would only say he had been with Fred Smith on the night of Aug. 11, and when Smith was picked up he too reused to admit complicity in the killings. More than nine hours of interrogation by Prosecutor Rapp and police authorities in the Ypsilanti city police station produced little.

During that interrogation word that the suspects were being held was sped by newspaper wire service throughout the nation. The Chicago Tribune sent four representatives to Ypsilanti, and one of them rushed store operated by Mr. and Mrs Charles Shaw. Shaw, a former undersheriff here and veteran law enforcement official, still recalls what the Tribune reporter said.

"He just said, “Folks, the Chicago Tribune needs your telephone.” Then he laid two $20 bills down on the counter and said, “When that runs out, let me know,” the former undersheriff said. The store's telephone was kept on an “open line” status to Chicago with a Tribune reporter manning it for the next 12 hours.

As the late summer afternoon waned and a crowd of several hundred persons gathered outside the Ypsilanti police station, Smith told Prosecutor Rapp he would trade a confession to the murders for protection.

The bargain was sealed, and Smith poured out his tale of drunkeness, lust, robbery and murder. Blackstone corroborated Smith’s story.

Oliver, the last of the trio, was picked up working on a painting job in Ypsilanti moments after the confessions.

Then followed a wild police escorted-ride to the County Jail in Ann Arbor. On the heels of this came a hurried arraignment in a jail cell of the trio by the late Justice of the Peace Jay Payne and a second frenzied dash from the jail to the court house for the trial.

Olliver’s clothes were ripped by the maddened mob and David Gartman, a sheriff’s deputy and son-in-law of Sheriff Jacob Andres, was injured. The late Harry Bennett, Henry Ford's “good right hand,” drove the police car carrying the prisoners, and Bennett pulled one of the cars up over a sidewalk to avoid a crowd descending on the cruiser.

The prosecution witnesses were police officers who had investigated the case since the bodies were found two days before. Both Smith and Oliver took the witness stand to make their confessions for the record.

Smith said he “got drunk” and met Blackstone and Oliver with a plan for a stickup. He said when they found the two couples in a car parked on Peninsular Grove north of Ypsilanti, “I knew Lore and Wheatley recognized me...”

Smith had gone to school in Ypsilanti with both youths.

He told of forcing the two couples into the back seat and ordering Oliver and Blackstone to hold guns on them while he drove their car to Tuttle Hill Rd. near Willis. When the girls refused to get out of the car there, upon orders from Blackstone they were shot and beaten to death with rocks.

Lore was also shot while Wheatley’s head was crushed by a rock, Smith told the court. He also told from the witness stand of the rapes of the girls and of driving back to Peninsular Grove with the four bodies in the back seat to get his own car.

The murder car was driven through Ypsilanti on a return trip to Rawsonville Rd. where the bodies were doused with gasoline and set afire, Smith testified.

Oliver in a brief appearance repeated the story.

Judge Sample, calling the three killers “fiends in human forms,” said the roaring crowd outside “would not be as civil had they heard this testimony." He told Smith, Blackstone and Oliver that they would not be fit to return to society “if you live 1,000 years.” With that he pronounced the four consecutive life sentences on each man.

With the trial over, Prosecutor Rapp was faced with whisking the three men through a restless crowd of 15,000 persons milling and shouting outside the court house.

But the young, vigorous Al Rapp was equal to the task. He went outside and standing on the courthouse steps shouted: “You people must help me. I'm your neighbor and we’re all law abiding citizens. I’m appealing to you to let me do my duty and see to it that these men are taken safely to prison. If there’s trouble they won’t get hurt but these police officers whom you know will be injured. There’s been enough blood-shed.”

The crowd listened momentarily to Rapp and in that instant the prisoners were rushed out to a waiting cruiser.

The trip to Southern Michigan Prison was made without incident, and in the hot summer of 1931 the serving of four life sentences began.

Before Smith and Blackstone died they appealed for new trials, and Smith was brought back to Washtenaw County for hearings at least twice. The appeals were denied, but Smith had another appeal before Washtenaw County Circuit Judge James R. Breakey Jr. at the time of his death last February.

Oliver, the sole survivor of the most spectacular murder case ever heard in Washtenaw County, is still awaiting results of his latest appeal for a new trial.