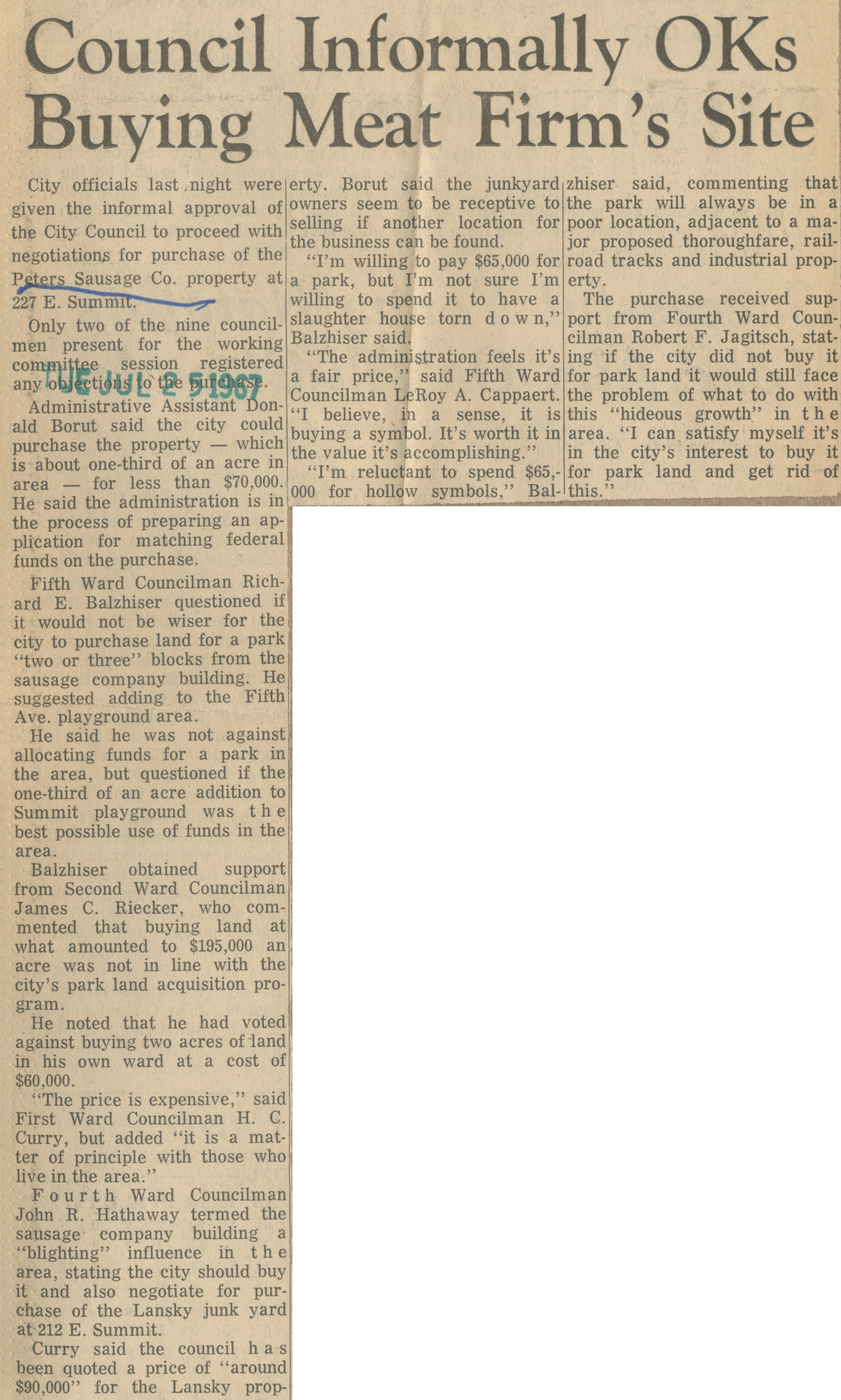 City officials last night were given the informal approval of the City Council to proceed with negotiations for purchase of the Peters Sausage Co. property at 227 E. Summit.

Only two of the nine councilmen present for the working committee session registered any objections to the purchase.

Administrative Assistant Donald Borut said the city could purchase the property -- which is about one-third of an acre in area -- for less than $70,000. He said the administration is in the process of preparing an application for matching federal funds on the purchase.

Fifth Ward Councilman Richard E. Balzhiser questioned if it would not be wiser for the city to purchase land for a park “two or three” blocks from the sausage company building. He suggested adding to the Fifth Ave. playground area.

He said he was not against allocating funds for a park in the area, but questioned if the one-third of an acre addition to Summit playground was the best possible use of funds in the area.

Balzhiser obtained support from Second Ward Councilman James C. Riecker, who commented that buying land at what amounted to $195,000 an acre was not in line with the city’s park land acquisition program.

He noted that he had voted against buying two acres of land in his own ward at a cost of $60,000.

“The price is expensive,” said First Ward Councilman H.C. Curry, but added “it is a matter of principle with those who live in the area.”

Fourth Ward Councilman John R. Hathaway termed the sausage company building a “blighting” influence in the area, stating the city should buy it and also negotiate for purchase of the Lansky junk yard at 212 E. Summit.

Curry said the council has been quoted a price of “around $90,000” for the Lansky property. Borut said the junkyard owners seem to be receptive to selling if another location for the business can be found.

“I’m willing to pay $65,000 for a park, but I’m not sure I’m willing to spend it to have a slaughter house torn down,” Balzhiser said.

“The administration feels it’s a fair price,” said Fifth Ward Councilman LeRoy A. Cappaert. “I believe, in a sense, it is buying a symbol. It’s worth it in the value it’s accomplishing.”

“I’m reluctant to spend $65,000 for hollow symbols," Balzhiser said, commenting that the park will always be in a poor location, adjacent to a major proposed thoroughfare, railroad tracks and industrial property.

The purchase received support from Fourth Ward Councilman Robert F. Jagitsch, stating if the city did not buy it for park land it would still face the problem of what to do with this “hideous growth” in the area. “I can satisfy myself it’s in the city’s interest to buy it for park land and get rid of this.”