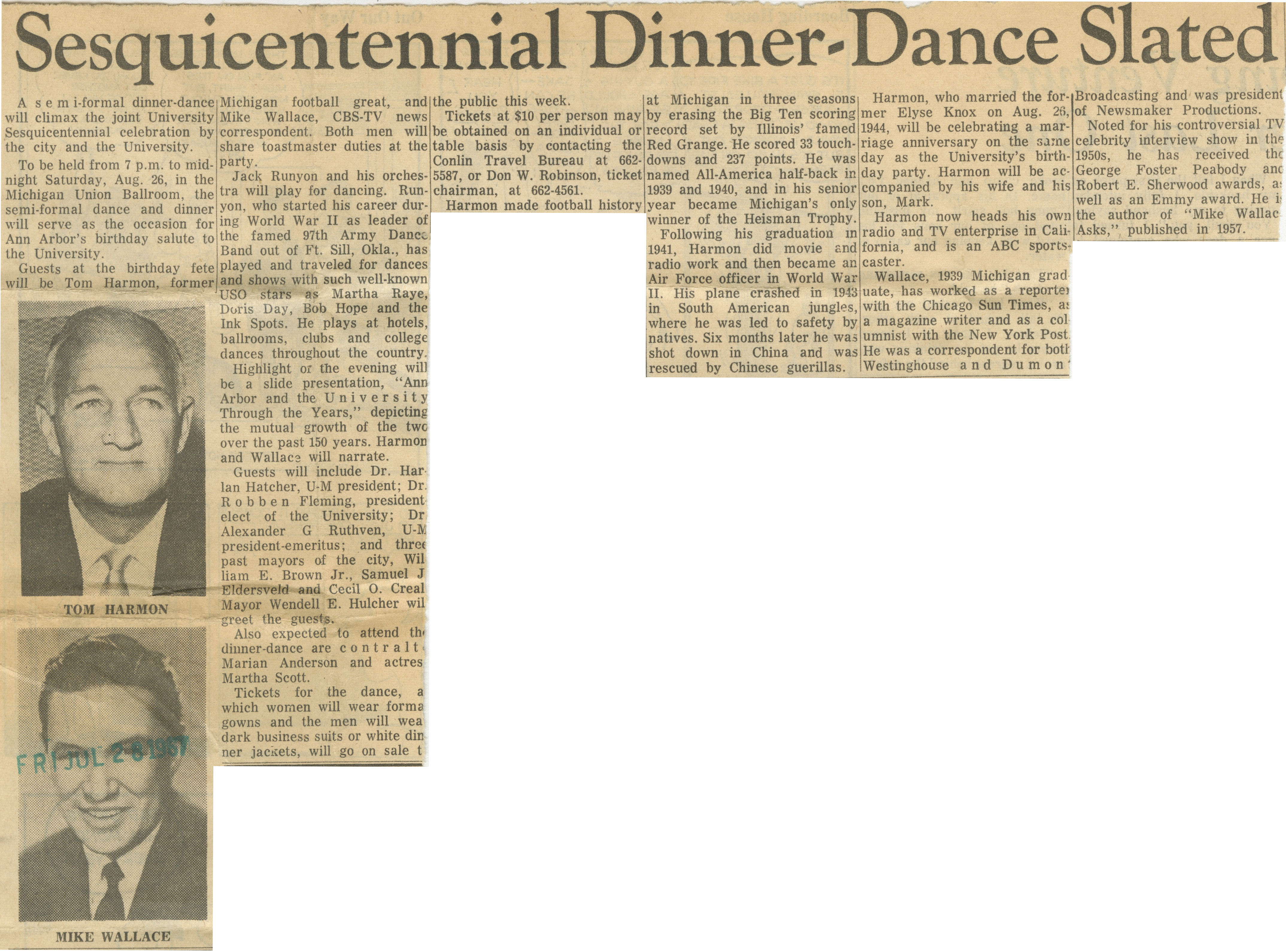 A semiformal dinner-dance will climax the joint University Sesquicentennial celebration by the city and the University.

To be held from 7 p.m. to midnight Saturday, Aug. 26, in the Michigan Union Ballroom, the semi-formal dance and dinner will serve as the occasion for Ann Arbor’s birthday salute to the University.

Guests at the birthday fete will be Tom Harmon, former Michigan football great, and Mike Wallace, CBS-TV news correspondent. Both men will share toastmaster duties at the party.

Jack Runyon and his orchestra will play for dancing. Runyon, who started his career during World War II as leader of the famed 97th Army Dance Band out of Ft. Sill, Okla., has played and traveled for dances be" Tom Harmon, former and shows with such well-known USO stabs as Martha Raye, Doris Day, Bob Hope and the Ink Spots. He plays at hotels, ballrooms, clubs and college dances throughout the country.

Highlight or the evening will be a slide presentation, “Ann Arbor and the University Through the Years,” depicting the mutual growth of the two over the past 150 years. Harmon and Wallace will narrate.

Tickets for the dance, a which women will wear formal gowns and the men will wear dark business suits or white dinner jackets, will go on sale to the public this week.

Harmon made football history at Michigan in three seasons by erasing the Big Ten scoring record set by Illinois’ famed Red Grange. He scored 33 touchdowns and 237 points. He was named All-America half-back in 1939 and 1940, and in his senior year became Michigan’s only winner of the Heisman Trophy.

Following his graduation in 1941, Harmon did movie and radio work and then became an Air Force officer in World War II. His plane crashed in 1943 in South American jungles, where he was led to safety by natives. Six months later he shot down in China and was rescued by Chinese guerillas.

Harmon, who married the former Elyse Knox on Aug. 26, 1944, will be celebrating a marriage anniversary on the same day as the University’s birthday party. Harmon will be accompanied by his wife and his son, Mark.

Harmon now heads his own radio and TV enterprise in California, and is an ABC sports-caster.

Wallace, 1939 Michigan graduate, has worked as a reporter with the Chicago Sun Times, a magazine writer and as a columnist with the New York Post He was a correspondent for both Westinghouse and Dumon Broadcasting and was president of Newsmaker Productions.

Noted for his controversial TV celebrity interview show in the 1950s, he has received the George Foster Peabody and Robert E. Sherwood awards, as well as an Emmy award. He  is the author of "Mike Wallace Asks,” published in 1957.